Carers of the World vs. Covid-19 Criminals 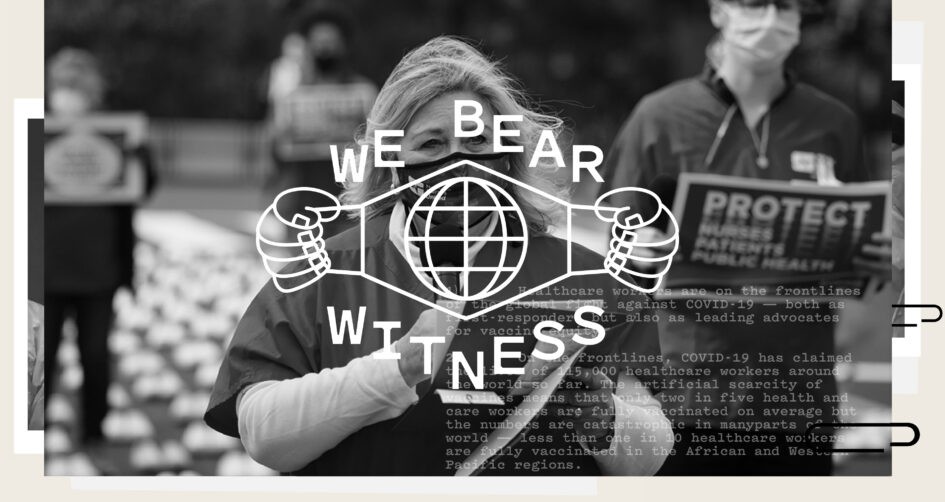 The pandemic rages on — not by accident, but by design.

As we enter the third year of the Covid-19 crisis, two battles are underway. One is led by the carers of the world in overcrowded hospitals, fighting to end the pandemic. Another is by corporate executives in closed boardrooms, fighting to prolong it.

The question at the very center of both is this — who will control medical recipes worth billions of dollars, and millions of lives?

As some countries roll out booster programs, less than 6% of Africa’s more than a billion people have been fully inoculated. Big pharmaceutical companies are letting the pandemic go on — and why not, according to a recent estimate, Pfizer is expected to make astronomical profits —$107bn in cumulative sales by the end of 2022 on its Covid-19 vaccines, now being dubbed a “megablockbuster.” Key to this is complete control over production, price, and profit. If more of our factories, wherever they might be, could start producing vaccines for the people in their countries, companies like Pfizer would lose their monopoly. They know this.

Right now, the World Trade Organization is considering a proposal that would temporarily waive patent protections on vaccine recipes. Over 164 countries have supported it. But the pharmaceutical industry is fighting back, hard —through the governments it lobbies. The European Union, the United Kingdom, Switzerland, Norway, and Singapore have successfully blocked it for over a year.

But as the ministers convene, once again, in Geneva on November 30, a new global movement is readying its fight: 2.5 million nurses are taking these Covid-19 criminals to court. In an unprecedented move, unions from 28 countries, coordinated by the Global Nurses United and the Progressive International — have filed a complaint with the United Nations alleging human rights violations by these countries during the Covid-19 pandemic, whose end, they write “is nowhere in sight.”

In a closed-door meeting about how to get more vaccines to the world’s poorest people, the chief executive of Pfizer attacked Dr. Tedros, the head of the World Health Organization for speaking “emotionally” when he called for greater balance in the global distribution of vaccines. From Brazil to India, the United States to Taiwan, nurses are bringing their emotions to bear. They have been on the frontlines of the COVID-19 pandemic response and witnessed the staggering numbers of deaths and the immense suffering caused by political inaction. From the frontlines, they prepare to hold these countries to account with a rallying cry: We, who care — we bear witness. Now, we testify.

The nurses’ complaint is not simply a legal fight: it is radical call to expose and defeat the governments that have been holding the lives of peoples’ hostage in order to service corporate super profits.

The leaders of these nations have been explicit about the world they seek to build: Early in the pandemic, the UK parliament’s foreign affairs select committee called for a “G20 for public health.” This is a revealing analogy.  Much like the G20, these countries have, in effect, hijacked international institutions and actively undermined the sovereignty of other nations, while enjoying complete impunity for their actions.

Consider the principal opponent to the waiver proposal at the WTO: the EU. In May 2020, European Parliamentarians, the only members directly elected by citizens in the EU system, voted to back the waiver to “address global production constraints and supply shortage.” Yet, for the next six months, the European Commission, which negotiates on behalf of Europe at the WTO has stubbornly resisted the waiver. This is entirely unsurprising if we look at who the European commissioners and their cabinets meet: Since March 2020, they have had 161 meetings with Big Pharma in the same timeframe that they managed to meet one NGO in favour of the waiver.

Nothing stood in their way as they throttled democracy and gave free reign to a deadly virus. Not global health organizations, two-thirds of which are headquartered in the US, UK, and Switzerland. Not international institutions, whose austerity agendas, have over decades, decimated public health systems in developing nations even as 83% of all government health spending occurred in the affluent world. Not the Bill and Melinda Gates Foundation — which it turns out, urged Oxford to reverse their decision to share their vaccine technology with the world.

The Covid-19 criminals have made their disregard for universal human rights and international law clear. It is now up to us to reclaim the enormous power that the UN charter, the WTO, WHO, and international law hold and deploy them as tools. That is why this transnational coalition is moving the Special Procedures of the UN Human Rights Council — to investigate — and find against the governments in question.

In the complaint addressed to Dr. Tlaleng Mofokeng, the UN Special Rapporteur for Physical and Mental Health, we articulated our demands:

First, undertake an urgent mission to the World Trade Organization: For too long, these countries have been wholly unaccountable, disguising their submission to corporate interests behind technical jargon. Their days of impunity are over.

Second, make a determination that the obstruction of the waiver constitutes a continuing breach of these governments’ obligations to guarantee the right to physical and mental health of everyone. Healthcare is our right. What we’re witnessing cannot be defined as an inefficiency in our system, or the failure of our politics — it is, in no uncertain terms — a crime against us all.

The nurses have given their testimony: “These countries have violated our rights and the rights of our patients — and caused the loss of countless lives —  of nurses and other caregivers and those we have cared for.”

Today is the day the historic case of the Carers of the World vs. Covid-19 Criminals begins.

Add your name HERE. At 100,000 signatures, the petition with your signature will reach the UN Human Rights Council.

Varsha Gandikota-Nellutla is the coordinator of the Progressive International’s policy wing, Blueprint.

Prosecutors found to be the criminals in NYC

Capitalist World Leaders Are To Blame for COVID Nightmare

What Can the World Learn from China’s Approach to Covid-19?