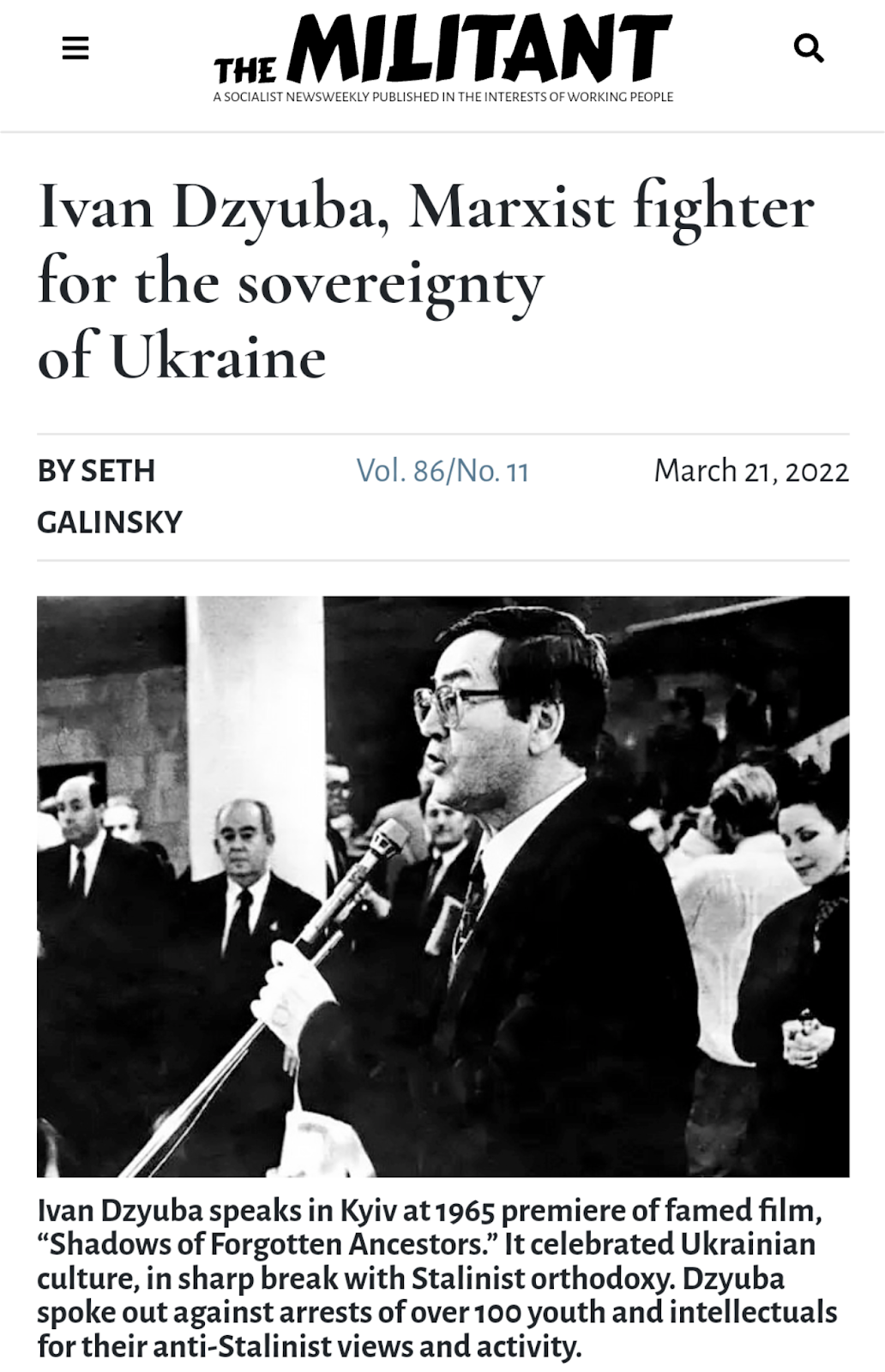 Ivan Dzyuba died Feb. 22 at the age of 90, ironically on the eve of Moscow’s invasion of Ukraine. Dzyuba was a literary critic and Marxist who was jailed by the then-Stalinist Soviet government of Ukraine in 1973 for his defense of political rights and of V.I. Lenin’s views on the right of Ukraine and other oppressed nations to self-determination. Lenin was the central leader of the 1917 Bolshevik Revolution that overthrew the czarist regime in Russia.

“I have always endeavored to consider nationality problems — just as, in fact, all other problems — from the viewpoint of the principles of scientific Communism and of the teaching of Marx, Engels and Lenin,” Dzyuba said in 1969 when he published his book Internationalism or Russification?  “perceiving the prospects for their successful solutions to lie along the road towards the fulfillment of Lenin’s legacy and Communist construction.”

Dzyuba was born in 1931 in the Donbas coal-mining region of eastern Ukraine, which is currently under the control of Moscow-backed separatist gangs. By 1962 he was a well-known writer and head of literary criticism at Vitchyzna  magazine, but was removed, accused of “ideological mistakes.”

By that time he had joined with others fighting to recover the cultural and literary heritage of Ukraine, as part of a growing anti-Stalinist revolutionary movement in Ukraine and across Russia. This came on the heels of Communist Party leader Nikita Khrushchev’s 1956 revelations of the tip of the iceberg of Joseph Stalin’s crimes in power, as well as the powerful working-class rebellion in Hungary that year.

Layers of working people, writers and artists in the Soviet Union, including Ukraine, were chafing at the oppressive policies and actions of the bureaucracy that came to power in the Stalinist counterrevolution in the Soviet Union after Lenin’s death.

On Sept. 4, 1965, at the premiere of “Shadows of Forgotten Ancestors,” a film that broke with the Stalinist-imposed historiography of Ukraine, Dzyuba, Vyacheslav Chronovil and Vasyl Stus spoke to a packed theater. They denounced the arrests earlier that year of more than 100 young people and “intellectuals” across the country for their anti-Stalinist political views.

That December Dzyuba wrote to the Central Committee of the Communist Party of Ukraine and the Council of Ministers of the Ukrainian Soviet Socialist Republic to call for an end to the “most frightful injustice” of this political persecution.

Dzyuba wrote, “It is no secret that during recent years a growing number of people in the Ukraine, especially among the younger generation (not only students, scientists and creative writers and artists, but also now quite often, workers), have been coming to the conclusion that there is something amiss with the nationalities policy in the Ukraine.” In fact, he said, the people of Ukraine face “perpetual, flagrant violations of Marxism-Leninism on the nationalities question, and the abandonment of scientific principles in communist national construction.”

To further an open discussion and debate on these questions he sent them the manuscript of his book Internationalism or Russification?  later published in Russian, English and Ukrainian editions.

That book — distributed in English at the time by Pathfinder Press — is a cogent explanation of Lenin’s view of the necessity for communists to support the right of oppressed nations in the Soviet Union and elsewhere to self-determination, including independence if they so choose.

Dzyuba describes the flowering of culture in Ukraine during the early years of the Bolshevik Revolution under Lenin’s leadership. He notes that “the Ukrainian language was introduced into all spheres of social, civic and industrial life, knowledge of Ukrainian history and culture was fostered; there developed a sense of national belonging and of the national duties of a Ukrainian communist.”

He described how the bloody Stalinist counterrevolution overturned the gains made by the Bolshevik Revolution in relation to Ukraine and other nations.

Standing up to Jew-hatred

Dzyuba also played a key role in speaking out against antisemitism. On Sept. 29, 1966, he joined a spontaneous action of thousands at Babyn Yar in defiance of Stalinist authorities to commemorate the 25th anniversary of the beginning of the Nazi massacre of 100,000 Jews and tens of thousands of others in that ravine in Kyiv.

When participants realized that Dzyuba and other writers were there, they demanded they speak. “Babyn Yar is a tragedy of all mankind but it happened on Ukrainian soil. And therefore, a Ukrainian has no right to forget it anymore than a Jew,” Dzyuba told the crowd. “It seems that Lenin’s instructions concerning the struggle against antisemitism are forgotten in the same way as his precepts regarding national development of the Ukraine.”

In 1972 Dzyuba was expelled from the Writers’ Union, arrested and sentenced to prison. After 18 months in jail he signed a statement saying his writings were the work of a “mistaken man,” and appealed for clemency, which he was granted. He was able to get work as a proofreader of the factory newspaper at the Kyiv Aviation Plant.

After getting out of jail Dzyuba was less politically active, focusing more on literary projects. But after the implosion of the Stalinist regime in the Soviet Union in 1991, he became minister of culture of an independent Ukraine from 1992 to 1994. He wrote a preface in 2018 to a forthcoming translation into Ukrainian of Capital  by Karl Marx.

In the last chapter of Internationalism or Russification?  Dzyuba wrote that Stalin “destroyed several million Ukrainians but did not destroy the nation. And no one ever will.” Words that remain true to this day.

The book is well worth reading today.

Ivan Dzyuba, Marxist fighter for the sovereignty of Ukraine

Celebrate 63rd anniversary of the revolution in Cuba