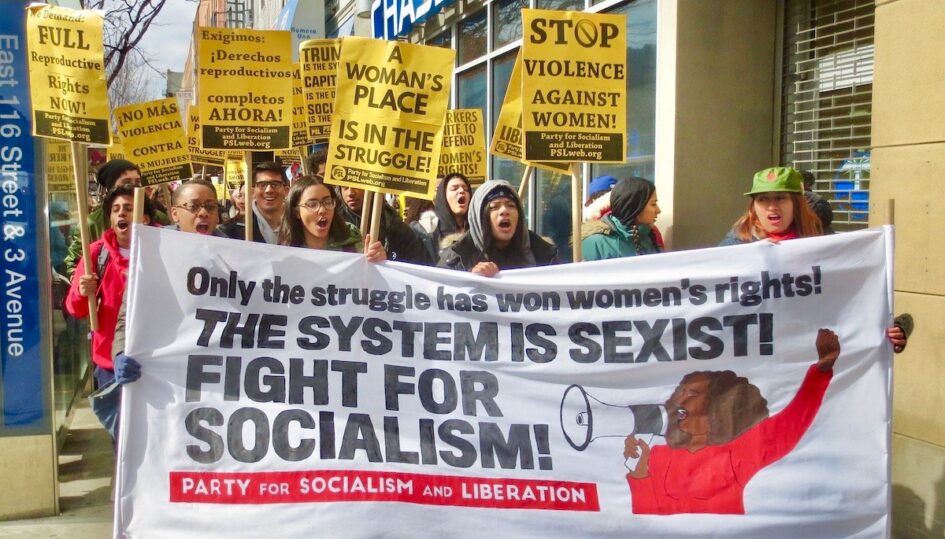 For over a hundred years, women and progressive people have celebrated working women’s right to rebel and the many wins our rebellion has secured. International Women’s Day, March 8, is a day to celebrate the powerful force of our participation and gains won by our movements, the movements of the multinational, multi-gender working class. IWD has and is organized to highlight the struggle for women’s economic, social, and political achievements and to continue the struggle for full equality.

Alexandra Kollontai, celebrating IWD’s precursor Working Women’s Day, remarked, “But rights alone are not enough. We have to learn to make use of them.” Women in struggle, the women of the working class, make use of our rights by breaking the chains which hold us back from true liberation. We lead in the struggles for workers’ rights, to cancel rent and stop evictions, as victims of police terror who refuse to back down, and against imperialist war. We organize the world workers deserve, the world we can and should run.

International Women’s Day means acknowledging the root cause of women’s oppression—class society—and its centrality to the system that oppresses and exploits our class today—capitalism. IWD was originally organized by socialists and women revolutionaries fighting for a better world because they recognized that without undoing and replacing capitalism we could not do away with women’s oppression. Today’s socialist revolutionaries are engaged in a similar struggle—building consciousness with and amongst other workers with the aim of winning over the masses to the popular demands that are winnable under socialism. From the right to abortion, to housing, healthcare, education and safety from violence, we target the symptom’s of women’s oppression under capitalism as we build the struggle for socialism.

During times of global crisis, when conditions for working class women have become even more dire than they were before, the spirit of IWD must be strengthened. During the crisis exacerbated by the COVID-19 pandemic, women have suffered as front line workers, first responders, essential workers, and primary caretakers.

At the beginning of the pandemic over 50 million workers lost their jobs, not because there were no jobs but because the capitalist class had no solutions to the crisis. These job losses hit working women particularly hard. Twice as many women are being forced out of the workforce as men. In December of 2020, all of the 140,000 jobs lost were jobs held by women. With little to no government aid for women workers, we have borne the brunt of the health and economic crisis. To this day, capitalism still has no solutions to the crisis of joblessness and has made working conditions worse for all.

How have women fought back against increasingly immiserating conditions? Women workers have engaged in a myriad of different organizing and community care efforts to combat these conditions. For example, teachers and school staff—mostly women—created programs to vaccinate students while major city and government officials could not adequately distribute vaccines and the wealthiest nations hoarded vaccines. Those fighting for vaccine equity world-wide have included working women. It has been working women on the front lines combatting the virus, including healthcare workers, custodial staff, teachers and community volunteers.

From the nationwide revolt against racism to workers struggles and the continued fight for reproductive rights, women are playing critical roles to win immediate demands and to win a world in which women and all oppressed people are truly free. Two plus years of the COVID-19 pandemic reveals the critical need for building solidarity among all women living in the conditions created by the capitalist exploitation and oppression that benefit such a tiny few.

As we celebrate IWD in 2022, we are fighting to defend the right to abortion provided by Roe v. Wade and demanding full access to abortion through legalization. The conservative leaning Supreme Court is considering yet another challenge to Roe v. Wade, which enshrined the right to abortion because a militant women’s movement fought for it. But access to abortion is still not guaranteed. Just a few years after Roe v. Wade, the Hyde Amendment made abortion inaccessible to women on Medicaid and restricted the use of federal funds for abortion. Hyde was upheld by the Supreme Court in 1980. Reproductive rights are not a given under capitalism; they are fought for and defended in the streets. As the right wing crafts laws in all 50 states to take away our rights to abortion, the movement for abortion rights is also being revitalized. The fight for working women’s control over our bodies must prioritize making abortion accessible to all. Reproductive rights, like every other major contradiction in the United States, can be boiled down to one question: Who holds the power to determine their own fate? At this moment the people do not have the power to control our own reproduction. It is our duty to stop the lies and stigma about abortion, organize for full reproductive health care for all and continue to open the doors for women to militantly persist in struggle and ultimately win abortion once and for all.

Women are organizing ourselves while we are fighting for socialism. The fight for public education, childcare, maternity leave, jobs, health care, immigrant rights, housing, and the end of police brutality and racism are all women’s issues. They are all struggles that the working class has to win. It is only the working class that holds the potential to win over the masses and fight for a socialist revolution. Members of the Party for Socialism and Liberation commit ourselves to struggle for a world we know women deserve. On International Women’s Day we salute the past and present demands for the socialist transformation of society, including the autonomy of working women. Become a member of the Party for Socialism and Liberation to unite and move the millions into long lasting change for women and the working class.

‘Through war and devastation to light, labor, and knowledge’Bolshevik poster celebrating the fourth…

‘United we stand, divided we fall’: celebrating the life of Fred Moore

Twin Cities takes to the streets for International Women’s Day