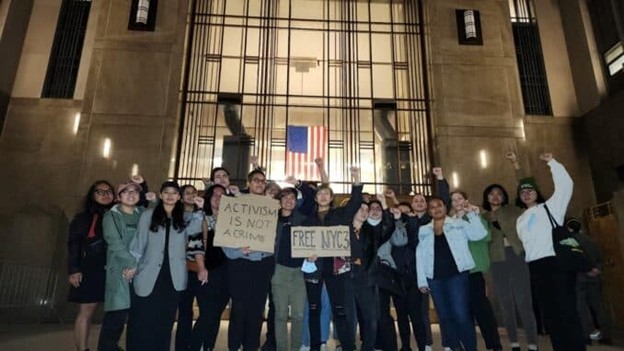 NYC protest demands drop the charges against the Makibeki NYC 3.
(Fight Back! News/staff)

New York, NY – Charges against the Makibeki NYC 3 have or will be dismissed, defeating legal attacks that came after the protests against the president of the Philippines this past fall.

That’s when pro-democracy organizers held a week of demonstrations against Philippines President Ferdinand “Bongbong” Marcos, Jr., who was visiting the United Nations. Marcos’ father, Ferdinand Marcos Sr., declared martial law in the Philippines 50 years ago, and reigned over a 20-year dictatorship. Now his son, Marcos Jr., is presiding over a period of rampant human rights abuses, including arbitrary arrests and detention of political prisoners, including human rights defenders, peasants, indigenous leaders and workers.

The protests on September 23 included a sit-in at the entrance of the Asia Society auditorium, which had invited Marcos Jr. to speak. The eleven activists involved in the sit-in chanted, “Never forget, never again, never again to martial law,” and held a banner that read “Hold Marcos-Duterte accountable – no to fascist dynasties.” The event’s private security guards responded by violently removing the demonstrators, dragging them across the floor of the building, throwing them into an elevator, pulling on their hair, clothes, and limbs, and damaging their clothes.

As the Marcos motorcade left the event, several activists engaged the motorcade and continued chanting “The blood debts of the fascist regime must be paid!” As the vehicles drove away, a security agent tackled one of the organizers and had them arrested for allegedly throwing “a red substance” onto the Marcos motorcade. The crowd verbally confronted the security agents who responded by dragging two more of the activists from the crowd and arresting them. The three arrested activists have become known as the Makibeki NYC 3.

The abuse of the Makibeki NYC 3 did not end with their arrests, however, and all three of them were constantly misgendered and harassed by NYPD officers during their 24-hour detention. After the Makibeki NYC 3’s release from jail, the pro-democracy forces involved in organizing the week of direct actions continued to demand that all charges be dropped.

Bernadette Elorin of BAYAN USA stated, “Activism is not a crime. Exerting our democratic rights to genuine change should not be punished.”

The U.S. will drop Zelensky as easily as it dropped Noriega

The Union Membership Rate Has Dropped to a Historic Low. It Doesn’t Have to Be This Way.