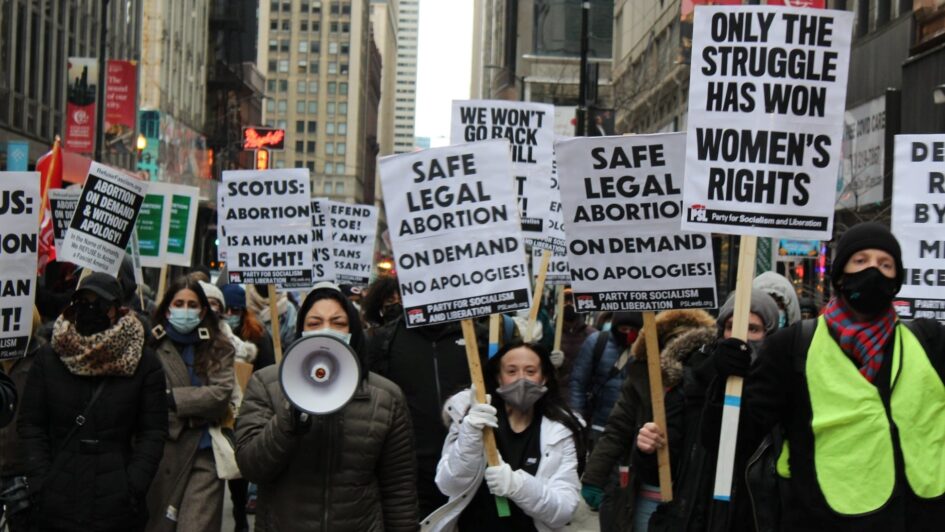 On Jan. 8, more than 100 people in Chicago took to the streets to oppose the annual, so-called “March for Life.” Every year in January, anti-abortion and fascist forces from across the region gather in Chicago as part of national mobilizations against the Roe v. Wade decision. For years, abortion and reproductive rights groups have counter-protested this right-wing gathering to make sure that their anti-woman, anti-LGBTQ rhetoric does not go unchallenged.

This year’s counter-protest was one of the largest in recent memory, with attacks on reproductive rights driving more people onto the streets. Many organizations in the city answered the call to show up and defend abortion rights. The anti-abortion forces set up in Federal Plaza in downtown Chicago with a large stage and sound system, and the counter-protesters gathered across the street. Dozens of Chicago police officers, including several with truncheons, deployed between the two groups.

Speakers at the counter protest included members of Chicago For Abortion Rights, the Chicago Teachers Union, Chicago Democratic Socialists of America, and more. Eli Gallegos, speaker from the Party for Socialism and Liberation, said, “We must all dedicate our time to the struggle for reproductive rights. For a world where abortion is free, on demand and accessible for all.”

The anti-abortion forces showed their true colors by marching alongside open fascists. Fascists also rallied alongside the March for Life in 2019. When the larger March for Life was canceled in 2021 because of COVID, The Patriot Front held a rally of their own in the Loop.

Online videos show some March for Life attendees heckling the fascists for their attire at this year’s march, but those videos don’t provide a complete view of the situation on the ground. Parts of the raucous anti-abortion crowd also booed Cardinal Blase Cupich, head of the Catholic Church in Chicago, when he spoke. Most tellingly, Chicago police made little effort to keep the fascists separate from the rest of the anti-abortion crowd, seeing little risk of conflict if the two groups mingled. In contrast, police were constantly moving to keep between the anti-abortion march and reproductive rights advocates.

Counter protesters confronted the anti-abortion marchers and their fascist allies at multiple points along their route. Despite being outnumbered by the anti-abortion crowd and their police escort, they made sure to show that there is a resistance in the streets to the attempts to roll back abortion rights. Speakers at the end of the event promised to keep the struggle in the streets going, and to continue to organize against anti-abortion and fascist forces locally and nationwide.

Feature photo: Protesters take to the streets of Chicago to oppose the anti-abortion “March for Life” on Jan. 8, 2022. Liberation photo