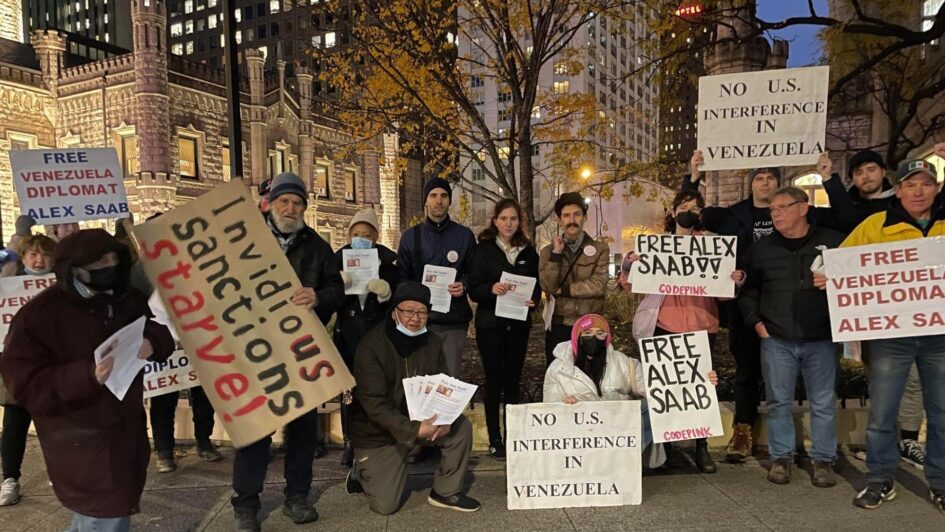 On Nov. 15, activists from a variety of Chicago anti-war organizations gathered in Chicago’s Magnificent Mile shopping district to call for the release of Venezuelan diplomat Alex Saab. Representatives from Code Pink, Jewish Voice for Peace, PSL Chicago and Chicago ALBA Solidarity gathered to raise awareness about the illegal arrest of Saab during a diplomatic mission to procure medical supplies.

The anti-imperialist activists chanted, flyered, and held signs during the evening commute to draw attention to the case. Organizer Danaka Katovich from Code Pink was proud of the showing. “There were a lot of people passing by and we had so many signs!” she told Liberation News.

Alex Saab was illegally detained in June 2020 when his diplomatic flight to Iran stopped to refuel in Cabo Verde, Africa, and local security forces pulled him from the plane. A special envoy of the Venezuelan government, he is currently fighting illegal extradition to the U.S. for the “crime” of trying to procure humanitarian supplies of food, fuel and medicine from Iran in violation of illegal U.S. sanctions.  The United Nations Human Rights Committee has called for his release.