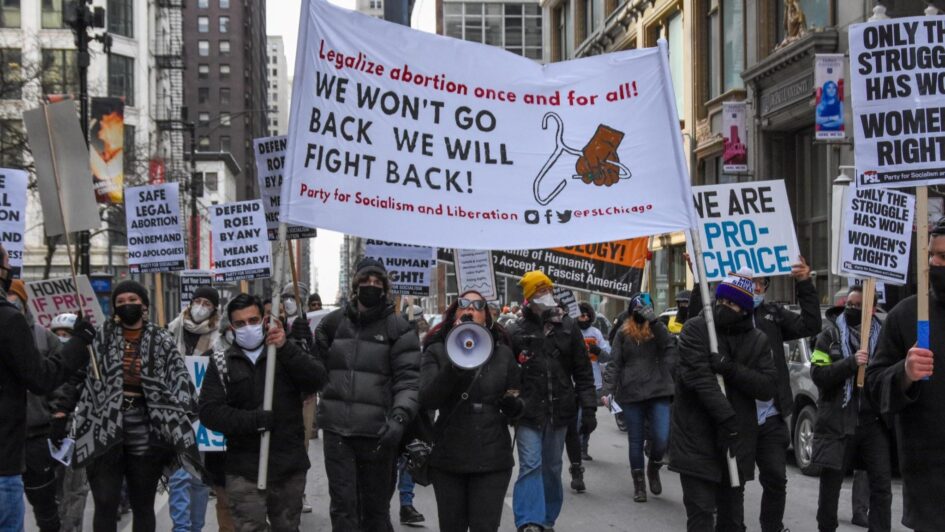 In commemoration of the 49th anniversary of the landmark decision in Roe v. Wade, activists and community members came out into the streets of Chicago to protest crisis pregnancy centers and demand the federal legalization of abortion.

Organized by the Party for Socialism and Liberation and Reproductive Transparency Now, the action was held outside “Aid for Women,” one of several CPCs in the Chicagoland area. Located in the heart of downtown Chicago, Aid for Women, like all CPCs, peddles lies and pseudoscientific misinformation to manipulate, deceive and misinform women seeking abortions.

CPCs: “nothing but lies”

Lisa Battisfore, founder of Reproductive Transparency Now, spoke about some of the insidious tactics used by CPCs in their campaign against abortion rights: “They advertise themselves as if they are abortion clinics so that when you’re searching for them online, they’re the first things that pop up. They also have referral services so that you get referred to them if you say you’re seeking an abortion, but when you get there, you get nothing but lies and pamphlets telling you that if you get an abortion, you will die; you will get breast cancer; you will never have kids again.”

There are more than 20 of these crisis pregnancy centers throughout the Chicagoland area, with three of them operating within the city limits.

In addition to fighting against fake clinics, protesters demanded that the right to abortion be legalized and protected on a federal level. Alex Mantzoros, an organizer with PSL, stressed that, “We must continue to fight for the few protections we do have, and we must demand that abortion be made legal outright, the bare minimum in the fight towards full reproductive justice.”

Illinois occupies an important position in the broader context of abortion rights throughout the Midwest and parts of the South. Known for its protections of reproductive healthcare, Illinois has become a destination for abortion-seeking women from Indiana, Missouri and other states where it is exceedingly difficult to access abortion services. Should Roe be overturned, every state that borders Illinois is expected to severely restrict women’s right to abortion, threatening to overwhelm existing abortion providers.

It is precisely Illinois’s protections on abortion that make it a prized conquest of the anti-abortion offensive. In recent months, activists and organizers have been mobilizing against an uptick in violence and reaction in Chicago. In May 2021, community members came out in support of a Planned Parenthood clinic that was vandalized. Earlier this month, the so-called “March for Life” descended on Chicago and was met by a militant counterprotest.

Stand up, fight back!

Protesters marked the anniversary of Roe by continuing this tradition of militant fightback. Chants asserting our need to stand up and fight back against sexist bigotry rang throughout the streets of downtown Chicago, echoing the struggle of the women’s movement which won Roe v. Wade in the first place.

In her closing remarks, Mantzoros reminded the crowd that, “In the United States, a majority of the population already supports Roe v. Wade and abortion access. Half of our work is already done for us. What we need to do now is organize and take action.”