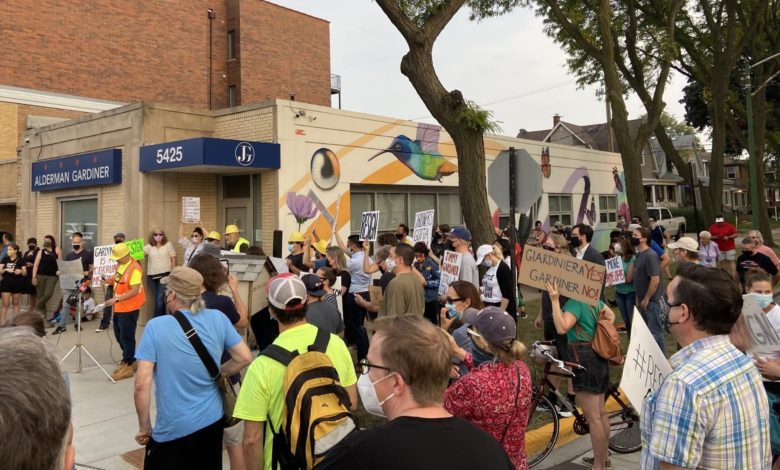 Newly released screenshots of texts from Chicago Alderman Jim Gardiner (45th District) show that Gardiner used his aides as well as city resources to not only stalk constituents, but also stall projects and block constituents from getting city help.

Gardiner, who has been in office since 2019, is infamously known for falsely filing a stolen cellphone report, which led to police harassment of an innocent man. According to the lawsuit, the police told the man being harassed. “I believe you. I wasn’t going to arrest you, but this person has power and I have bosses.”

The texts were first leaked by the community website the Peoples Fabric and verified by local media including Block Club Chicago. They show a pattern of verbal abuse, including homophobia and misogyny, which even lead to a restraining order from a former partner. In one text, Gardiner said “F*** that c***” when referring to a constituent who asked for help regarding a landscaping issue in the ward. He then proceeded to direct his aides not to help the woman, and to come to him first before moving forward with anything.

Other texts include him calling a constituent a “B****” and a city hall worker a “dumb b****,” among other things. Gardiner even went as far as using profane language to describe another Chicago alderman, Tom Tunney.

Mayor Lori Lightfoot has also weighed in, calling for the office of the Inspector General to investigate Gardiner.

Members of the Northwest Chicago community, all too familiar with the behavior of Gardiner, assembled September 13 outside Gardiner’s office calling for his resignation.

With just over 100 present, the protesters started the evening off with chants like “Show some spine, just resign!” and “Hey hey! Ho ho! Jim Gardiner has got to go!”

The protest, organized by United Northwest Side, was also attended by a variety of other groups, including Justice For Anthony Alvarez. Gardiner has in the past posed with Alvarez’s killer, Chicago cop Evan Solano, and infamously organized a counterprotest to a Justice for Anthony Alvarez protest with fascist Chicago Fraternal Order of Police president John Catanzara. The anti-Alvarez counterprotesters were ultimately outnumbered, but the disgraceful actions of Jim Gardiner have not been forgotten.

Catherine Henchek, an organizer with Justice for Anthony Alvarez, told Liberation News: “We’ve seen that Jim Gardiner is someone that hangs out with killer cops. We’ve seen all the pictures of him hanging out with Evan Solano. We’re demanding Solano be fired and that Jim Gardiner resign. We’ve seen his [Gardiner] tweets, we’ve seen his emails, that sort of bullying is not acceptable for an official, neither is that sort of misogyny or homophobia.”

Ash Srivistava of United Northwest Side addressed the crowd, “We deserve a true representative of the people. We deserve someone much better than Jim Gardiner. That is why today, I, along with many other Chicagoans, demand that Jim Gardiner resign immediately.” This demand was met with thunderous applause. Notably, no counterprotesters met the crowd.

During the events of the evening, the Chicago Tribune reported that the FBI had launched a probe into Jim Gardiner for abuse of power. WTTW also reported that Jim Gardiner may be probed over taking bribes and using “pay to play” tactics so constituents and businesses can get help. Jim Gardiner already faces two federal civil suits, notably for the cell phone incident mentioned earlier.

On September 14, Gardiner was notably late to a City Hall meeting, and ironically showed up during a Zoom call where a constituent was demanding that he resign. Since the leaked texts, Gardiner has apologized for the sending of the texts, but not to the people the texts were meant for. Dozens of city officials have officially condemned Gardiner’s behavior, with 13 demanding a formal investigation.