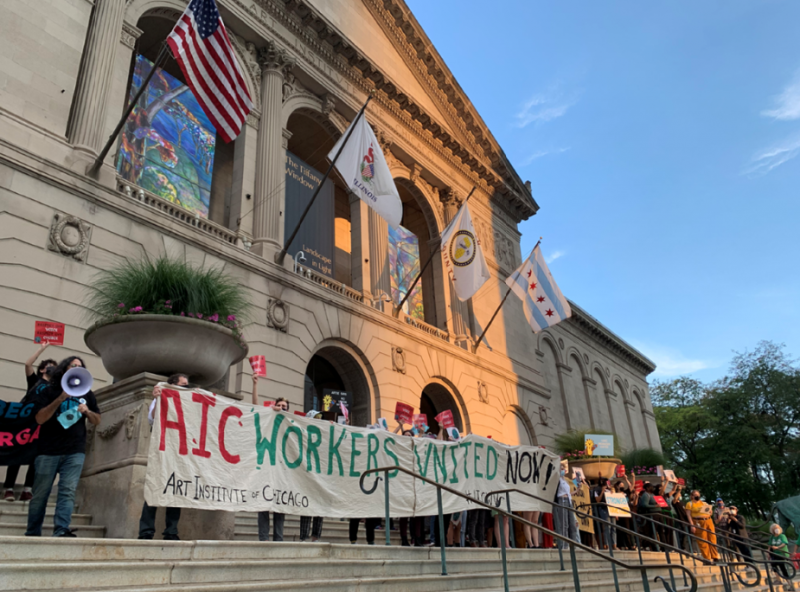 Workers at Art Institute of Chicago fight for a better work life.
(Fight Back! News/staff)

In a public letter released on August 4, the AICWU demanded: “A voice in the decisions that affect us; better wages and benefits; transparency around compensation and advancement, and equal access to these opportunities regardless of class, disability, gender, or race; safe working conditions, reasonable hours, and adequate resources to perform our jobs; [and] a workplace free of harassment and microaggression.”

Organizing began over a year ago at the Art Institute, coinciding with a nationwide movement of unionizing cultural workers. Museums like the Los Angeles Museum of Contemporary Art, the Walker Art Center in Minneapolis and the Whitney Museum in New York, among others, all had unions recognized in the past two years.

Stoking the fire was a crowdsourced spreadsheet, “Arts + All Museums Salary Transparency 2019,” where museum workers from around the country could anonymously detail their role, the institution they worked for, their salary, and their level of education. The precarious financial situation of so many museum workers, in contrast to the extreme salaries of their upper management, threw into relief just how bad the disparity had grown between the wealth of these institutions and the pay of the workers.

Armed with this knowledge, and upset by their own working conditions, dissatisfaction brewed at the Art Institute. When the pandemic hit and the museum and school shut their doors and laid off workers, grievances were catalyzed into union action.

Michael Zapata, academic adviser at SAIC, led the crowd through a series of chants: “Get up! Get down! Chicago is a union town!” before handing the mic off to speakers from both institutions, as well as organizers from the American Federation of State, County, and Municipal Employees (AFSCME). AFSCME Council 31 would represent AICWU.

Kevin Whitenier, an access services librarian at the Art Institute, spoke at the rally. “In January I was among those furloughed by the administration for three months. In the library we were told we were not essential to the functioning of the museum,” Whitenier told the crowd, “Only to be told in April that we were suddenly essential four days per week. We were asked to come back to campus before vaccines had even been [made] widely available and accommodations were at best uneven.”

This, while the Art Institute had an endowment of $1.14 billion, and SAIC was running a 15% profit margin as well as receiving $281.5 million from the emergency CARES Act.

Another speaker at the rally, Robyn Besana, a disability specialist at SAIC, spoke about her role on the Anti-Racism Committee (ARC). She recounted her experience of sending recommendations to the administration, only to have them diluted and stripped of their rhetorical power before being shared school wide. “Isn’t it strange,” Besana recounted one of her co-workers pointing out, “that as an anti-racism committee ‘anti-racism’ the word only appeared a couple of times in the recommendation. The word ‘diversity’ showed up a lot more often.”

Besana continued, “Diversity, while still important, is nowhere near the same as dismantling the systematic causes that uphold racism. Diversity looks like hiring workers of color; anti-racism looks like identifying why retention of these workers at our school is so low.”

After the speakers wrapped up, the crowd began chanting and marching from the park to the iconic steps of the Art Institute. Framed by the famous lion statues, workers and supporters cheered and reveled in honks of support by passing Chicago traffic as Zapata closed the rally.