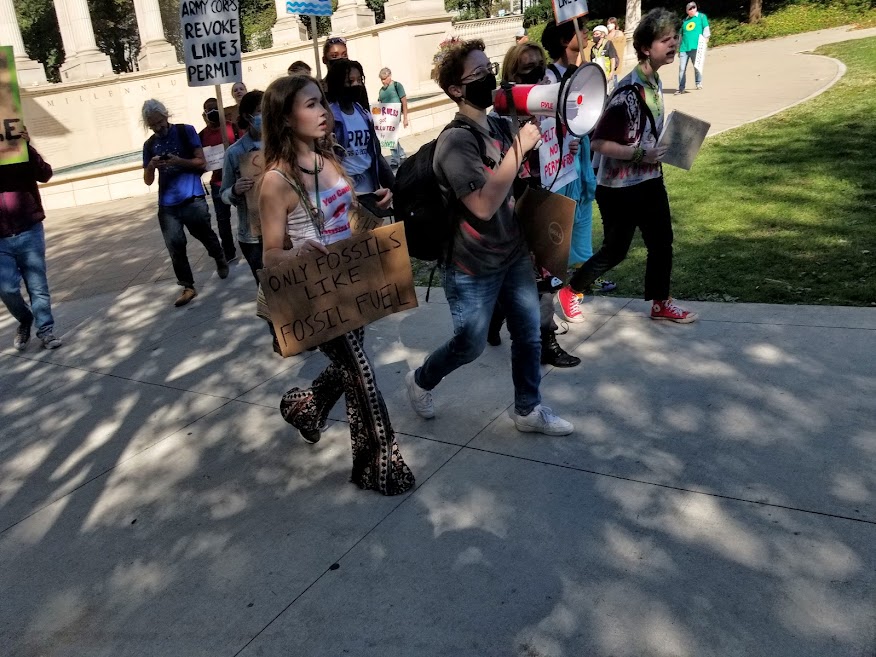 Chicago—A small but determined group marched near Millennium Park (the cops would not let us into the park itself) as part of the international climate strike on Sept. 24. We were demanding climate justice, not separated from rapid, comprehensive action to stem climate change. Many chants called for stopping the Line 3 pipeline that activists led by Indigenous people are resisting in Minnesota. (See “Native Americans challenge Line 3,” July-Aug. 2021 N&L.) Chants also demanded climate justice and an end to the extraction and burning of fossil fuels, as well as: “One solution: no pollution! One solution: revolution!”

The strike was called by Fridays for Future under the rubric of #UprootTheSystem. Participants came out in more than 1,500 locations around the world—for example, young people marched in Freetown, Liberia; thousands gathered in Buenos Aires, Argentina; 100,000 in Berlin, Germany. This was the first non-virtual global climate strike since the pandemic started and social restrictions hindered protest actions. Those restrictions still prevail in many parts of the world—especially in countries discriminated against in vaccine apartheid, like most or all of Africa—so that we have not yet returned to the level of September 2019, when 4 million people participated.

However, the urgency of the situation has only intensified, from the rapid succession of weather disasters to the mounting scientific warnings, and the radicalism of the movement has intensified as well. The message of the call by Fridays for Future for the Sept. 24 climate strike stressed the need for drastic emissions cuts by the Global North, combined with reparations from the colonizers to the oppressed countries, areas and people, together with an equitable “genuinely global recovery from COVID-19” as well as:

“Stop the violence and criminalization against indigenous peoples, small farmers, small fisherfolk, and other environmental and land defenders. Support the work they do.  Respect and listen to our defenders.”

Politicians are trying to deceive the world with fake promises and half-measures full of loopholes, but the young people in this movement are not falling for it. “We must remember that our liberations are tied together,” they declare. They will be satisfied by nothing less than the radical social transformation whose necessity has been demonstrated by both science and history.

Here is the bullet-point version:

Our message to world leaders:

Our message to everyone: