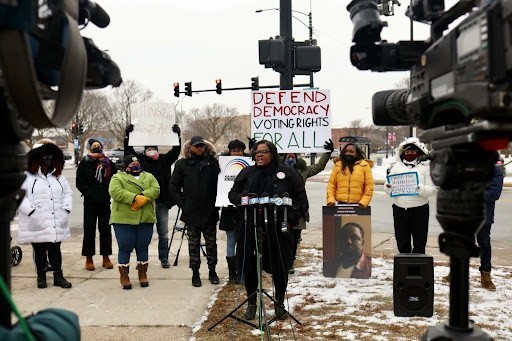 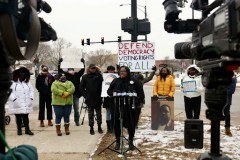 Chicago, IL – On Martin Luther King Jr Day, January 17, the family of Dr. King led a march for voting rights across Frederick Douglass bridge in Washington DC. At the same time, a coalition of over a dozen community organizations and labor unions organized a caravan of over 100 cars up King Drive in Chicago for the same purpose. Activists in both cities and across the country have voiced their support of the Freedom to Vote Act and the John Lewis Voting Rights Advancement (JLVRA) Act.

In a statement on the National Alliance Against Racist and Political Repression website, NAARPR executive director Frank Chapman said, “Getting these bills passed means stopping the reactionary Republican Party from suppressing the right to vote, from blatantly denying masses of Black, brown, and poor people the right to vote. This is a racist, Republican-engineered war against our people. And unless we stand up and fight back it will be a one-sided war.”

Republican lawmakers have passed 34 laws restricting voting rights in 19 states in 2021 alone. These laws are a part of a decades-long push by the right wing to erase the gains made by Black people and other oppressed nationalities in the U.S. during the Civil Rights Movement of the 1950s and 1960s.

With wind whipping their signs and the windchill at ten degrees, a press conference was held before the caravan. Bishop Travis Grant, executive director of Operation Rainbow PUSH, said the Republican lawmakers “are in the spirit of Bull Connor and George Wallace, blocking the [JLVRA] Act, the George Floyd Justice Act, and the Freedom to Vote Act.” Bishop Grant also pointed to the regressive policies of these same lawmakers regarding health care, education and labor unions. Erica Bland, executive vice president of SEIU Healthcare Illinois, linked the ongoing struggle for voting rights to the democratic struggles Black people fought during Reconstruction: “We are here to say that labor is with the movement. One day longer, one day stronger.”

Bland and other speakers called out Democrat senators as well, particularly Joe Manchin and Krysten Sinema, as being the “white moderate stumbling blocks” Dr. King referred to in his Letter From a Birmingham Jail. Dr. Lashawn Lattrice with Make Noize for Change said, “we are holding these politicians accountable by forming coalitions across the country to say that we will not stand for voter suppression.”

Reverend Jamie Fluker with Southsiders Organized for Unity and Liberation (SOUL) also connected the modern struggle for voting rights to the legacy of Dr. King, as well as other civil rights icons such as Fannie Lou Hamer. “Today we invoke their spiritual courage and their persistent thirst for justice,” Reverend Fluker said.

The final speaker was Bertha Escamilla, mother of torture survivor Nick Escamilla and member of the MAMAS, an organization of mothers and other family members fighting to free torture survivors and other wrongfully convicted people. Escamilla spoke on the link between struggling for voting rights and the fight against the criminal legal system that incarcerated her son.

Other organizations that endorsed at the rally were NAACP, BLM Chicago, the Arab American Action Network, the US Palestinian Community Network, the National Alliance for Filipino Concerns, Justice for Nick, Indivisible Chicago, and Indivisible Chicago South Side. This coalition is one of many across the country organizing together with chapters of NAARPR to fight against systemic racism.