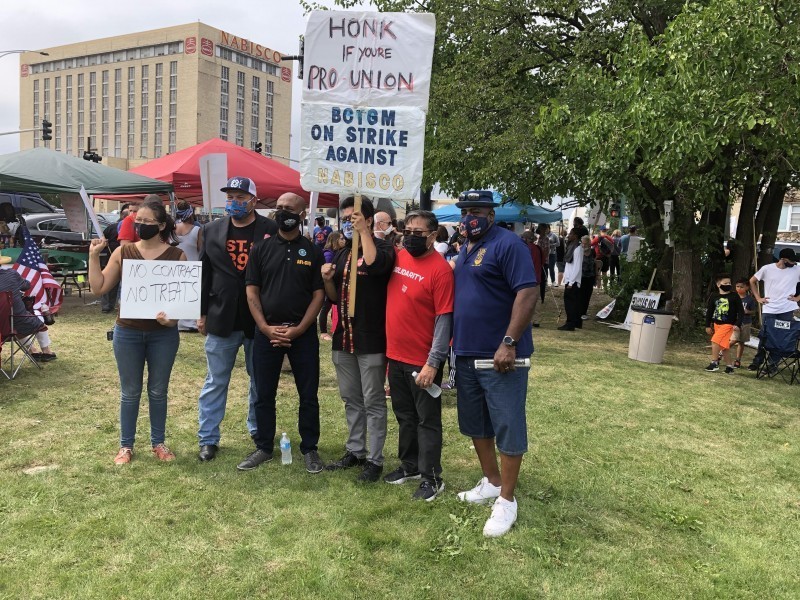 Chicago, IL – Several hundred striking workers and supporters rallied September 4 at the Nabisco plant on Chicago’s South Side. Strikers marched through around the plant, and even staged a sit-down action on company property.

Workers chanted, “No justice, no peace. No contract, no cookies!”

Don Woods, president of the Bakery, Confectionery, Tobacco Workers and Grain Millers (BCTWG) union Local 1, states, “The strike was caused when Nabisco’s parent company, Mondelez, proposed 12-hour shifts instead of eight hours, with no overtime unless you work a sixth or seventh day in a week. These changes are going to cost many of our members $30 or $40,000 a year in lost overtime. The employer also proposes creating a two-tier system for new hires where they would be responsible for a higher portion of their health care costs.”

Woods continued, “In 2015, the company moved 300 jobs to Mexico so they could exploit those workers for lower wages. The CEO made $16 million last year, but he wants to make more profits from us. We won’t accept more concessions.” Nabisco’s parent company Mondalez made $3.5 billion in profit last year.

Workers complained that the change to the workday, work week, and overtime rules the company demands in bargaining would also destroy family life for the over 300 workers still in the Chicago plant. Workers in the bakery deal with extreme heat, which one worker compared to being cooked in a microwave oven.