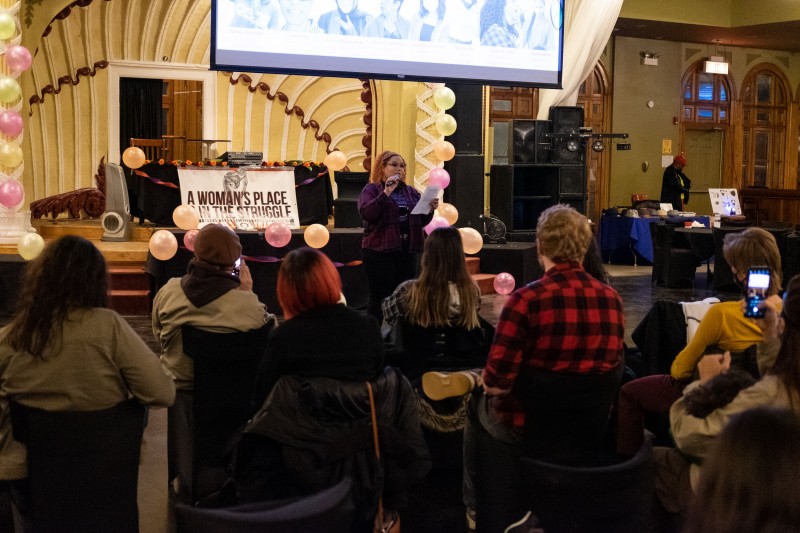 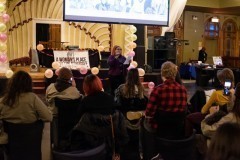 Chicago, IL – Freedom Road Socialist Organization-Chicago held an annual International Women’s Day celebration at the Grand Ballroom in the Woodlawn community on the South Side of Chicago. 40 people attended, some from Woodlawn, and others from around the city, including a delegation of Brown Berets, Chicano and Chicana activists, from Little Village. The venue is in the same building as the offices of the Chicago Alliance Against Racist and Political Repression.

The program was filled with speakers and poets. Organizations represented included the Malaya movement of the Philippines, fighting against the fascist attacks by the Duterte regime; a livestream talk by a member of Students for a Democratic Society in Tallahassee, Florida, about their militant opposition to the attacks on abortion rights there; the US Palestinian Community Network on the resistance of women to the occupation of Palestine; and Crista Noel of the Women’s All Points Bulletin in Chicago, working to stop Chicago police crimes against women.

Melanie Navarro, a high school student from Little Village who helped lead a student walk-out for safety in the face of the spike in COVID infections in January, shared her poetry. There was even a video greeting from a special guest, Connie Ledesma of the International Women’s Alliance. Ledesma was also a leader in the National Democratic Front of the Philippines.

Jazmine Salas of FRSO emceed the event. Salas said, “IWD is more than a celebration of women who are leading struggles across the world. It’s a time to reaffirm our commitment to ending gender-based oppression, to fight for the rights of women.”

fuckyeahmarxismleninism:Celebration of the first anniversary of the Bolshevik Revolution, November…

Cuba: Nothing Will Tarnish Our Celebration

The State’s Celebration of Lies and Punishment of Truth