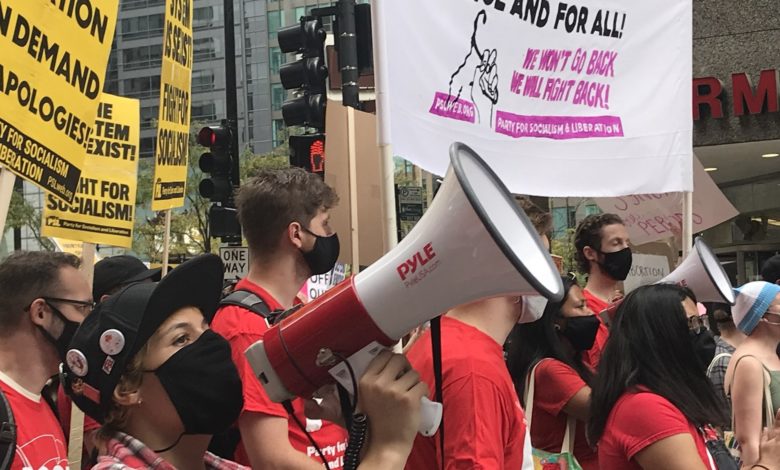 On Oct. 2, approximately 1,500 people gathered in Chicago’s downtown to protest attacks on reproductive justice. This action was one of more than 600 marches called by the Women’s March to defend access to abortion in reaction to Texas’ Senate Bill 8 which severely limits a person’s ability to have an abortion in the state.

While many consider Illinois’ abortion laws liberal, the wave of attacks on abortion rights has had an impart here. A Chicago abortion clinic escort told Liberation News that that they escort many clients from Indiana, where there are many more restrictions, and have seen a rise in out-of-state clients since SB8 was put in place. Additionally, increased attacks on access to abortion has been seen in Chicago, as right-wingers are emboldened by SB8. Earlier this summer, abortion providers, including a Planned Parenthood clinic in Chicago’s Rogers Park neighborhood, were vandalized.

At the rally preceding the march, a small group of anti-choice supporters attempted to counter-protest the action. Their speeches were quickly drowned out by chants led by Party for Socialism and Liberation members. Soon a sizeable crowd began to shout down the bigots to the beat of drums and cowbells, with chants including “Pro-life that’s a lie, you don’t care if women die!” and “When abortion rights are under attack, what do we do? Stand up, fight back!”

The protest drew out many parents, families with children and pregnant mothers. Emily Balsamo, a woman well into her third trimester said, “As a woman due to give birth in just a few days, I felt it is my obligation to come out to advocate for reproductive justice today. Reproductive choice shouldn’t be a privilege but a right. I acknowledge how fortunate I am in having been able to choose to stay pregnant. I understand now more than ever how inhumane the act of forcing pregnancy on women is … What is happening in Texas is not a matter of defending the ‘sanctity of life’ but is only about exerting control over women’s lives and bodies, and it’s got to stop.”

Protesters uplifted the class implications of abortion access by chanting “Abortion is a human right, not just for the rich and white!” Irene Martinez, a mother and former physician in Argentina, told Liberation News that she came out to the protest because, “This is a terrible decision … that affects low-income women especially in Texas. There are Latinas all over. In the past people with money, could have access to private doctors when it [abortion] was not legal and had a safe way to do it. Back in my country, I saw many women, who didn’t have options, self-provoked the abortions and died of sepsis… This is a public health issue also because it prevents a lot of unnecessary death and unsafe situations… Every woman should have the choice to do to it [abortion] for free and safe!”

Many protesters specifically came out to demand that the Democratic Party-controlled government act to protect reproductive rights and fully legalize abortion. The earlier mentioned clinic escort said, “Abortion rights are human rights… We need this legislation [the Women’s Health Protection Act, which would protect the right to abortion] passed immediately!”

Martinez also expressed hope that the struggle in the streets would force “those who can re-write the law” to legalize free abortions.

Protester and pregnant mother, Ana Santoyo told Liberation News, “As SB8 went into effect Sept. 1, we have to remember that it was passed in May of earlier this year, and Democrats who have control of the House, Senate and White House had plenty of time to fight against it from going into effect. The need for a militant movement independent of the Democrats is the call that I am out here fighting for, because their lack of action will lead to the death of women in Texas and everywhere that is using SB8 as a blueprint for abortion bans.”

The crowd then marched throughout the streets of downtown Chicago passionately chanting. Again at the end of the march, the same anti-choice supporters were awaiting the return of the marchers to continue their counter-protest. Around 40 protesters quickly and loudly responded with chants until the bigots left Daley Plaza.