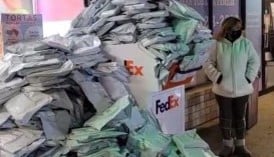 This article was originally published in RedsinEd.org.

As part of what is becoming a familiar New Year’s tradition, the Chicago Teachers Union and the Chicago Public Schools have been recently engaging in tense negotiations over the status of CPS’ school reopening plans. The union is demanding an “occupational pause” if the district can not provide an adequate safety plan as teachers and students return to buildings. School districts across the country, including Washington D.C., Detroit, Milwaukee and Cleveland, are opting to return students remotely rather than risk the uncontained spread of the Omicron variant in schools.

Before the holiday break, CPS sent students living in high risk areas home with an in-home COVID test. This test was to be completed and turned in prior to students’ return to school. If students scored a positive on the in-home test, they would remain quarantined at home and resume classes remotely.

The administration and processing of the in-home tests has been a debacle. Families who lost or never received a test lined up for blocks around CPS headquarters last week to receive one. FedExs, Walgreens and Public Libraries filled up with at-home tests literally being stacked into a mountain in some locations. The district’s own numbers tell the story: out of 150,000 COVID-19 tests sent to families, only 35,223, around 23%, were returned before Jan. 3. An incredible 24,836 tests, over 70% of the total, were found to be invalid. Of the remaining tests, 18% of those results were positive.

Omicron is much more infectious than any other discovered variant of COVID-19. It is infecting children at a higher rate and even those who have booster shots are being affected. Having a COVID booster dramatically decreases the chances of a serious infection requiring hospitalization. Chicago schools are already severely understaffed, however, and as more staff members catch COVID and quarantine, it will become harder for schools to perform their basic functions, including keeping a clean building, feeding and educating students.

The CTU met on Thursday with representatives of the CPS bargaining team to resubmit a proposal asking CPS to abide by their own metrics and close schools. According to a Memorandum of Agreement arrived at in February 2021, CPS will close schools if there is an infection rate increase of seven days in a row, the infection rate is 15% higher at the end of each day than the average of one week before, and the infection rate is over 10% on the seventh day. Even though the previous MoA expired in August, no new agreement between the union and district has been reached. Labor law states that in the conditions where no agreement is reached, the agreement which was last standing should stand. The infection rate in Chicago has skyrocketed. December 31’s infection rate stood at 17.9%, higher than the 8.9% average of the previous week. Clearly under the prior MoA, schools must shift to remote learning.

CTU is not waiting for the mayor’s office to act. On Sunday, Jan. 2, the union held a tele-townhall where members aired their feelings of disgust and rage against the farcical response by the district. On Monday night, Union members voted on whether or not to enforce a remote-only work action on Wednesday. CPS has not responded as to whether they will lock teachers out of their CPS accounts and prevent them from teaching. The house of delegates meeting on Tuesday night will be the decisive vote in determining whether teachers in effect walk off the job to protect the lives of their families and students. A walkout now would send a strong message to unions across the country that the time is now to fight back against the assault on the rights of workers to safe working conditions.

The union has also called on members to strengthen safety action committees at their schools. The union has prepared a package of resources that provides guidelines for how members can get active in the Safety Action Committee, press administration to provide proper PPE to students and teachers, and provide a clear plan indicating how schools will be staffed should there be a COVID outbreak among staff.

CPS has made clear what it’s priorities are. Only the actions of organized education workers will protect the health and wellbeing of families and workers during the pandemic.