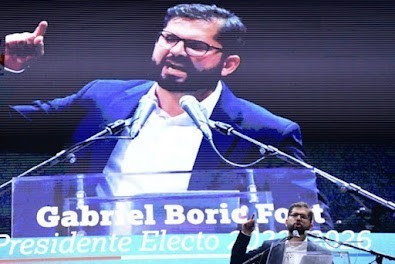 Gabriel Boric, the candidate of the social democratic coalition “Apruebo Dignidad”, which is also supported by the Communist Party, prevailed on Sunday’s second round of the presidential elections thus becoming Chile’s youngest-ever president.

According to the final results, Gabriel Boric won 56 percent of the votes, compared with 44 percent for the candidate of the neoliberal coalition “Vamos por Chile”, Jose Antonio Kast, an ultra-conservative lawyer who claims to be a political successor of fascist dictator Augusto Pinochet.

In the first round, held on November 21st, Kast had received 27.9 percent of the vote with Boric coming second with 25.8 percent.

Turnout for the second round rose by 1.2 million from the first round, and from 47.3% in the first round to 55.6%, the highest level for any Chilean election since voting ceased to be compulsory in 2012.

Gabriel Boric, a 35 years-old former student movement leader, promised to bring about “a welfare state so that everyone has the same rights no matter how much money they have in their wallet.”

A social democrat who stands in favor of the co-operation between the public and private sector, Boric pledged to “expand social rights” in Chile, but to do so with “fiscal responsibility.”

The new president of Chile, born on 11 February 1986 in Punta Arenas, was one of the leading figures of the 2011–2013 Chilean student protests and was elected two times to the Chamber of Deputies representing the Magallanes and Antarctic district, first as an independent candidate in 2013 and then in 2017 as part of the Broad Front, a leftist coalition he created with several other parties.