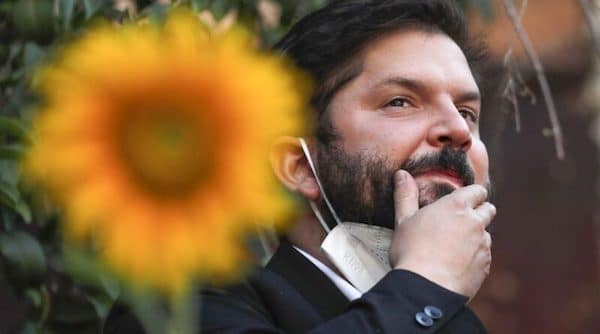 Gabriel Boric, president-elect of Chile, considers that the leftist governments headed by President Nicolás Maduro in Venezuela and Daniel Ortega in Nicaragua “have failed.” According to him, the main indication of the Venezuelan government’s failure is “the six million Venezuelans in diaspora;” however, he failed to mention that many in the Venezuelan “diaspora” in South America were encouraged to migrate—with false promises—by right-wing presidents in the region, including the outgoing President of Chile, Sebastián Piñera, and others were forced to leave their country due to the economic crisis caused by the illegal sanctions imposed by the U.S. and European countries.

Boric reiterated his contempt for Venezuela and Nicaragua in an interview with BBC Mundo published this Friday, January 21, in which he was asked if he identified with any of the “leftist rulers” of the region. He responded that he understood that the question “was closely related to Venezuela and Nicaragua.” In the case of Nicaragua, he vaguely commented that he could not “find anything [of worth] there.”

In contrast, he stressed that it gave him “a lot of hope” to be able to work “side by side with Luis Arce in Bolivia; with Lula if he wins the election in Brazil; the hope of Gustavo Petro if it comes to fruition in Colombia,” because this would make it possible to build “a tremendously interesting axis.”

Former president of Ecuador, Rafael Correa, questioned Boric’s position, reminding him of the economic blockade that the United States maintains against Venezuela, preventing Venezuela from selling oil, the country’s main export product, along with other criminal measures with the help of the European Union and Canada.

“How many Chileans would be in the diaspora if Chile was prevented from selling copper?” he questioned. According to the former president of Ecuador, what Boric said about Venezuela, without taking into account the U.S.-led suffocation of the Venezuelan economy,

is like finding a drowned man chained and claiming that he died because he did not know how to swim.

This Friday Boric also announced his cabinet in a move that many analysts associate with the U.S. Democratic Party style of identity politics, as the fact that 14 out of the 24 new ministers to take office next March will be women has been highlighted, without much attention to the appointment of hardcore pro-market / neoliberal figures in key economy-related ministries.

Chile’s new government is looking to be more of the same: Millennial socdem President-elect Gabriel Boric selected as his foreign minister a neoliberal imperialist who worked for the US-controlled OAS and supported the right-wing coup attempt in Nicaraguahttps://t.co/Q4Vom9gMNp

Moreover, the appointment of Antonia Urrejola as minister for foreign affairs has raised eyebrows among many. Renowned U.S. journalist Benjamin Norton reacted,

Chile’s new government is looking to be more of the same: Millennial socdem President-elect Gabriel Boric selected as his foreign minister a neoliberal imperialist who worked for the U.S.-controlled OAS and supported the right-wing coup attempt in Nicaragua.

Urrejola had worked tirelessly, as the head of the Interamerican Court of Human Rights (CIDH), with Luis Almagro’s Organization of American States (OAS), in backing the failed “color revolution” launched in 2018 against President Daniel Ortega and the Nicaraguan people. It is also worth remembering that she had been the head of the team of former Secretary General of the OAS, José Miguel Insulza, during whose tenure (2005-2015) the Honduran government headed by Manuel Zelaya was overthrown by the U.S. in 2009, and the year before, there was a failed coup attempt against Evo Morales in Bolivia. In both cases the OAS did nothing to stop the coups, and Urrejola never uttered a word against them. Similarly, she has never taken a stand against the grave human rights violations committed by the government of Iván Duque in Colombia and that of Piñera in her own country; yet she has constantly criticized the government of Nicolás Maduro in Venezuela, branding it a “regime.”

Another not very promising appointment—although expected—was that of the “communist star” Camila Vallejo, who too has made very non-Marxist comments about Chavismo and the Bolivarian Revolution in Venezuela. Vallejo was appointed the secretary general of the cabinet, equivalent to government spokeperson.

Her most recent statements against Venezuela were posted in a tweet from September 2020. She wrote: “I said it before and I reaffirm it: the UN reports on Venezuela have been lapidary. Human rights violations are intolerable and cannot go unpunished in Venezuela or Chile. I hope that Venezuelans can decide their future without U.S. military intervention.” She made this statement in reference to a very controversial human rights report presented by an U.S./OAS organized committee with clear political motivations. A few days later, the Communist Party of Chile made statements in support of Chavismo and distanced itself from Vallejo’s comments.