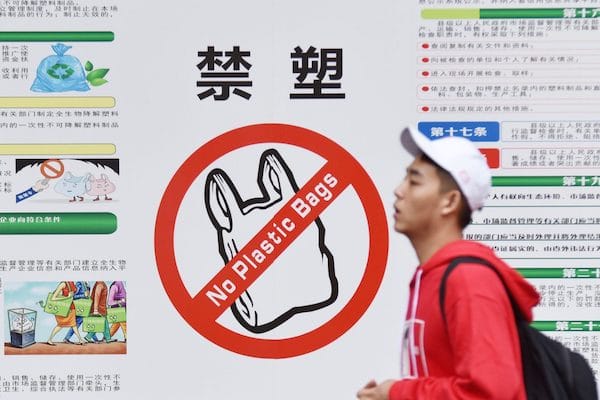 China’s “toughest ever” drive to reduce single-use plastics has been underway for two years.

In January 2020, the country announced bans or restrictions on the production or sale of products including single-use plastic bags and cutlery, with an ambitious timetable for their removal from the market. Some single-use products were to be replaced with alternatives in less than a year.

The sudden ban on large quantities of non-biodegradable single-use plastic products triggered a boom in the production of alternatives, particularly biodegradable plastics. Weng Yunxuan, a professor of polymer chemistry at Beijing Technology and Business University, has estimated that by 2025 China’s production of two main types of biodegradable plastic, PBAT and PLA, will have hit 7 million and 1 million tonnes respectively, up from 300,000 and 100,000 tonnes in 2020. That will represent two-thirds of global output.

But some months ago, when the National Development and Reform Commission and Ministry of Ecology and Environment published plans for tackling plastic pollution in 2021–25, there was a notable shortage of content on biodegradable plastics, with no requirement to increase their use. On the contrary: the plans called for more research into the impact and applicability of the materials, and warned against blindly expanding production.

What caused the sudden turnaround?

The thinking behind the 2020 restrictions was that more environmentally friendly products would replace single-use plastics, with a focus on reusable, recyclable and degradable options. Industry assumed the government would be encouraging the use of degradable versions of plastic bags and of mulching films used to protect fields, and so upped production.

But what exactly are degradable plastics? In China, the definitions and classifications found in standards and guidelines are unclear.

The current applicable national standard, 2006’s GB/T20197, identifies four types of degradable plastic: biodegradable, compostable (a subset of biodegradable), light degradable and thermal-oxidative degradable. The latter two categories involve adding substances to non-degradable plastics that cause them to degrade into microscopic pieces. But those microplastics retain the same chemical properties and cannot be absorbed by the environment. And as they can’t be seen by the naked eye, they remain in the environment, causing damage. 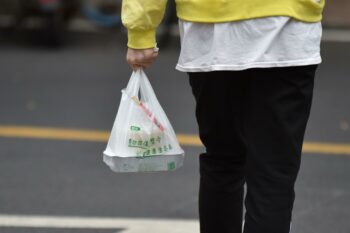 A biodegradable plastic takeaway bag in Hainan. There is no binding national standard for “biodegradable” plastics in China, so their quality varies widely; two types can even degrade into microplastics. (Photo: Lu Junming/Alamy)

There has been nothing new since 2006 on light degradable and thermal-oxidative degradable plastics but since 2010 the government has issued a range of standards for biodegradable plastics, covering mulching films, plastic bags, delivery packaging and disposable cutlery. But all are recommendations, rather than binding.

In 2020, the China National Light Industry Council published guidance on categorising and labelling degradable plastics, with a new definition and a requirement that a material must have a degradability of 90% or more to be labelled “biodegradable”. But that did not have the binding force of a national standard.

Unclear definitions and standards have led to a messy market. Wang Zhanjie, deputy chair and secretary of the China Plastic Processing Industry Association, said in an interview with China News Week that the lack of a single standard for production has led to uneven product quality.

There are technical questions over some new biodegradable products–they say they’re biodegradable, but ultimately they don’t meet the necessary standards.

A new national standard for the definition, classification, labelling and degradability of degradable plastics is in the works. A consultation draft was published in November 2020, but nothing has yet come into force. When it does, it will replace the 2006 standard. 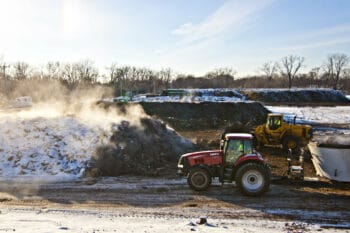 The confusion over standards is only one of the issues with degradable plastics.

Even certified degradable plastics only break down under certain conditions, and the speed at which they do can depend on oxygen levels, humidity, temperature and the presence of certain microorganisms.

Zhang Miao, director of Shanghai Ecocycle Circular Economy Research Center, told China Dialogue that PLA will only break down under the temperature and humidity found in industrial composting facilities. No biodegrading occurs in cooler conditions. Meanwhile, PBAT barely breaks down in water–less than 2% over the course of a year, tests have found. That means it is no better for the environment than ordinary plastics if it ends up in rivers or the ocean. 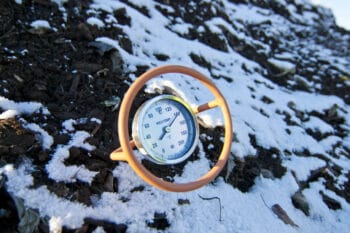 Some “degradable” plastics, such as PLA, must be sent to large composting facilities with controlled environments in order to break down. (Photo: Minnesota Pollution Control Agency, CC BY-NC 2.0)

Eric Liu, campaigner with Greenpeace East Asia, says that lab tests can’t be used as justification for wider use of degradable plastics–studies need to be done to see how these materials behave in the relevant environment. “It’s possible that the risks presented by degradable plastics to individual organisms, biodiversity and ecosystems are actually the same as those arising from other plastics,” he said.

So we need to see performance in various situations before expanding use.

Two viable biological routes to genuinely breaking down degradable plastics are composting and anaerobic digestion. But studies have found degradable plastics are currently used primarily at home, and most domestic waste goes either to incinerators or landfill, according to one expert at a workshop on the plastic pollution policies in the 14th Five Year Plan (for 2021–2025), held by Tianjin Lingmeng Charity Development Centre. Most degradable plastics, therefore, are not handled optimally.

Would better waste management ensure these plastics end up being broken down in composting facilities?

Theoretically, yes. But the range of different types of degradable plastics, and management and operational costs, make it next to impossible in practice.

Eric Liu walked us through the process using as an example plastic bags that store domestic food waste:

From sorting in the home, to placement into kitchen waste bins, to separate transportation, to delivery at a composting facility for final disposal–we need to keep non-degradable plastic bags, or plastic bags not certified as degradable, out of the system. Otherwise, all the composting facility can do is remove all bags to ensure they can keep running normally, and if all bags need to be removed, there’s no point in encouraging the use of biodegradable bags in the first place.

“Even if we imagine degradable bags all having clear markings, we’re not talking about a clean environment where you can easily check those marks. We can’t make sure that everyone throwing waste away knows to recognise a degradable bag, nor can we rely on volunteers to check all the bags in the bin,” he said.

In practical terms, if we don’t have very close supervision, the benefits of those degradable bags will be wasted. 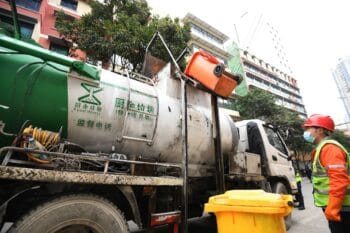 Collecting food waste in Guiyang, southwest China. Even though food waste is typically disposed of in compostable plastic bags, anything that looks like plastic is removed from the waste stream to avoid contamination, meaning very few degradable bags make it to composting facilities. (Photo: Cynthia Lee/Alamy)

In practice, waste disposal plants remove the plastic bags that kitchen waste has been put in, treating them as contaminants. Very few degradable plastic bags reach the composting stage. One expert familiar with China’s handling of plastic waste pointed out that composting facilities have equipment to remove contaminants to ensure plastics and other unwanted substances are kept out.

The above-mentioned expert also thinks that ensuring degradable bags used in households make it to the appropriate waste-handling facility would require a separate logistics system–which would be too costly.

“Actually, very little domestic waste escapes into the environment, and it’d be easier to set up systems for regular removal of what does. There’s no need to use degradable plastics in scenarios where escaped waste can be removed from the environment–traditional plastics will be fine.” He went on:

I think we should spend a bit less on degradable plastic use, but target that spending to areas where there is direct harm to the environment, such as mulching films, which are hard to recover.

Every year, China’s agricultural sector uses millions of tons of mulching films, most of which end up as “white pollution” in the environment. The latest report by Shanghai Ecocycle Circular Economy Research Center also considers mulching film as something where biodegradable plastics can truly make a difference.

In any case, as well as de-emphasising use of degradable plastics, the plan for tackling plastic pollution (2021-2025) has also designated government departments to explore ways to further reduce the use of plastics. Packaging for e-commerce and government procurement are two key areas for reducing plastic consumption in the coming five years.

No Cold War with China! No AUKUS Pact!

What Can the World Learn from China’s Approach to Covid-19?