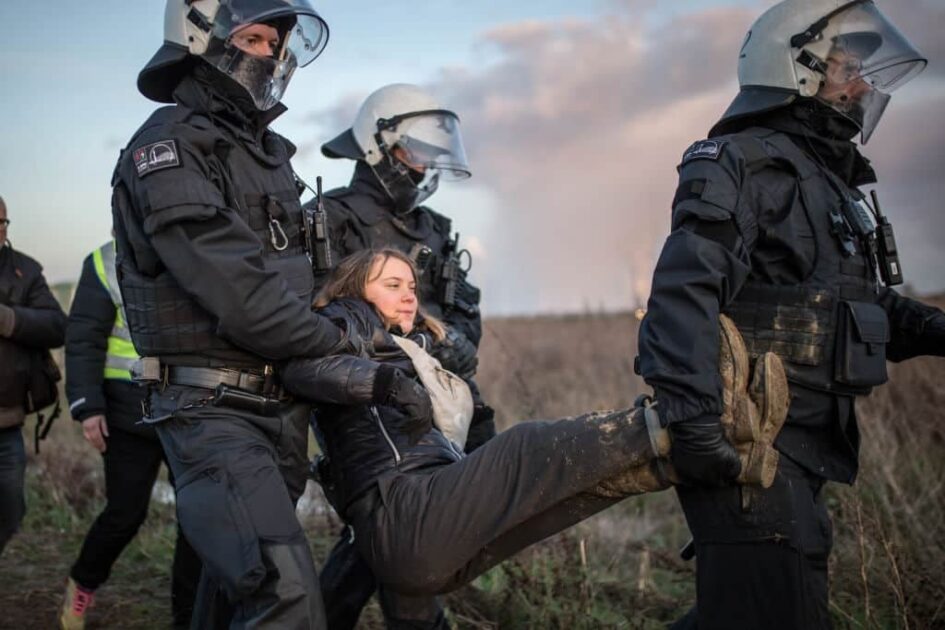 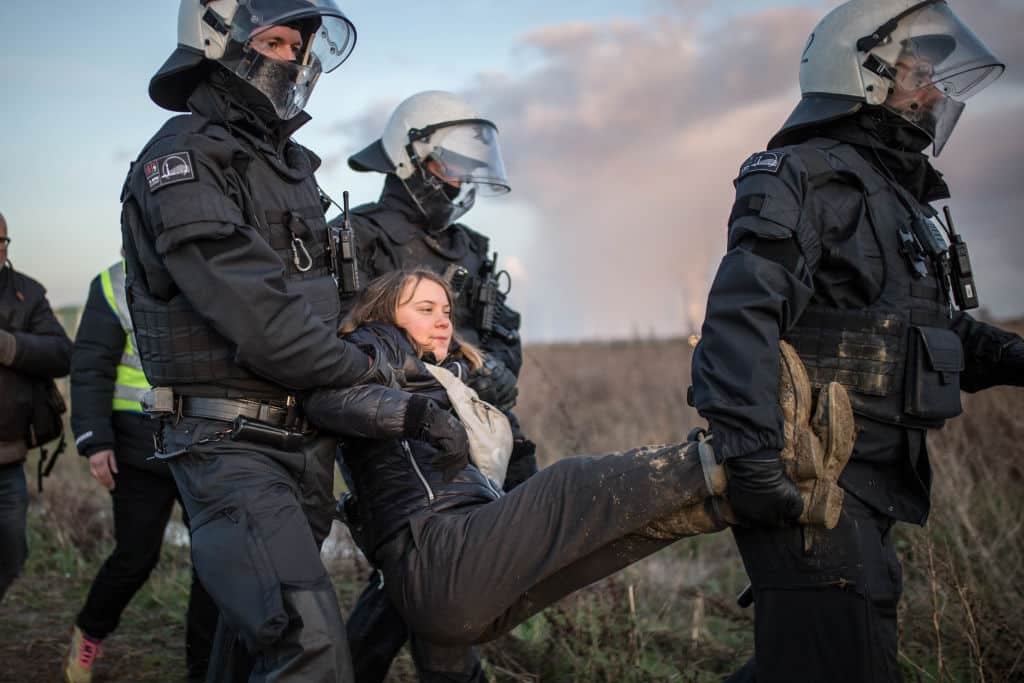 Above Photo: Police officers detain climate activist Greta Thunberg at a demonstration against the expansion of the Garzweiler coal mine near the village of Luetzerath on January 17, 2023 in Erkelenz, Germany. (Hesham Elsherif / Getty Images).

Greta Thunberg was one of the climate activists detained Tuesday during the struggle to protect the German village of Lützerath from being swallowed by an expanding coal mine, the second time this week that the Swedish climate campaigner has been detained during the protests.

Images revealed Tuesday showed German police physically carrying Thunberg away from the edge of part of the mine, as DW reported. Police told Reuters that she was being held with other demonstrators who would all be released later in the day.

“Greta Thunberg was part of a group of activists who rushed towards the ledge. However, she was then stopped and carried by us with this group out of the immediate danger area to establish their identity,” a spokesperson for the police of Aachen, Germany, told Reuters.

Activists began camping out in Lützerath in 2020 to prevent it from becoming absorbed by the Garzweiler opencast lignite coal mine, which is owned by the energy company RWE. Pressure to expand the mine increased after Russia’s invasion of Ukraine spiked energy prices and reduced gas supplies to Europe, and the German government struck a deal with the company to allow it to mine in the village if it would spare five other villages and phase out coal power in the country’s west by 2030 instead of 2038. The village is already abandoned by its former residents. However, environmentalists are still trying to stop the mine expansion, arguing that any expansion of fossil fuel exploitation is a betrayal of Germany’s climate goals. Indeed, the International Energy Agency has said that no new fossil fuel development can take place if world leaders are to limit global warming to 1.5 degrees Celsius above pre-industrial levels.

The standoff escalated on Wednesday when police began actively clearing the village of protestors who had camped out in buildings, trees and underground tunnels. Images shared on social media showed police slipping in the mud while activists hampered their progress.

Other videos shared by activists and journalists showed police using batons, pepper spray and water cannons, as DW reported further. Police said that nine activists have been hospitalized, according to POLITICO. However, organizers said that around 100 had been injured, according to DW. Thunberg called the response “outrageous.” Police, meanwhile, said that demonstrators set fire to barricades and that at least 70 officers sustained injuries.

Thunberg arrived at the village on Friday and addressed protesters on Saturday, as DW and CNN reported.

“The carbon is still in the ground,” she addressed the crowd, as CNN reported. “And as long as the carbon is in the ground, this struggle is not over. We need to stop the current destruction of our planet and sacrificing people to benefit the short-term economic growth and corporate greed.”

Thunberg’s first brush with the police came Sunday, when she was physically removed from the site of the protest along with others after refusing to leave, as POLITICO reported.

The entire village of Lützerath was cleared by Monday, when the last two holdouts were removed, according to DW. However, activists then returned to the site for another demonstration on Tuesday, Thunberg among them.

Police spokesperson Christof Hüls told CNN that Thunberg was detained for a second time because she, along with other protestors, overran a barricade and approached the edge of a coal pit on ground that had been made unstable by rain.

“We knew who she was, but she did not get VIP treatment,” Hüls told CNN. “She did not resist.”

Three police officers carried her away from the pit, and one held her by the arm later, Reuters reported.

Tuesday’s demonstration at the site itself was not the only protest against the mine expansion. Activists also blocked a train track transporting coal and occupied the RWE-operated Inden coal mine.

“Even if you destroy Lützerath, we will fight on: until you stop burning coal, extracting fracking gas and building autobahns,” Charly Dietz, a spokeswoman for the group Ende Gelände–which organized the Inden occupation and means “an end to mined areas” –said, as DW reported.

Why Greta Thunberg is cooler than you

Climate activists vow to continue anti-coal mine protests in Germany

Climate at the coal face: In search of a ‘just transition’

Far-right extremist kills one, injures others in Portland mass shooting