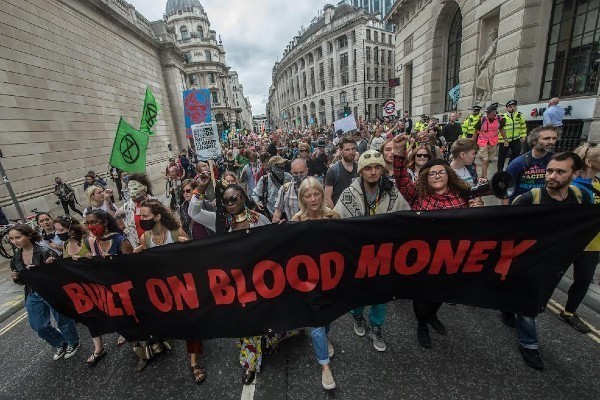 Extinction Rebellion (XR) took its Impossible Rebellion to the financial centre of Britain on Friday.

The protest began at the Bank of England and was clear in its message that the bosses’ drive to make profit is hurling us into climate catastrophe.

There was a strong focus on how the system that puts profit before the planet must be disrupted.

Although many on the march identified capitalism as the fault for the climate crisis, opinions differed over what the solution is.

NHS physiotherapist Alice who joined the protest at the Bank of England told Socialist Worker that capitalism needs to go, or the crisis won’t be avoided.

“The root of the issue for me is capitalism, it’s why the earth’s resources are being exploited,” she said.

“The system is driving us to ruin. There’s only a finite amount of resources so we can’t keep going on as we are.”

Amanda agreed that capitalism is not only at fault but also makes people believe their choices are to blame for the crisis.

“It’s money and profit that is at the root of the problem here,” she added.

After speeches outside the Bank of England protesters marched through the City of London chanting, “We don’t want your blood money” and “Sound the alarm”.

XR member Patrick told Socialist Worker he used to work in finance, so knows just how powerful banks and big corporations are.

He said that marching through the City was important so that those who work in the banks can see there are people prepared to stand up.

Patrick agreed that a different kind of system needs to be put in place eventually. But he added that winning reforms are presently the most important thing.

“We don’t have long to stop temperatures from rising above 1.5 degrees Celsius,” Patrick said. “The IPCC report says eight years. We have to force those in power to make change.

“I’m not sure we can build for a revolution alongside that.”

During this rebellion XR has focussed more on the issue of oppression. The action on Friday, like other actions in the week, made links between the climate struggle and the fight against racism.

Speakers pointed out the Banks of England’s bloody connections with the translate slave trade. And they called out the many law firms in the area who have defended fossil fuel companies against people in the global south.

As the protesters marched around the City of London, rebels also threw fake blood over the walls of multinational bank Standard Chartered as well as the city’s Guildhall.

Some activists have criticised the leadership of XR for planning events in secret and without the participation of those involved. The knowledge that the state is out to stifle XR can lead to its leaders restricting those who are “in the know” on a protest.

But this kind of organising runs the risk of alienating members, especially ones who live outside of London.

Rebel Amanda said, “I believe in bottom up action, that’s the only way we are going to do things.”

XR is right to use disruptive tactics to try and force action over the climate, but success will also mean building a mass movement.

That’s a challenge to XR, the broader climate movement and socialists who know that urgent climate action is desperately needed.

And more involvement by organised workers is needed. This initiative has to come from trade unions, trade unionists and activists.

Unfortunately, there has been precious little concrete support for climate action from many union leaders. That weakens the climate movement.

There needs to be much more workers’ action around Cop26 in Glasgow.

As the Impossible Rebellion is set to continue into next week, socialists must be there to flesh out arguments around system change that are developing within XR.