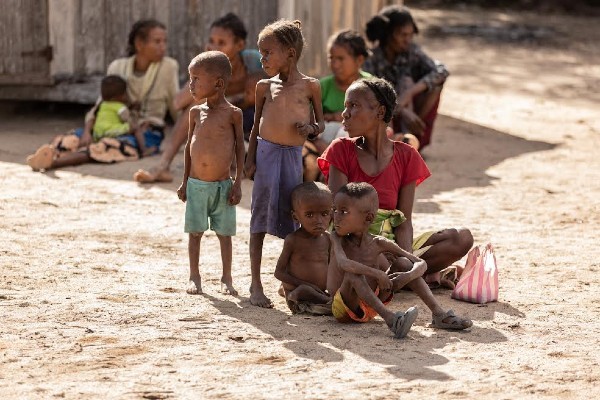 Marisoa with her three children suffering from malnutrition due to the lack of food (Pic: WFP/Tsiory Andriantsoarana)

Catastrophic climate change means floods, drought, fires—and famine. If you want to see what that means today, look at Madagascar, an island of nearly 30 million people off the coast of east Africa.

It is the site of what aid organisations are calling the first famine in modern history to be caused solely by climate change alone.

More than 1.1­million people in southern Madagascar are unable to feed themselves because the country is suffering from its most acute drought in four decades.

With the country’s regular pre-harvest “lean season” looming, many more are expected to face the threat of death through hunger in the coming months.

“These are famine ­conditions and they’re being driven by climate, not conflict,” said Shelley Thakral, senior communications specialist for the World Food Programme. “These people have done nothing to contribute to climate change.

They don’t burn fossil fuels and yet they are bearing the brunt of climate change.”

At the start of this year, 60percent of the annual agricultural harvests had already been destroyed in the south of Madagascar.

Over the past six years southern Madagascar has experienced five ­below‑­average rainy seasons. The past two consecutive below-average seasons have led to a severe reduction in the ­production of foods that are considered staples.

In addition to the drought itself, the changed climate saw an influx of once rare locusts and sandstorms that end up devastating crops.

Dry conditions combined with high levels of soil erosion and deforestation have ­transformed areas that once produced abundant crops into a wasteland. Unprecedented sandstorms have also covered cropland making it unusable.

Children in Madagascar are forced to eat locusts and cactus leaves as the ­climate-led famine worsens.

Over 40 percent of the ­population is younger than 15 years old, and children are even more vulnerable to the famine and disease sweeping parts of the country.

Climate change never hits everyone equally. Its effects are layered on to class ­inequality and other divisions.

So it is not wholly true to say that the present famine is caused entirely by climate change.

The Madagascan ruling class is centred predominantly on the politically and economically advantaged highlanders of the central plateau.

The upper strata of this group have imagined themselves as superior to those living on the coast and in the south.

The areas most hit by drought and famine have long been marginalised by the central government. They lack much of the basic infrastructure of schools, medical facilities and roads.

And that means they are hit harder by crop failures.

The way the world’s ruling classes have handled the Covid-19 pandemic has also seen steep rises in food prices. Instead of a planned response to make sure ­everyone had enough to eat, food is left to market mechanisms.

Lockdowns, hoarding and transport disruption then enable producers—often giant agribusinesses—to force through price rises. Many basic food costs are up nearly a third in the last 18 months.

A recent report from the Oxfam charity showed that the number of people facing severe hunger around the world has increased sixfold from the end of 2019 to June 2021.

The starving people of Madagascar cannot afford to buy the food that is available.

There can be, and must be, immediate measures to save lives in Madagascar.

But unless there is urgent action to halt climate change, large parts of the country will become uninhabitable due to climate change.

Madagascar is another example of how the fight to stop climate destruction cannot be separated from class battles against ­capitalism and its priorities.