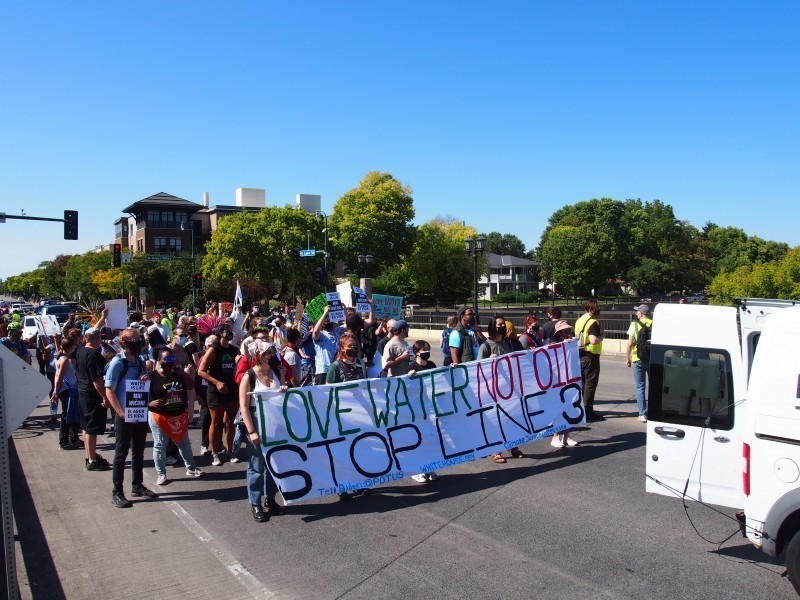 Minneapolis, MN – On September 18 nearly 100 people rallied and marched to call for an end to the Line 3 oil pipeline. The Climate Justice Committee organized the rally to continue pressure on President Biden and Minnesota Governor Tim Walz to end the permits for Line 3.

Michael Johnson, an indigenous youth organizer with the Bloomington Anti Racist Coalition, started out the rally telling organizers, “As a young person, it’s difficult to let your voice be heard. But I say our time is here and now. If you truly label yourself as an indigenous ally, use your voice, sign petitions, show up at rallies and get involved.”

The Line 3 oil pipeline runs through Minnesota crossing the Mississippi river at several points and violates the sovereignty of the Anishinaabe peoples and their land.

Speakers made connections with other important struggles. Joe Vital from the East Phillips Urban Farm Initiative talked about their fight for community control in fighting industrial pollution and building a community space that empowers the residents and combats historic environmental racism.

The protest marched to the Mississippi River to honor the water. Speakers made connections to the fight for community control of the police in the form of a civilian police accountability council (CPAC); the fight for Palestine and their indigenous struggle against Israeli occupiers; and the fight of students for control of their campus demanding university CPAC as well.

CJ McCormick from the Climate Justice Committee said, “We need control over our own communities – the power to clean our air, to support ourselves, and to determine how our own spaces are used. That needs to be our future.”