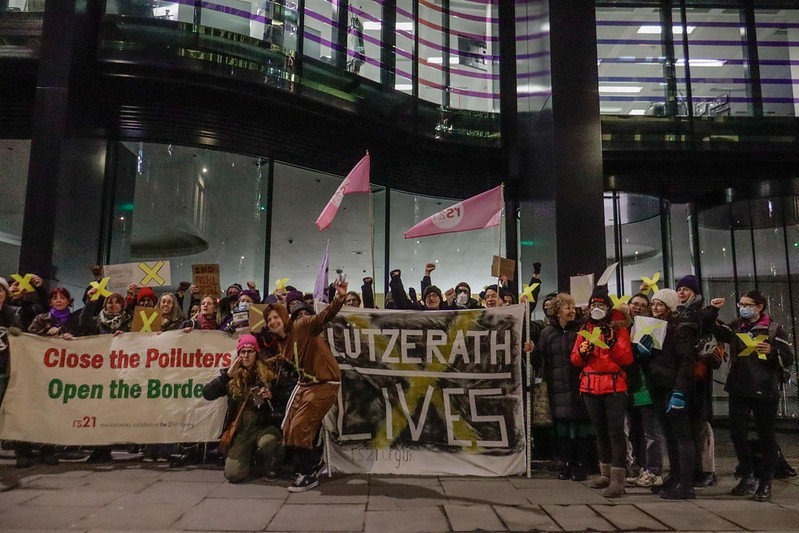 A German-based multinational is bulldozing a village to expand a lignite coal mine. Lignite generates much more CO2 than gas, as well as a cocktail of pollutants. rs21 members report from a protest outside RWE’s London office.

On the evening of 19 January, shouts of ‘Lützi lives’ echoed around corporate offices near the Bank of England. An area usually reserved for the wealthy, suit-wearing class, rushing to their next meeting, or office workers grabbing an overpriced sandwich, was taken up by a crowd carrying yellow X’s and banners. As around 50 people protested outside RWE’s London trading office, the lights were quickly turned off and employees were ushered safely out of the back door.

RWE are a notorious mega-polluter, and the operators of the Garzweiler lignite coal mine. As rs21 has reported previously, the mine’s latest expansion would mark the destruction of the village of Lützerath, another settlement sacrificed to extract as much coal from the ground as possible. Instead of taking this lying down, thousands of activists have spent the last fortnight blockading the police eviction, while the cops have responded with arrest and indiscriminate violence.

The demonstration outside RWE’s London office was called in solidarity with the community cleared for the mine, and to stand with our fellow environmentalists facing violence. rs21 called the demo to rebuild international solidarity and highlight Britain’s role in pollution and activist repression.

Speakers from Fossil Free London spoke of the role that the British finance system has in supporting projects like the Garzweiler. They highlighted the massive $340 million loan given by HSBC to RWE for the mine expansion, and the need to struggle in London against these banks.

Global Justice Now speakers highlighted the Energy Charter Treaty (ECT), legislation which allowed polluters to sue governments for the impact of their climate targets. For example, RWE sued the Dutch state for $1.67 billion based on their 2030 plans to phase out coal. Global Justice Now are continuing to organise to get countries like Britain to withdraw from the ECT.

Representatives from Earth Strike London talked about the need for worker-climate action. In particular they focused on the importance of organising in the workplace, and bringing climate politics to that space. They also highlighted the proposed anti-union laws, the importance of environmentalists standing in solidarity with striking workers, and uniting around the 1 February day of action against anti-union laws.

Messages of solidarity were read from Scot.E3, who are campaigning for a worker-led transition in the North Sea Oil field and from the campaign against the coal mine in Cumbria.

CD stands with the Wet’suwet’en

Russia stands firm against the latest imperialist provocation over Ukraine