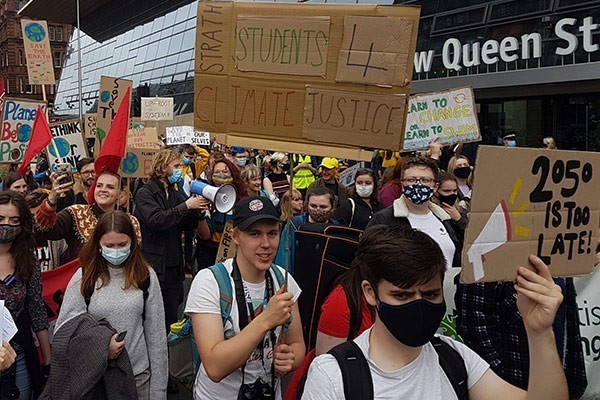 Tens of thousands of young people around the world took to the streets on Friday in the first global climate strike since the beginning of the pandemic.

The international day of action came ahead of the Cop26 world leaders’ summit on climate change in Glasgow in November.

In Germany, youth climate activists had planned over 400 separate strikes.

Greta Thunberg—who inspired a wave of school climate strikes in 2018—joined a 100,000-strong protest in Berlin. Speaking just days before the German elections, she told that crowd it’s “clearer than ever that no political party is doing close to enough”.

“Yes, we must vote, you must vote,” she said, “but remember that voting only will not be enough.

“We must keep going into the streets.”

In South Africa, thousands took to the streets in 12 cities as part of a three-day climate strike. They called on the African National Congress (ANC) government to push through a just transition.

And in Bangladesh protesters demanded the state scraps plans for new coal and gas power plants.

Meanwhile, hundreds took to the streets in towns and cities across Britain as part of the day of action.

Around 300 people gathered at Parliament Square, central London, and took off on a spirited march.

“They make targets like Britain being carbon neutral by 2050.This is too late it needs to happen decades earlier.”

Lars said he has been drawn into climate activism because he believes the “system cannot be reformed to save us from the climate crisis”. “I’m really into direct action,” he said. “I think it’ll be essential in the battles ahead, but I do think they should be built as big as possible to have the most impact.”

The climate strikes in Britain were smaller than previous mobilisations in 2018 and 2019.

Protester Sadie explained that the “pandemic has had a massive impact on the momentum of the climate strike movements”. “Many of those who took part in the 2019 strikes have dispersed elsewhere to university,” she said.

“But just because the numbers are less this time, it doesn’t mean the anger has gone away. We just need to find a way to fan the flames again.”

On the same day climate activists in east London staged a protest to stop the construction of the Silvertown Tunnel. They included several trade unionists from the NEU education and RMT transport unions.

The tunnel under the River Thames is set to have four lanes for cars.

Around 200 joined strikes in Bristol and over 300 took to the streets in Glasgow. There were also strikes in Manchester, Sheffield, Canterbury, Oxford and Birmingham.

At the strike in Glasgow, Daniel told the crowd, “Cop26 will continue to fail to address the climate crisis.

“We must reject Joe Biden, Boris Johnson and the other climate ghouls.This is the 26th Cop—so why are we only just realising the problems we are facing are dire and will affect all of us?”

On the same day as the global strike, the state’s clampdown on Extinction Rebellion continued.

Former Paralympian James Brown, who climbed on top of a British Airway plane at London city airport in 2019, was sentenced to a year in prison. Judge Gregory Perrins shamefully told Brown he had “cynically used your disability to put your plan into action” to execute the action.

The protests at the Cop26 summit on Saturday 6 November—in Glasgow, London and other towns and cities across Britain—are a crucial next step for the movement.

Every activist should throw themselves into making them as big—and militant—as possible.