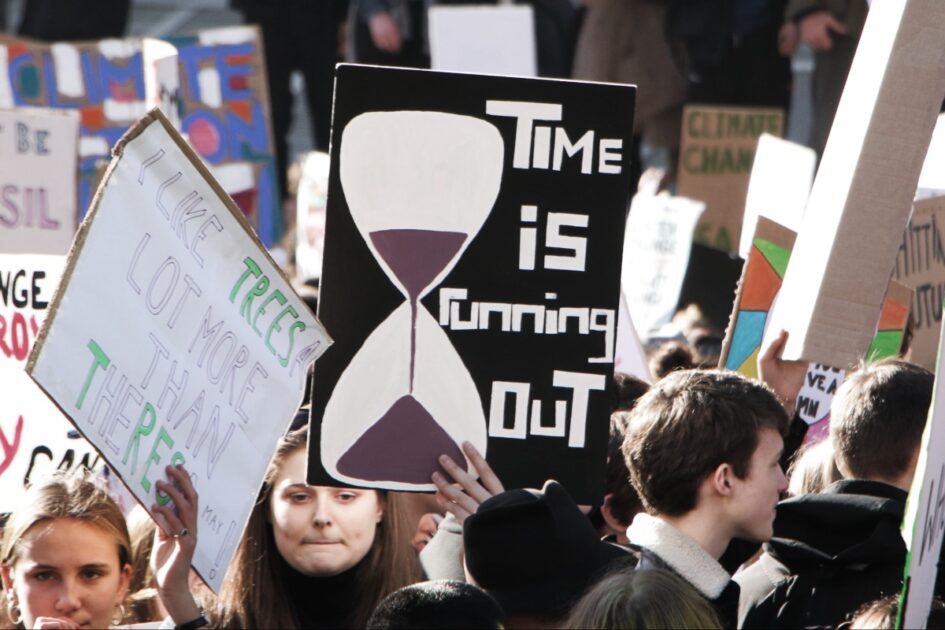 A recent study conducted by the IPCC (Intergovernmental Panel on Climate Change) has concluded that the world is facing unprecedented and potentially irreversible damage due to global warming.

The United Nations’ secretary general, António Guterres, has described the report as a “code red for humanity”, with its warnings that the Earth is almost certain to see warming of over 1.5°C, causing severe disruption to weather patterns and ecosystems.

And yet faced with this catastrophe, the ruling class remains largely unmoved. For all their hand-wringing and laments, in truth the capitalists and their political representatives have barely lifted a finger.

The reason for their lethargy is clear: in the final analysis, it is they and their system that are to blame for this crisis.

Wolf at the door The IPCC’s alarming findings are not an exaggeration or a lie, as some climate change sceptics have stated, but a real, material, and imminent threat – one that is already evident across the globe.

Many countries have been faced with devastating extremes of weather this summer.

In Greece, mass wildfires recently erupted in a number of areas. These fires have engulfed a hundred thousand hectares of land, and have led to at least three deaths, hundreds of homes being destroyed, and thousands of people having to flee their homes.

Turkey too has seen wildfires along its south coast, resulting in eight deaths and thousands having to abandon their homes. In Italy, meanwhile, wildfires have led to at least four deaths.

Last month, meanwhile, the west coast of North America was hit by a deadly heatwave. And around the same time, huge floods wreaked havoc in Germany and in the Henan province of China.

Calamitous weather events such as these are all set to become more frequent and severe, according to the IPCC’s latest analysis.

Already, studies are beginning to show that the Atlantic Meridional Overturning Circulation – which carries warm water from the tropics northward – is threatened with total collapse, due to warming of the atmosphere.

Such a collapse would have dramatic consequences, cooling the northern hemisphere, and leading to rising sea levels in the Atlantic.

At the same time, research shows that increasing temperatures from climate change are likely to have a disastrous impact on crop growth.

While some areas may see increased yields, for example in Europe and China, these crops are likely to face a much higher risk of destruction via pest infection, which is already a major cause of agricultural failure. It is clear that the current system is not sustainable, but is destroying the environment at a breakneck pace.

As Guterres’ “code red” alert shows, even leading figures of the establishment have been forced to acknowledge the gravity and urgency of the situation.

“The alarm bells are deafening,” the UN secretary general stated in response to the IPCC’s latest analysis. “This report must sound a death knell for coal and fossil fuels, before they destroy our planet.”

“If we combine forces now, we can avert climate catastrophe,” the UN chief continued. “But, as today’s report makes clear, there is no time for delay and no room for excuses. I count on government leaders and all stakeholders to ensure COP26 is a success.”

While Guterres’ words are sharp in tone, however, they entirely miss the truth of the matter.

As with previous climate summits, COP26 – this year’s UN Climate Change Conference – will provide yet another display of passivity, apathy, and foot-dragging by establishment politicians and their capitalist chums; that is, by the very ruling class that is responsible for killing our planet.

“Government leaders” and so-called “stakeholders” (read: big business) will do nothing to put out the fires of climate change. In reality, it is they – and the capitalist system they represent and defend – that are the arsonists.

Profits vs the planet ‘Our’ government in Britain is a clear case in point.

COP26 is to be held in Glasgow, under the presidency and auspices of the UK government.

But despite all the hot air and promises about a ‘green industrial revolution’, what have Boris Johnson and the Tories actually done to seriously address the climate crisis?

Tory rhetoric regarding the climate is nothing but stinking hypocrisy.

For example, responsibility for organising the latest COP talks lies with Alok Sharma, a Tory minister who was previously Secretary for Business.

Recently, speaking about the importance of the Glasgow summit, Sharma described the potential impacts of climate change as “catastrophic”. Yet in the same breath, the Tory MP defended the government’s support for the exploration of new gas and oil fields in the North Sea.

Given their history of corruption and cronyism, it should also come as no surprise to discover that the Conservative Party received over £400,000 in donations from the fossil fuel industry in advance of the Tory government’s decision to grant licenses for these explorations.

The same prioritisation of profits over the planet can be seen from capitalist governments across the world.

Billions vs the billionaires In the past, big business politicians would attempt to divert the blame onto individuals. Ordinary people were said to be the problem, for consuming too much; or simply for existing in too large a number.

Such Malthusian nonsense clearly does not wash these days, however, when billionaires are shooting into space, while billions face the prospect of hunger, disease, and poverty.

In fact, it is well known by now that a handful of major monopolies are responsible for destroying the environment. One hundred corporations, for example, account for over 70% of greenhouse gas emissions.

Instead, world ‘leaders’ now have a new strategy: to give the appearance of being busy addressing climate change, whilst actually just going about business as usual.

Such posturing is expressed in governments signing up to countless toothless international agreements; or participating in summits and conferences that offer, at best, surface level sacrifices – commitments that are usually duplicitous, and that are mostly scaled back (or simply dismissed) within a few years.

Even worse, the capitalists and their representatives are also trying to profit from the climate crisis itself – with bankers providing portfolios of ‘sustainable investment’, and corporations ‘greenwashing’ initiatives that are, in reality, contributing towards the destruction of the environment.

Capitalism is killing us

The capitalist class can offer no solutions to this crisis – for it is they, and their system, that are the problem.

The apologists of capitalism say that businesses are simply responding to demands of the ‘overconsuming’ masses. But this is completely false: the only appetite that the capitalists are attempting to satisfy is their insatiable hunger for profits – all at the cost of the working class and the environment.

It is capitalism – a system based on profit and a competitive race to the bottom – that is responsible for climate change and ecological destruction.

But we do not have to resign ourselves to this apocalyptic status quo. Science and industry have developed to a point that would allow for humanity to live in harmony with the environment.

The problem is that capitalism – based on the private pursuit of profit and the anarchy of the market – cannot harness this potential. Instead, capitalism has become an enormous barrier to innovation and scientific development.

Only on the basis of a rational, democratic, socialist plan of production – with public ownership and workers’ control – can we fully utilise society’s resources, technology, and collective knowledge in order to address the climate crisis with the urgency that is required. The first step on this path is to organise workers and youth to fight for revolutionary change, not climate change.

The so-called ‘natural’ disasters breaking out across the world show that we cannot afford to sit around and wait for capitalist politicians to take action. Instead, these cynical ‘leaders’ will just hide behind the smokescreen of international summits, while big business continues to destroy the environment.

The already ruinous effects of their actions show that it is the working class who will be made to pay the price for their profit-seeking, as communities are devastated by floods and fires, homes are evacuated, refugees flee from drought and famine, and more and more die.

We – the working class, the youth, and the downtrodden masses across the world – can rely only on ourselves to act. This means organising and mobilising to dig a grave for capitalism, before capitalism digs a grave for our planet.