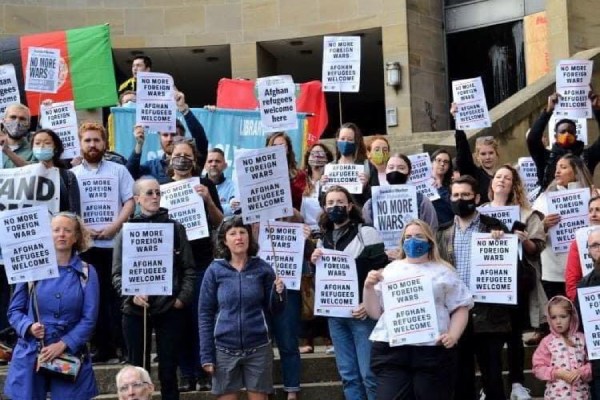 Desperate refugees and migrants who have overcome fearsome obstacles to reach Britain have been met with appalling treatment once here.

Some refugees from Afghanistan who recently arrived have received such bad treatment that they have asked to be sent back.

The Tories’ Operation Warm Welcome—their resettlement scheme to bring over Afghan refugees—has been a failure from start to finish. Some 7,000 asylum ­seekers are currently stuck in hotels.

The Home Office says it’s unable to give these people a time frame for when they will be placed in permanent accommodation. Estimates say asylum seekers will be trapped in the emergency temporary accommodation for months.

Meanwhile their legal statuses—from asylum seekers to refugees with indefinite leave to remain—are in limbo.

One doctor who has been ­working with newly arrived Afghans for weeks said, “I’ve had a few patients telling me they want to go home. One guy, who was 67, kept saying, ‘I can’t take this anymore. I have to get out of this room.’

“Another said, ‘I just want my freedom from the hotel.’ I had to put him on medication, and his wife, because they were so upset.”

More than 15,000 people have been evacuated from Afghanistan since 13 August.

Around 8,000 Afghans who worked with British forces during its 20 year occupation of Afghanistan have been brought over as part of the Arap scheme.

The ACRS scheme aims to bring an arbitrary 20,000 Afghan refugees to Britain over a number of years.

Launched on 29 August, Operation Warm Welcome has shown the Tories’ incompetence, and lack of care for refugees.

Already a lack of essentials such as baby milk and food, and access to GPs who can provide medication, has left Afghan refugees vulnerable.

Sheffield Council has said it has concerns over the suitability of hotels for holding Afghan refugees.

Five year old Mohammed Munib Majeedi fell to his death from a hotel window there in August soon after arriving in Britain.

Some contractors at hotels were unaware they were supposed to help people register with a GP and explain what they’re entitled to.

The Local Government Association (LGA), which represents 328 of the 333 councils in England, has criticised the Home Office.

It told ministers to stop sending contradictory and confusing data over the numbers of Afghans and their needs.

“The government needs to engage more fully with local authorities and share regular data about numbers, needs and strengths of Afghan refugees and others recently resettled,” said an LGA spokesperson.

Boris Johnson boasted about Operation Warm Welcome when it was launched.

But, as the failures reveal, the Tories have nothing but cold-hearted disdain for refugees.

The Tories are preparing for another round of attacks on people trying to cross the Channel to Britain.

Some 40 boats with 1,115 migrants on boats crossed the Channel last week. The Border Force picked up 491 migrants on 17 boats last Saturday, while French authorities prevented 114 people from crossing.

Some 3,879 people made the dangerous journey—across one of the busiest shipping lanes in the world—in September. That’s the highest than in any other month.

The Tories are demanding a greater crackdown from the French authorities. Home secretary Priti Patel is withholding £54 million that would have doubled the number of police patrolling French beaches until more people are stopped.

The Home Office points the finger of blame at “ruthless people smugglers”. But people smugglers are only able to operate because of the lack of legal and safe routes provided for asylum seekers to enter Britain.

Migrants who made it to Britain have been held on busses and forced to sleep in coaches or benches while they await longer-term accommodation.

The Border Force has set up tents and portacabins in Dover car parks, claiming it is “overstretched” by the “surge in numbers”.

But this isn’t the “crisis” the right claim it is—there is plenty of money and space to house refugees.

Far more refugees—34,000—applied for asylum in Germany from June to August this year alone.

It isn’t a rise in migrants crossing that is to blame. It’s a lack of planning, provisions and empathy from the Tory government. The Dover Independent Monitoring board examined the treatment of migrants at Tug Haven at Dover Western Docks.

The processing centre has been used as a makeshift dormitory, and there are insufficient food supplies and no wash facilities.

Unaccompanied children there have been forced to spend the night in small spaces with strangers.

Some have been taken to immigration removal centres rather than to local councils.

Elderly people have been left to sleep on mats on the floor,

There is also an inquiry into how chemical burns on one migrant were not detected.

If the Tories can deploy planes and boats to track small dinghies, they can provide for migrants.

Instead, they want do all they can to make life as difficult for vulnerable migrants as possible.

Calls to join demos to show solidarity with refugees

Stand Up To Racism (SUTR) is calling on activists to join a protest in central London against the Tories’ racist Nationality and Borders Bill.

The bill seeks to criminalise migrants who travel to Britain via “illegal” means.

The protest, set to take place in parliament square on Wednesday of next week, has been called by a coalition of organisations under the banner Together With Refugees.

SUTR is also calling on groups outside London to initiate solidarity events.

It wants trade unionists in workplaces and students on campus to build and hold actions.

Amnesty UK Europe has also called a demonstration on Saturday of next week for its Right to Asylum and Day of Action.

Protesters are set to assemble outside the Italian embassy in central London.

Organisers say they “will be campaigning against the criminalisation of refugees.”

“We are also campaigning against the collaboration with the Libyan coastguard returning refugees to torture, rape, and extortion in Libya’s DCIM [Directorate for Combatting Illegal Migration] Centres,” they added.

Protesters will then march to the Embassy of Malta.

This is to campaign for charges to be dropped against three young boys who helped to negotiate the rescue of more than a hundred refugees to Malta.

Finally, demonstrators will go to the Home Office to call for safe status to be given to all asylum seekers and refugees from Afghanistan and Syria.

Resistance against the Tories’ bill is crucial for it to be pushed back, and to continue the fight for refugees to be welcomed in Britain.