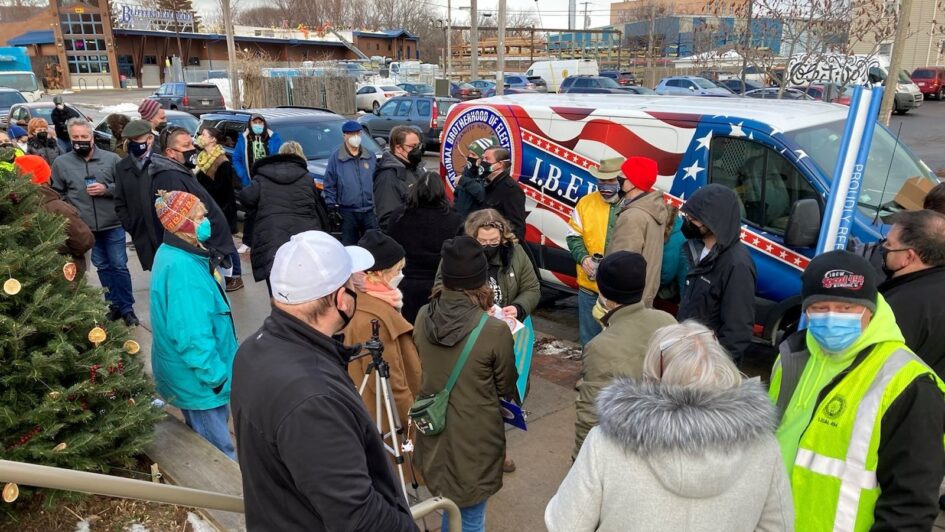 Workers at Colectivo Coffee Roasters, members of the International Brotherhood of Electrical Workers and community supporters rallied and marched on the company’s Milwaukee headquarters Jan. 12 to deliver a petition with more than 2,200 signatures, demanding that the company stop stalling the certification of a National Labor Relations Board election that saw workers vote in favor of unionization.

After a long organizing effort that started in late 2019, the election, held in April 2020, resulted in a 99-99 tie with the fate of seven challenged ballots determining the outcome. Despite Colectivo owners Lincoln and Ward Fowler, Paul Miller and CEO Dan Hurdle spending hundreds of thousands of dollars to hire the union-busting firm Labor Relations Institute — which led an anti-union campaign that sought to crush morale through sudden firings, captive audience meetings and targeting of pro-union employees for extra discipline — Colectivo workers won their union in August when all seven challenged ballots were opened, unanimously favoring the union. In the wake of the election, Colectivo issued a letter to its employees which promised, “We will, of course, respect the rules and bargain in good faith.”

However, good faith has been hard to come by from Colectivo’s owners, as they have continued to appeal the election results to higher and higher bodies of the NLRB, arguing that the votes of employees that have quit or been fired since the election, should not be counted, and that employees in Chicago acted illegally when they walked to the Post Office together to mail their ballots.

These objections have already been dismissed by NLRB chairperson Lauren McFerran, who wrote in her decision that the challenge to the election was “denied as it raises no substantial issues warranting review. The Employer’s Motion to Stay Election Proceedings is denied as moot.”

Colectivo is preparing to file a third appeal, challenging the validity of the election. This has frustrated Colectivo workers and union organizers, and angered many in the community. “There is so much support out in Chicago. I’ve been out collecting signatures for the petition … as soon as they hear this about the union they turn around and stop to sign,” said Kait Dessoffy, a union organizer and cafe worker in Chicago who made the trip to Milwaukee to participate in the petition delivery. “It’s so exciting. We have gotten so much community support and customer outreach. I think management, the bosses are always going to oppose it but literally everybody else is on our side. They are very clearly outnumbered.”

“This is nothing more than a stall tactic, and a stall tactic to weaken your solidarity and hoping that you will go away,” said IBEW International Vice President David Ruhmkorff, who spoke at the rally prior to the delivery of the petition. “But we stand strong. We’ll stand strong today and we’ll stand strong in the future, but we need that contract by May of this year.” Ruhmkorff went on to state that he was committed to buying 2,500 bags of coffee from Colectivo for the upcoming IBEW International Conference if a contract has been negotiated by then.

This statement put Colectivo on notice that the workers and the union will not stand for any more delays and demand that Colectivo end its baseless appeals, which have already been dismissed twice by the NLRB, and come to the bargaining table in good faith as they promised. Despite these continued efforts, Colectivo workers remain confident in the legitimacy of their victory and have begun surveying their co-workers about what items they would like discussed when bargaining finally gets under way.

Considering Colectivo has failed to act in good faith thus far, organizers realize that reaching an agreement on a contract will require continued struggle. “I really underestimated the power differential we were up against,” said Dessoffy. “I think that realizing exactly what we needed to overcome was really daunting initially but then the fact that by coming together and pushing in the same direction, it’s moments like that when we start to really move the needle that is really empowering.”