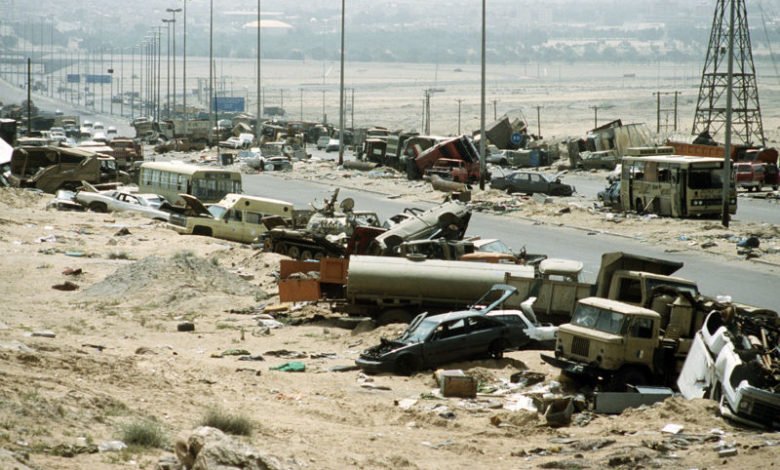 Aftermath of the 1991 “Highway of Death” massacre carried out while Powell was the top officer in the U.S. military. Credit — samer (Flickr)

Colin Powell, former Secretary of State under the George W. Bush administration and key promoter of the Iraq war, passed away Monday at the age of 84 due to health complications from COVID-19. Although hailed in the mainstream media and among elite politicians as a shining example of bipartisanship and integrity, Powell left behind a legacy of destruction and massive civilian death across the world, most notably in Iraq.

One of Powell’s most egregious contributions to the invasion of Iraq in 2003 was his address to the United Nations Security Council. While Rumsfeld, Cheney, Wolfowitz and other rabid war hawks had little credibility internationally, Powell had developed a public image that inspired far more confidence. During the UNSC meeting on February 5, 2003, he presented as the Bush Administration’s top salesman justifying the impending destruction of Iraq. He argued this was necessary because of Saddam Hussein’s supposed arsenal of Weapons of Mass Destruction – all based on non-existent evidence and made up “hard intelligence.” It is all captured in an infamous image of Powell holding up a model vial of anthrax to dramatize his point, intentionally lying to the Security Council and the world.

During the first Gulf War in 1990, Powell was serving as the chairman of the Joint Chiefs of Staff — the top general in the U.S. military — as unbelievable devastation was wrought on the Iraqi people. 200,000 Iraqis were killed in the conflict, many of them in the infamous “Highway of Death” massacre when U.S. forces slaughtered retreating Iraqi forces that posed no threat — which is a war crime. When asked about how many Iraqi civilians were killed in the Gulf War, Powell said: “It’s really not a number I’m terribly interested in.”

In between the two wars, while Powell was still head of the Joint Chiefs, the U.S. imposed a suffocating sanctions regime on Iraq. According to estimates published by the highly-respected British journal The Lancet, 567,000 children died because of these sanctions.

In 2003, Powell’s blatant lies and fabrications against Saddam Hussein led to massive Iraqi civilian casualties and sowed chaos in the country, ultimately leading to over one million Iraqi deaths over the course of the protracted occupation.

Powell’s participation in the crimes of U.S. imperialism goes as far back as the Vietnam War, particularly in connection to the horrifying 1968 My Lai massacre, where Vietnamese civilians were mercilessly slaughtered by U.S. soldiers. When tasked with investigating the massacre, not only did he downplay the horror, he lied to the American public by claiming “relations between American soldiers and the Vietnamese people are excellent.”

Just like other architects of war and war criminals, Powell’s legacy is being sanitized by the rich and powerful. It is important to remember that throughout his career, Powell advocated for, justified and carried out unspeakable destruction in targeted countries. Colin Powell was a servant of empire through and through – a role he carried out unabashedly regardless of the human cost.

London’s top cop must go after new insult to women