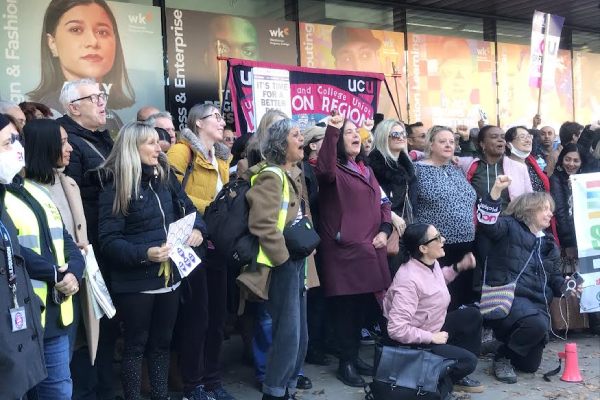 A confident mood on the college workers’ picket lines

Solidarity poured onto the picket line at Westminster Kingsway College in central London on Wednesday.

Workers at ten colleges in London and Liverpool are striking on various days this week.

Nancy, who teaches at Westminster Kingsway, told Socialist Worker she’s feeling “determined” going into the second round of strikes. “We’re in it in the long haul,” she said, “things need to change.”

Nancy says workers are angry at education cuts. “They’ve taken away nursery facilities for our students,” she explained. “And so it has been a real struggle for many of them to afford and find childcare.

“This shows how little college management care about their students or their staff.”

Paul, another Westminster Kingsway striker, said there is an environment of “distrust and insecurity” at the college. “Line managers put in policies designed to harass staff, like lesson observations,” he told Socialist Worker.

“And there is a real mistrust of staff coming from management.

“My thoughts are, is management at my college wants to break the union? That’s the feeling we get.”

Heather works at City and Islington college (Candi), another one of the colleges on strike. She told Socialist Worker she was angry about “managers managing managers”. “We’ve seen the top layers of our college grow,” she said.

“But those further down get a lousy deal.

“Cleaner and learning support assistants are on zero-hours contracts.

“In contrast, the salaries of some of the managers could employ teaching staff three or four times over.”

UCU general secretary Jo Grady told the rally that college workers were asking for the “bare minimum”. She said they hadn’t experienced two years of cuts to pay and conditions—but two decades.

At the end of the rally, Candi striker Sean Vernell told the crowd that action wouldn’t stop “just for a couple of pence”. “If they don’t offer us more, we’ll keep striking,” he said. “We’ll strike for another ten days.”

Negotiations are set to be held on Thursday.

College workers are determined to keep fighting—and there is a chance for college workers to be a part of a wider fightback across education.

UCU members at universities begin ballots for strikes on 18 October.

The next round of strikes will be from 11-15 October. Other colleges are awaiting the result of local ballots to see if members vote for strike again. For a list of colleges on strike and the dates of action go here