College strikes over pay have put workers on the front foot 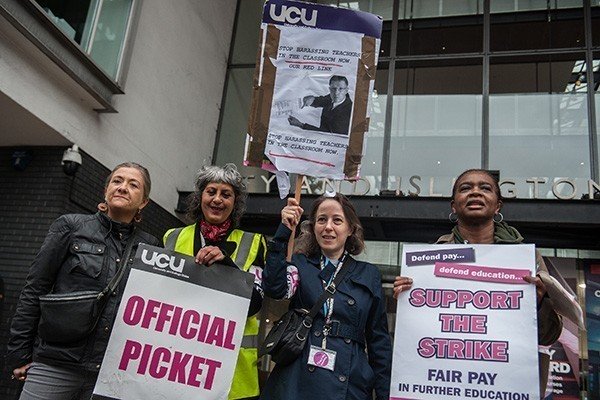 Workers at five colleges in London and Liverpool struck for a third week last week and already strikes have forced the bosses to make concessions.

One striker who works at City and Islington College (Candi) told Socialist Worker that “bullying and increased workloads which feels like bullying” had pushed her to strike.

“I taught across two different curriculums, GCSE and English for speakers of other languages (Esol).

“I was effectively bullied out of teaching GCSE.”

They added that workload went up notably in the last two years when two heads of departments left the college.

Emily, who also works at City and Islington College, said that it is becoming increasingly difficult to keep going despite loving her job. “The main issue is that we’re not supported by managers at all. And really they are completely useless.

“There’s a whole layer of middle management that I couldn’t tell you what they do, well apart from harass us and receive big wage packets.”

A branch officer from the Candi branch of the UCU also pointed to how conditions are worsening at the college.

“Recently 12 people at the college have been made redundant, and they haven’t been replaced.

“Access courses are desperately needed to train the next generation who will work in schools and FE colleges.

“So this isn’t just a fight for our jobs but the future of the education sector” they added.

Over 200 CCCG strikers in London met for a mass meeting on Wednesday of last week to discuss where next for the dispute.

Workers at the meeting wanted to keep on striking until their demands were met. The meeting was also an opportunity to show solidarity with the ongoing strikes at the Royal College of Art.

Strong pickets and large rallies online and outside colleges have kept the strike alive these past three weeks.

Further strikes have the potential to be even stronger as NEU union members at the Islington Sixth form college will also be heading to pickets.

Workers at Croydon college in south London—who had been on strike for two consecutive weeks—called off further strikes after a concession from management.

Bosses agreed to a 2 percent increase for most workers, and 5.3 percent for the lowest paid.

But 2 percent is still below inflation—which means it is still effectively a pay cut.

The concession shows that strikes can force bosses to put their hands in their pockets. Only more of them can win workers’ demands for a proper pay rise.