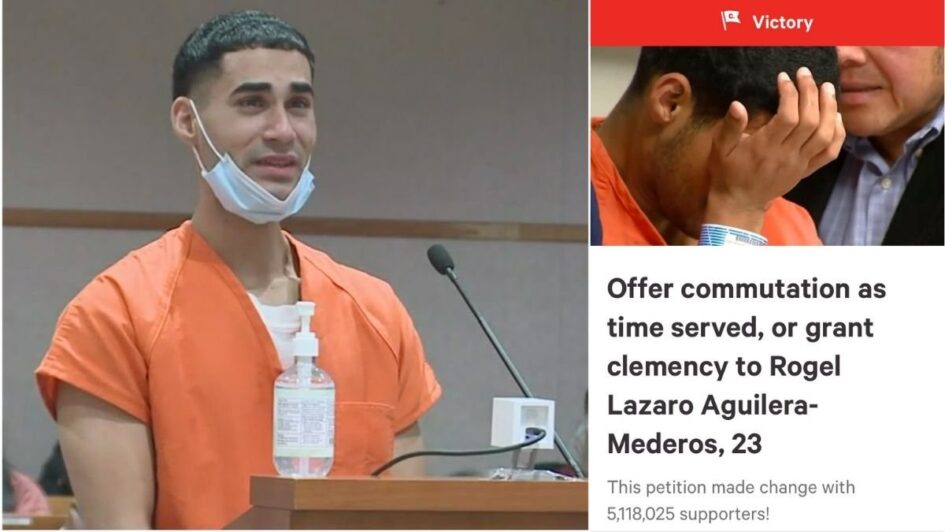 On December 13, 2021, a judge harshly imposed a 110-year sentence on 26-year-old truck driver Rogel Lazaro Aguilera-Mederos in Colorado. Aguilera-Mederos was part of a tragic runaway truck accident in 2019 that led to a fiery explosion that killed four people. The truck driver miraculously survived, but according to an online petition, “Rogel has said several times that he wishes he had the courage to crash and take his own life that day, this tragic accident wasn’t done with Intent, it wasn’t a criminal act, it was an accident.”

The jaw-dropping sentence sparked the outrage of millions of people who signed a change.org petition to ask Colorado Governor Jared Polis to commute part of Aguilera-Mederos’ sentence. On Dec. 30, Polis reduced the Cuban immigrant’s sentence to 10 years.

Judges and D.A.s say, ‘Don’t take away our power!‘

On January 20, two Colorado District Attorneys sent Governor Polis a letter complaining about the reduced sentence. Boulder County D.A. Michael Dougherty, a Democrat, and Mesa County D.A. Dan Rubinstein, a Republican, said that Polis’ commutation “undercut the community’s trust” in the criminal “justice” system. “Sentences should be influenced by facts and circumstances, not by petitions, on-line surveys, or tweets.”

Similarly, the judge in Aguilera-Mederos’ case criticized the commutation: District Court Judge Bruce Jones said, “The court respects the authority of the governor to [reduce the sentence]… Based on the timing of the decision, however, it appears this respect is not mutual.” Jones was set to hear a request from the charging D.A. in Aguilera-Mederos’ case, Jefferson County District Attorney Alexis King, on Jan. 13 to consider reducing the sentence to 20 to 30 years. Judge Jones had said, after the original sentencing, that mandatory minimums required the exceptionally long sentence, and that he would not have chosen to put the truck driver behind bars for life.

The criminal ‘justice’ system: in reality, undemocratic, unchecked and unjust

What these D.A.s and the judge did not criticize, however, are the realities of the criminal justice system.

Mandatory minimums, huge sentences for drug offenses, and “three strikes” laws (which mandate a life sentence after any three felony convictions) mean that many U.S. prisoners spend far longer in prison than those in other countries.

District attorneys and judges are complicit in these huge sentences and incarceration rates. Ninety-seven percent of cases are not resolved in a “trial by peers,” a constitutional right, but by coerced guilty pleas behind closed doors. A significant portion of people that accept plea deals are later exonerated — the National Registry of Exonerations says 20% of plea-recipients have been exonerated since 1989. In 2016, another study by the NRE said that 47% of exonerees are Black, despite Black people being only 13 percent of the population.

Time and time again, district attorneys’ political careers are built off of the number of years they put people behind bars, their number of prosecutions and the many plea bargains they throw at people whose cases don’t go to trial.

In reality, Colorado D.A.s should not be afraid that Polis’ commutation of Rogel Lazaro Aguilera-Mederos will lose them the “community’s trust” — in fact, they never had it in the first place.

Why did Polis actually commute the sentence?

While district attorneys and the judge in this case are unhappy, millions of people very easily saw that even in this case, which resulted in the tragic loss of life after a horrible accident, over-charging nearly took away the entire life of a young truck driver.

But why are judges and D.A.s unhappy with Polis? Both the original judge in the case and the charging district attorney said that they also wanted to reduce Aguilera-Maderos’ sentence.

The myth of the U.S. legal system is that it is based on timeless, objective principles of justice. The DAs, judges, and police are supposed to be simply neutral arbiters of the law. When public pressure succeeds in rapidly overturning 100 years of prison time, it throws into question the justness of the entire legal system. In a time in which public trust in the system is eroded, especially trust in the criminal police, courts, and prisons, Polis’ decision to yield to public pressure exposes the arbitrary and unjust nature of the criminal justice system — as well as the power of the people.

Liberation News collage of Rogel Lazaro Aguilera-Mederos on trial and the change.org petition with more than five million signatures.

How Maryland prisoners took on the governor