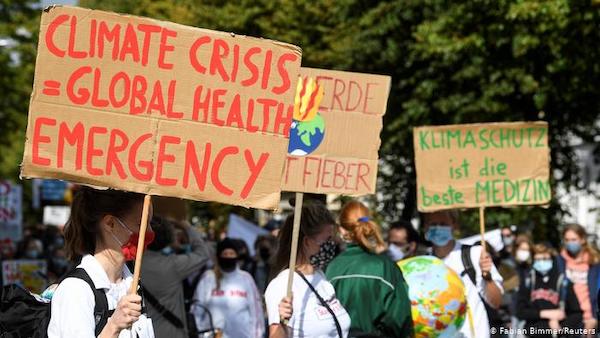 Aftermath of the Paris Agreement in 2015, Conference of Parties (COP) meetings are being held every two years, attended by heads of state, diplomats, business leaders, campaigners and journalists from all nations to discuss the progress achieved since the last conference on various steps taken to avert climate change. In Paris summit 2015, it has been agreed collectively to cut emissions to limit global temperature rise ‘below two degrees and strive for 1.5 degrees. For keeping below two degrees with 650 gig tons of carbon (one giga ton is equal to 100 crore tons), the world nations should drastically make cuts in the release of emissions so as to go back to the 2005 levels.

In order to achieve the above goal, every country was asked to resort to strict emission reductions and set out targets known as nationally determined contributions (NDCs) achievable by 2030. The effects of climate change on communities particularly in the developing Global South are alarming. This is a crisis driven by the ‘haves’, which hits the ‘have nots’ the hardest. The affluent West is historically a pollutant, leaving major carbon foot prints. The West is accessing 75 percent of resources from global South.. The coming COP26 conference in Glasgow next month has assumed special importance in view of climatic disasters that are taking place in different parts of the world in the recent years.

The top 10 emitters which include China, the European Union and United States account for over two thirds of global Green House Gases (GHG) emissions while the poor 100 southern nations account for only 3.6 per cent collectively. Consequently, these countries are experiencing calamities such as severe droughts, deforestation, shrinking biodiversity, rapid species disappearance, unseasonal rains and submergence of land as a result of rise in sea levels.

It is interesting to note that with just five percent of the world population, USA consumes nearly 30 per cent of global natural resources and stands out as a major polluter with a majority of carbon footprints. India and other developing countries demanded the inclusion of common but differentiated responsibilities seeking greater responsibility for reducing greenhouse gas emissions. Eventually western nations had to agree for establishment of annual 100 billion dollars’ worth Green Carbon Fund (GCH) to help vulnerable nations toward off and adapt to the effects of climate change and reward carbon credits for reducing carbon foot prints in environment. Similarly, there was a promise to support initiatives from low carbon energy systems, nonconventional energy generation, promotion of traditional nature friendly biodegradable product local industry, energy efficient transport to drought resilient agriculture with financial assistance.

Hijacking Funds Let us see how the Green Carbon Fund has actually flown into global south. As per OECD data released in 2017, developing nations could access only around 7.1 billion dollars in loans but not as direct grants for ready use. Interestingly, a lion’s share of the yearly Green Caron Fund was appropriated by major global corporations involving green industry giants, mostly in production of renewable energy, green automobile industry, etc, leaving away a minor fraction of 100 billion dollars of the Fund annually to climate vulerable nations.

Adani Solar, India, largest private solar power generation firm, with a combined market cap of 100 billion dollars for example, received substantial grants from Green Carbon Fund, full details of which are not accessible. While ‘Vistaraku’, a small women cooperative startup from Telangana that makes biodegradable food plates and cups using leaves of Palash tree could not receive a single dollar as part of carbon credits despite repeated requests to the task force of Green Carbon Fund of United Nations COP.

A major issue for discussions of the Cop talks should be on the legal mechanisms for governments to hold each other accountable in dispensing the Green Carbon Fund. The Fund portfolio necessitates its democratization, just spending of funds with total transparency and accountability.

Transparency and accountability should be part of the agenda of the forthcoming COP26. Democratisation of Green Carbon Fund enables procedural climate justice.

Another key responsibility of the COP26presidency is to mobilize objective Green House Gas reduction targets that primarily match the measured temperature goals of the Paris Agreement. This means global emissions need to fall 45 per cent from 2010 levels to slow global warming. Negotiations and decisions taken in COP26 should bind the nations to legal mechanisms for governments to hold each other accountable. Green capitalism as manifested in monopolising of Green Carbon Fund by global multinational corporations ignoring poor global South needs to be regulated especially in sectors of renewable energy technologies, waste reclamation, green automobiles, trading carbon credits or even ecotourism. Instead of curbing very mass production fuelling, mad consumerism by plundering nature’s destruction, in search for higher profits should be stopped immediately.

Metabolic rift is a term developed by renowned ecologist John Bellamy Foster to refer to Karl Marx’s understanding of ecological disruption under capitalism. Capitalism in its pursuit of maximum profits depletes soil of its natural fertility for commodity production and disturbs the nutrient cycle–the cycle that allows us to produce food and also regenerates the biosphere. Marx said the nutrient cycle had been broken by the capitalist mode of agriculture and is the biggest environmental crisis. Hence, a healthy relationship between society and nature allows for the reproduction of the conditions needed to sustain society.

Discussions in the forthcoming COP26 should focus on democratisation of climate finance that enables procedural climate justice. (IPA Service)

Proletarians of all countries, get vaccinated!Пролетарии всех…