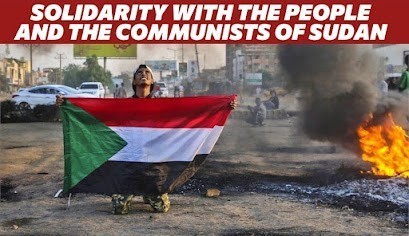 In a joint statement, more than 35 Communist and Workers’ Parties from all over the world condemn the military coup in Sudan and express their solidarity with the communists and the people of the African country.

“The Communist and Workers’ Parties signing this Joint Statement condemn the military coup that took place over the last hours in Sudan.

We salute the persistent struggle of the Sudanese people for freedom and social progress, against their exploiters and the interference of the imperialists seeking to exploit the natural resources of Sudan and use it in their strategy to dominate the region.

We express our full solidarity with the communists and the people of Sudan, who since December 2018 have started a heroic struggle to liberate their country from dictatorship and tyranny. Today they organize and participate in mass mobilizations against the attempts to overturn the results of the 2018 popular uprising and are currently fighting for the restoration of their political and trade union rights and freedoms.

The people of Sudan will win!

The coup will fail!

(The statement is open for further subscriptions)