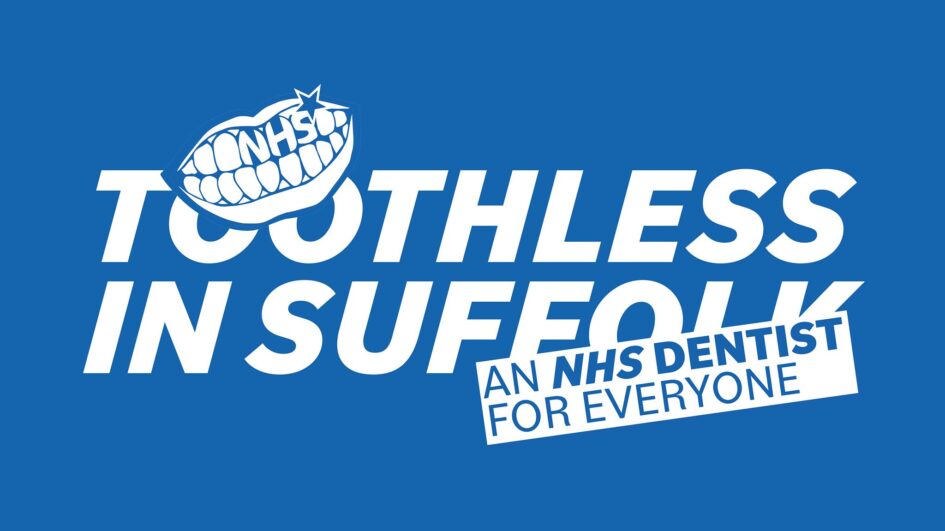 Communists in the East of England have now set up a third centre for their campaign to restore dental care to local towns and rural areas.
There is a crisis of care provision, with some major cities such as Cambridge and Ipswich dipping below the fifty per cent mark of adults qualifying for NHS cover.
“There’s a smash and grab on our NHS dental provision and people are really suffering in big numbers. Doctors surgeries are overrun with requests for antibiotics and pain relief, for conditions that should be dealt with by dentists. But so much provision has been privatised, that dental surgeries are opening and closing more regularly than high street retailers. Some small towns have no provision at all, or are reliant on a single privatised provider,” says CP district secretary Steve Marsling.
“There was no way the communists would turn a blind eye to this development” echo Felixstowe campaigner Mark Jones and Bury St Edmunds Communist councillor Darren Turner. So local party branches are out at weekends collecting signatures for a “Toothless” campaign petition, picketing the surgery of dental services minster Jo Churchill MP and writing in the local press. Activists have been interviewed on local radio and grabbed fulsome coverage in local papers.
Commissioners have been lobbied and doctors approached with a proposal to establish an interim ‘mobile service’. “We want to spread this campaign to every locality,” says Steve. “It is the working class who are being hit the hardest but in fact, all are affected, especially pensioners. We have been inspired by the campaigning to keep the QEH open in Kings Lynn and know too well, the anger that exists locally at the destruction of our health service. What’s happening to dental services is similar to the strategy used by the government to privatise the postal service. Both these have had a big and negative impact on life in rural areas. So we are fighting back.”
If communists, YCLers and supporters want to get involved – we urge you to set up local campaigns – we will help with posters, petitions and ideas – email us at [email protected] to get in touch.