Communists in Vienna: “We are not paying for your crisis!” 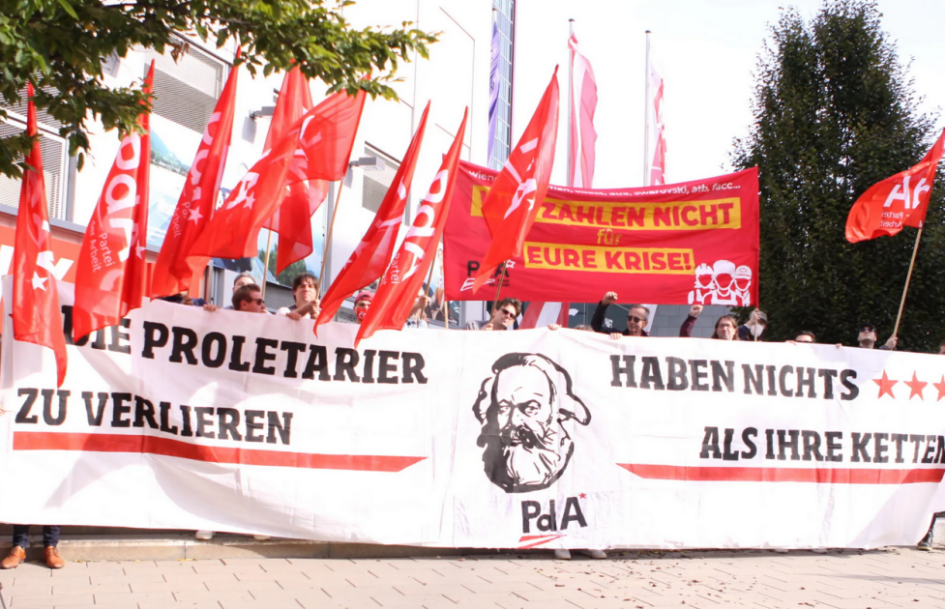 “We are not paying for your crisis”. Under this campaign slogan, the Party of Labour of Austria (PdA) organized on Saturday 3 October a political rally at the headquarters of the Chamber of Commerce at Wiedener Hauptstrasse in Vienna. In the coming weeks and months the party will intervene with a campaign which, among others, will focus on the collective bargaining and will try to expose the treacherous role of the social democratic labor aristocracy.

Speeches at the PdA rally were delivered by Tibor Zenker, the party’s chairman, as well as Raffael Schöberl, former chairman of the Communist Youth of Austria (KJÖ).

In his speech, Tibor Zenker refered to the crisis of capitalism, the particular issues in the health system and ecology, the crisis of democracy, imperialism, militarism and war. The PdA chairman said that the solution for all these crisis lies in the class struggle and the fight for socialism-communism.

Regarding the current situation in Austria Zenker pointed out that the bourgeois class and her ruling parties are utilizing the crisis in order to prepare new profits. Towards this direction they restructure the market, proceed to mass layoffs and push wages down, promote the short-time working model and “feed” the companies with immense sums of state money in order to implement such policies. “These subsidies come from the wallets of the working class who pays bulk of taxes while monopoly capital receives tax reliefs”, underlined Zenker and added: “The losses of the crisis are socialized so that future profits can be privatized and monopolized again. Monopoly capital and its government do everything so that the burden of the crisis is placed on the working class”.

Zenker also stressed out that the PdA defends the democratic rights of all the people in Austria regardless of origin or language and opposes attempts to divide society based on xenophobia, racism or on the basis of the recent pandemic policy. The task of the Party of Labour, the chairman added, is to enlighten the working class about the system of exploitation, oppresion and deception, to mobilize and support the people’s independentactivity, to train and organize them, “against the attacks of capital as well as against the illusions of social democracy and ‘left’ opportunism”.

“Socialism will not be immune to pandemics – Tibor Zenker underlined – but it will be immune to exploitation, oppression, war and economic crises”. That is why “we don’t want to be, like others, the doctor at the bedside of capitalism, but its gravedigger” added the chairman of the PdA.