Communists of the world bid farewell to Mikis Theodorakis 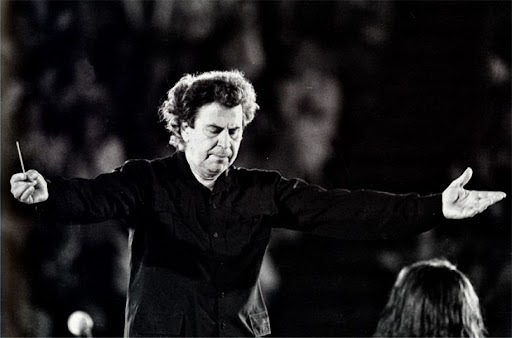 Communist Parties from Russia to Chile and from Turkey to Mexico express their condolences for the death of the legendary Greek composer Mikis Theodorakis who died on September 2nd aged 96.

In a message published on Twitter the President of the Republic of Cuba Miguel Díaz-Canel Bermúdez pays tribute to the late composer:

“Mikis
Theodorakis died and the world accompanies the mourning of Greece for
one of the greatest musicians of all times. Cuba, which always had his
militant solidarity, also mourns. Let the Canto General sound in his
memory”.

The Ambassador of Cuba in Greece Zelmys
Maria Dominguez Cortina also expressed Cuba’s condolences for the death
of Mikis Theodorakis in a letter addressed to his family and friends.

In a statement, the Central Committee Communist Party of Chile refers to Theodorakis as “one of the most important contemporary composers and permanent fighter for the liberation of humanity”, pointing out that he was “a staunch activist in solidarity with the liberation cause of the Chilean people in the dark years of the dictatorship”.

The Party also mentions the monumental work of Theodorakis, Canto General, which is based on the poerty of Chilean poet Pablo Neruda, characterizing it “an important contribution to the culture of our continent”.

In a message addressed to the Communist Party of Greece (KKE), the Presidium of the Central Committee of the Communist Party of the Russian Federation  expresses “its heartfelt condolences over the death of Comrade Mikis Theodorakis”, stressing out that “the whole life of Mikis Theodorakis is a symbol of unbroken resistance
to fascist dictatorship and exemplary services to the people of Greek
and his songs will be in the mouths of communists and revolutionaries
all over the world”.

The Communist Party of Turkey (TKP) expressed its condolences for the death of Mikis, pointing out in a letter addressed to the KKE:

“We heard with great sorrow of the
passing away of a great composer, musician, former KKE MP and a holder
of the Lenin Peace Prize, Mikis Theodorakis. Humanity has lost one of
its masters.

The great artist of our age Mikis
Theodorakis had wished to leave this world “as a communist”. He wanted
his comrades to bid him farewell. We convey our condolences to KKE, of
which he kept speaking highly even in his last days, to our comrades and
to the working people of Greece.

Mikis Theodorakis, who had been a part
of the struggle for socialism throughout his life and who always
supported the brotherhood of the peoples of Greece and Turkey will
continue his struggle by becoming a song in the mouths of communists and
revolutionaries all over the world. His works will be alive in our
communist struggle in Greece, in Turkey and all over the world!”

Mikis Theodorakis: I want to leave this world as a communist

Statement on the demise of Mikis Theodorakis