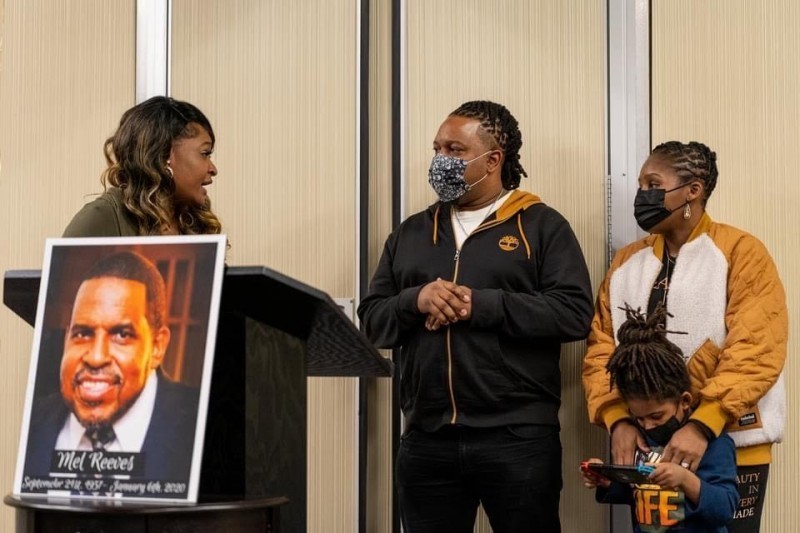 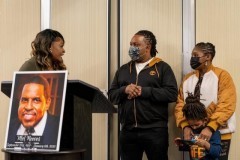 Minneapolis, MN – More than 50 people gathered here to honor Mel Reeves, a community leader who died January 6 at age 64. Organized by Families Supporting Families Against Police Violence, the event was a space for those who worked alongside him in community to share memories of a man who put in decades of work in struggles against racism and police violence, economic injustice and war and militarism. Reeves was a father and grandfather, and a journalist for the Black newspaper, the Minnesota Spokesman-Recorder.

Toshira Garraway Allen emceed the event and spoke about Reeves’ work supporting her organizing with families who have lost loved ones at the hands of police. Other speakers included Minnesota State Representative John Thompson, Mary Moriarty (former Hennepin County chief public defender now candidate for county attorney), activists who’ve worked with Reeves as far back as the 1990s, and countless young people who spoke about the time Reeves invested in youth, sharing history and political lessons, encouraging them to both study and organize. People praised Reeves’ optimism, his eloquence and his genuine love for people. Reeves’ son Kellen and daughter-in-law Michelle thanked community members for sharing these reflections.

Just a week before Reeves died from COVID complications, he was interviewed from his hospital bed, imploring community members to set aside their fears and get vaccinated. Because of complicating health concerns, Reeves had not been vaccinated against COVID. Even from his hospital bed, Reeves was writing. His final article was the cover story on the day he died, urging community members to protect themselves from COVID.

Reeves engaged in many struggles for social and economic justice in his life, but the fight for Black liberation was always at the forefront. Reflecting on 2021, he wrote, “The year felt long and stressful as yet again the problem of America’s color line aroused rancor and resentment across the land. This country’s continued refusal to grant its Black population the right to live fully as citizens in the land of their birth and the absolutely unconditional, unalienable right to life, liberty, and justice remains an obstacle to every American’s peace of mind. Yes, the year was long, but we endured, and with the spirit of our ancestors we look ahead, never satisfied to just endure but to endure until we overcome.”

A Celebration of Life service will take place on Thursday, January 13 at 4 p.m. at Shiloh Temple International Ministries, located at 1201 W Broadway Avenue in North Minneapolis, with a visitation at 3 p.m.

Kim Philby Remembered: A traitor to his class

Youth leader at National Day of Mourning: ‘We are not vanishing’