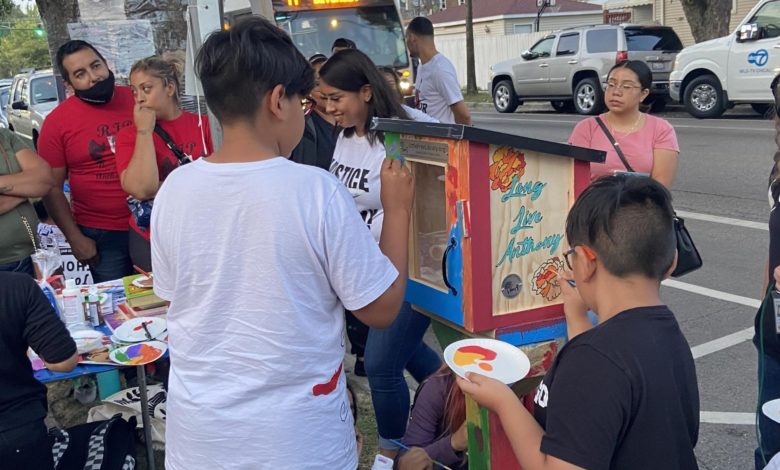 Six months after Anthony Alvarez’s killing by the Chicago Police Department, the community came together to unveil a “little library” at Alvarez’s memorial site, as well as hold a speak-out to demand justice and an end to police brutality. The event was organized by members of Alvarez’s family as well as the Party for Socialism and Liberation.

The unveiling was attended by Anthony’s friends and family, members of the community, and organizations such as People United Albany Park and the New Era Young Lords. The speak-out was open to anyone wishing to voice their thoughts. The unveiling came one day after Alvarez’s daughter’s third birthday.

Laly Figueroa, Alvarez’s cousin, explained the importance of the little library: “I hope this library stays strong. For the good of our children, their education is very important. Anthony left behind his three-year-old daughter. Anthony wasn’t given the opportunity to grow up with his father. And now the daughter doesn’t have the chance now to grow up with both of her parents, and be educated by them. So this [the little library] is a step to giving the kids the education they deserve,” she said.

Figuroa concluded her talk with the demand shared by all attending: “My family and I are still seeking justice. And justice for us means Evan Solano [the police officer who shot and killed Alvarez] gets arrested, and he gets charged for the murder of Anthony Alvarez.”

The event started with organizers from PSL and PUAP installing the little library in Chicago’s Portage Park neighborhood where Alvarez was killed. Organizers brought paint and brushes, and were shortly joined by children from the community to help paint the library.

Kamran Siddiqi, an organizer with PUAP, began the speak-out by reminding the crowd about the importance of staying united in the struggle for justice. “Because of our struggle, Evan Solano has been stripped of his police power and his ability to carry a gun as a civilian. This only happened because we fought back and refused to be intimidated,” he said.

Since Alvarez’s killing, the memorial site has been subject to constant attacks by the CPD, which has frequently had officers come and take down the memorial. Each time, it has been restored by the community. The family and community organizers have also been met with opposition from pro-police, pro-fascist aldermen, who unsuccessfully attempted to stage a counter-protest to the family’s demands for justice.

Throughout the speak-out, people driving by would honk in solidarity with the organizers and community. A few pedestrians also stopped to join the event and to learn about how to get involved, as well as learn more about Alvarez’s life.

After the speak-out, Candice Choo-Kang, an organizer with PUAP, did a reading of the Alexandra Penfold book “All Are Welcome” for the children present. The speak-out concluded with a now fully painted little library being filled with books by the community, including the children who helped paint it.