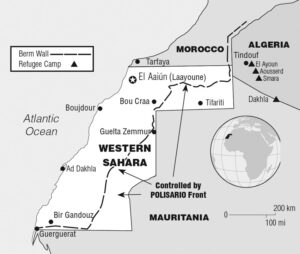 MALAGA, Spain — “Youth organizations from all over the world have come here to support freedom and independence for the people of Western Sahara,” Hamdi Aomar Taubali told a gathering of over 150 young people from around the world. “You have come to reject and condemn colonialism, occupation and crimes against humanity.”

Taubali is officer of international relations at UJSARIO, the youth wing of the Polisario Front, which leads the struggle of the Sahrawi people for independence. He was addressing the International Youth Forum of Solidarity With Western Sahara that took place here Nov. 26 -28.

“The youth of Western Sahara are fed up with the United Nations’ betrayal of its promises to organize a referendum for self-determination, and its tolerance of Moroccan violations of Sahrawi people’s rights,” he said.

For decades the people of Western Sahara have fought against the occupation of their land. Their struggle forced the Spanish rulers to relinquish control over Western Sahara in 1975. But the Moroccan regime then seized two-thirds of the country and the government of Mauritania grabbed the rest.

Polisario fighters continued their struggle, and by 1979 they defeated Mauritania’s armed forces. As they pulled out, Moroccan troops moved in to occupy all of Western Sahara. Some 9,000 people were killed over 16 years of war and many Sahrawis were forced to flee to refugee camps in southwestern Algeria.

In 1991 both sides agreed to a U.N.-brokered cease-fire. The agreement called for holding a referendum where Sahrawis could choose independence.

But the Moroccan monarchy has blocked all attempts to hold a vote. The government in Rabat relocated some 350,000 Moroccans to Western Sahara and insisted they be included in any referendum. Because of this, and the forced flight of refugees, Moroccans now make up two-thirds of Western Sahara’s population.

In November 2020 Moroccan armed forces entered a U.N.-patrolled demilitarized “buffer zone” in Guerguerat, in violation of the 1991 agreement. Their troops fired on Sahrawi protesters who were demanding a halt to the Moroccan government’s construction of a road through the buffer zone.

“For 29 years there was a tendency to deviate from the course of holding a referendum,” Oubi Bouchraya Bachir, Polisario representative to Europe and the European Union, told the conference, and “to consolidate Moroccan rule. When Morocco broke the cease-fire, we had to respond by exercising our legitimate right to self-defense.”

Bouchraya said the Polisario Front’s offensive has brought renewed international attention to the conditions faced by the people of Western Sahara.

This was reflected at the conference. It gathered representatives of 90 youth organizations from 53 countries. They hold a range of views, often sharply opposed, on other political questions. Many are members of the World Federation of Democratic Youth. Founded in 1945 by the Stalinist regime in the Soviet Union, it opened up to broader participation in the 1990s. Others came from  member organizations of the International Union of Socialist Youth, aligned with Social Democratic parties.

The UJSARIO is a member of both and has won support in recent decades through its participation in the World Festival of Youth and Students, which  is sponsored by the World Federation of Democratic Youth.

The conference was hosted by UJSARIO together with the Spanish Youth Council and the European-Latin American Youth Center, both of which are organized by the Spanish government.

Delegates included opponents of Belarusian President Alexander Lukashenko, who has brutally suppressed resistance to his regime. Also participating were representatives of Palestinian and Kurdish organizations.

Morocco emboldened by US support

The U.S. rulers are the main military backers of the regime in Rabat, supplying billions of dollars in arms, including F-16 jets and Apache attack helicopters.

The Moroccan government has been emboldened by Washington’s recognition in 2020 of Rabat’s sovereignty over Western Sahara, in exchange for the kingdom’s recognition of Israel.

In 2021 the U.S.-led “African Lion” military exercise, hosted annually by the Moroccan government, included for the first time staging maneuvers in Al Mahbes, an area in occupied Western Sahara.

At the solidarity forum, the Young Socialists in the U.K. condemned Washington’s and London’s backing of the Moroccan occupation. Despite the U.K. government’s stance that Western Sahara’s status is “undetermined,” London sent forces to participate in the military exercises.

A message to the conference from the Young Socialists in the U.S. “condemns the deal made last year between U.S. imperialism and Rabat to trade Washington’s recognition of Moroccan sovereignty over Western Sahara for the monarchy’s opening of diplomatic relations with Israel.” It noted that this in no way contradicted “our demand that governments throughout the Mideast and beyond recognize the right of Israel to exist — that question has been settled by history — and normalize relations.”

In the final conference declaration, participants pledged “unconditional support and solidarity to the legitimate struggle of the Sahrawi people for freedom, decolonization and independence,” and to make heard “voices of the people of Western Sahara in our respective organizations, countries and communities.”

For the immediate fulfilment of the right of the Sahrawi people to self-determination!