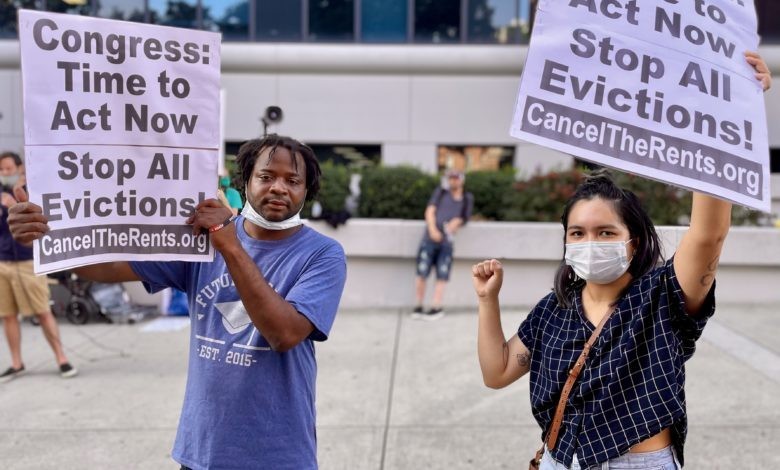 From Cancel the Rents

With less than 24 hours notice, Cancel the Rents called for emergency protest rallies that were held in 20+ cities across the United States August 27 in response to the decision by the Supreme Court to overturn the federal eviction moratorium. This outrageous ruling threatens to put 11 million people out onto the streets in the midst of a deadly resurgence of the pandemic.

These actions showed that the fight is not over, and demanded that Congress take immediate action to legislate an indefinite eviction moratorium that would cover 100% of the country. Such an act of Congress would be shielded from a legal challenge.

The Supreme Court ruling was issued in a particularly cowardly way. Using the “shadow docket” process, the court declined to even hold a full hearing on the matter and issued an expedited decision that was announced late at night. Clearly, the Supreme Court and the wealthy elite they represent are afraid of massive backlash from the people.

And the Supreme Court’s rationale was truly disgusting. “Preventing [landlords] from evicting tenants who breach their leases,” the Supreme Court wrote in its majority opinion, “intrudes on one of the most fundamental elements of property ownership—the right to exclude.” They were horrified that if they allowed the CDC-issued moratorium to stand then it would be a slippery slope to a “mandate [for] free grocery delivery to the homes of the sick or vulnerable”. The Supreme Court is perfectly happy to throw millions out into the streets to protect the all-important right to exclude. God forbid the government would feed the sick or vulnerable!

We will continue this struggle. 11 million evictions in the middle of a pandemic is a catastrophe that cannot be allowed to come to pass. Congress must return from their vacation to take emergency action against evictions now. And to ultimately resolve the housing crisis they must cancel the rents and mortgages by wiping clean all debt accumulated over the course of the pandemic.

Washington, D.C.: Activists gathered in front of the Supreme Court to express their outrage directly at the site where the horrific ruling took place. Despite inclement weather, a strong showing at the action attracted both local and national media attention.

Albany, New York: Community members came together in Albany, at the New York State Capitol to demand the cancelation of rents. Organizers spoke with Capitol staffers, lobbyists and small business owners about the needs of tenants during the pandemic and how critical a rent cancelation is to millions of families. The event then moved to Malcolm X Park, a park in the Arbor Hill community. Many tenants joined the action to get information about their rights and to find out how to get involved. One tenant explained, “I have been waiting for my ERAP (rental assistance) payment, and waiting is not enough. I want rent cancelation and stability for my family!”

Atlanta: Atlantans demanding a new eviction moratorium gathered downtown outside the Fulton County courthouse where evictions are processed. Housed and homeless alike rallied to defend housing as a basic human right. “Metro Atlanta governments have only disbursed 12% of federal rental assistance funds this whole time,” said one protester. “It’s not fair that millions of people are at risk of losing their homes due to the government’s inaction on multiple fronts.” Cancel the Rents, PSL Atlanta and Housing Justice League attended the action.

Albuquerque: An emergency protest was mobilized by Cancel the Rents, garnering coverage in local media. “We’re here to fight back and demand a cancellation of all rents, and mortgages, we want guaranteed housing for all. We believe housing is a human right. There’s a housing crisis in the United States before the pandemic and it has been exacerbated because of the pandemic,” said protester Bex Hampton.

Before the pandemic, between 2018-2019, New Mexico had the highest increase in homelessness in the country – an increase of 27%. 100,000 New Mexico households are at risk of eviction when the state’s moratorium is lifted. Despite the worsening housing crisis in Albuquerque, Mayor Tim Keller is pushing for 50 million dollars in public financing to build a stadium with the private corporation, New Mexico United Soccer Team. Housing rights activists are demanding money for housing, NOT a sports stadium, and urging people to vote no on November 2nd to using workers’ tax dollars for the stadium.

Bay Area/San Francisco: In San Francisco, protesters turned out at Powell and Market for a spirited speak out and rally which attracted media coverage from local TV station Channel 2 as well as passers-by who signed up to get involved. On Aug. 28 in Oakland, organizers with the Cancel the Rents campaign took to the streets in Snow Park. In the East Bay, there are over four times as many empty houses as there are homeless people as a massive wave of evictions approaches. But, with a mass movement of working people demanding the full cancellation of rent, this crisis can be averted. As Rosa from the Cancel the Rents campaign said, “We need to organize! We need to fight back! And we need to win housing justice for all!”

Boston: Cancel the Rents activists rallied August 28 at Nubian Square. Cancel the Rents Boston organizer Jack said, “This country is looking at up to $60 billion in renters debt from this crisis. $60 billion is 8% of the Pentagon Budget. The government paying off all of the rent debt would be just a small fraction of the money we spend on war. Why does our government have all this money for invading other nations, but no money for the basic needs of the hard working people of this country? Why does every president make room in the budget to drop bombs on innocent civilians, hospitals, and schools in Afghanistan, but can’t make room in the budget to keep families housed during a global pandemic?”

Geneva, New York: Housing rights advocates in the Finger Lakes gathered in Geneva to shout: “One, two, three, four, Down with the Supreme Court” in response to the court’s siding with landlords against working class renters. Participant Leslie explained why she was speaking out: “My family and I are currently in the process of being evicted and this has happened to us before. Landlords won’t fix what needs to be fixed and the rent is too high. They expect rent on the first of the month but spend the rest of the month neglecting what needs to be done. We don’t expect to live in an apartment for free. But the virus hit our family hard. We wanted peopled to be more understanding. My mom has a disability and me and my brother are both under 18.”

Los Angeles: Members and representatives of Cancel the Rents, ANSWER Coalition Los Angeles and the Party for Socialism and Liberation L.A. gathered in front of L.A. City Hall. Cancel the Rents organizer, Thomas Zenteno spoke and led the crowd in chants of “Housing is a Human Right,” and “Cancel the Rents!”

Philadelphia: Protesters rallied at City Hall as part the emergency national day of action. The demonstration received extensive coverage from local media outlets. The action was supported by Cancel the Rents, PSL Philadelphia, Put People First! PA, Black Alliance for Peace, and the Philadelphia Liberation Center. In addition to demanding federal action by Congress to freeze evictions indefinitely and cancel the rents, demonstrators called on local authorities to dramatically speed up the distribution of renter assistance funds that have already been allocated.

Seattle: Protesters from Cancel the Rents, PSL and the Seattle Cancel the Rents Coalition gathered at the busy Pike and Broadway intersection for picket and speak out. Passers-by stopped and shared their experiences with getting behind on rent during the pandemic and applying for emergency rental aid.