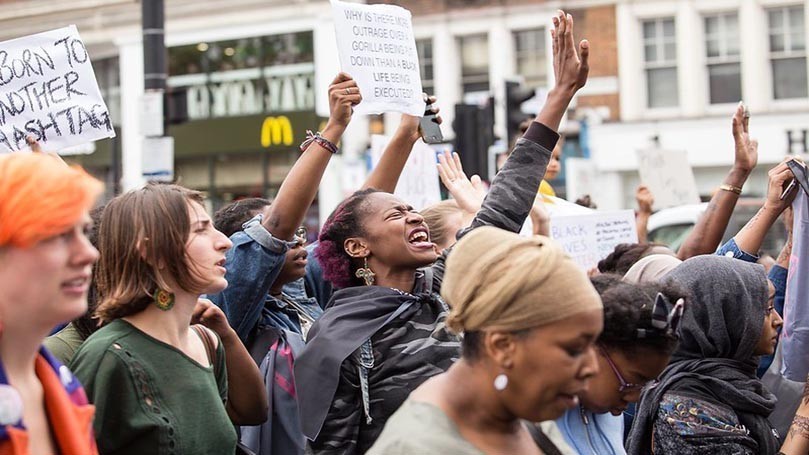 Much depends on the outcome of the debate now raging in Washington on the infrastructure and $3.5 trillion economic and environment legislative packages. One thing is sure: whatever the result of current negotiations, the discussion would not even have been possible but for the mass anti-racist and ultimately anti-fascist democratic uprisings of 2020. The country owes a debt of gratitude to the tens of millions of African Americans, Latinos, Asians, and their white counterparts who after the murders of George Floyd and Breonna Taylor marched from the streets to the ballot box in November to defeat Trump and his coup-plotting confederates.

Anti-black along with anti-immigrant racism were at the center of the Trumpian counter revolt so vividly symbolized by the attempt to hoist the confederate flag atop the Capitol dome on January 6th. For this reason, what was true in 1865 remains even truer today: anti-racism remains at the center of resolving the crisis.

But in what does “anti-racism” consist, and will the Biden-Harris administration find the will along with the material, moral, and political capital to meet the challenge? Answering this question is at the heart of the current Congressional wrangles between centrist and “left”-liberal factions in DC.

In some respects, the atmosphere remains favorable.

Today public sentiment for the freedom movement’s equality goals remains widespread, particularly among communities of color. “When asked about the Black Lives Matter movement, 83 percent of Black Americans surveyed espoused some level of support, with 58 percent saying they ‘strongly’ backed the cause. Overall support was slightly lower among Hispanic and Asian respondents — 60 percent and 68 percent, respectively.”

Support among whites hovers at near half: “47 percent of white respondents said they either ‘strongly’ or ‘somewhat’ supported the resurgent movement.”

Countrywide, majority approval of measures to address efforts at reining in racist policing apparently failed to convince right-wing opposition, as evidenced by last week’s collapse of Senate negotiations to enact barely minimal reforms. GOP opposition to the George Floyd Justice in Policing Act, of course, extends to nearly the entire Democratic agenda, including raising the debt ceiling on bills accrued during Trump’s time in office.

Politics cannot be left in the hands of politicians.

Clearly, meaningful measures like Chicago’s recent creation of the Community Commission for Public Safety and Accountability will have to come from the ground up. By combining door-to-door grassroots organizing, street protests, and electoral activism, the Chicago movement led by groups like the National Alliance Against Racism and Political Repression was able to build a united front on issues with wide public support from unions, community, and religious groups. The lesson of the Chicago anti-police violence movement is that politics cannot be left in the hands of politicians — the people must take hold of and exercise power.

Not surprisingly, consensus on goals remains elusive inside and outside the democratic camp among moderates, liberals, the left, and the sometimes hard-to-define independents. The compromise infrastructure proposal in the Senate, put forward by Mr. Manchin, removed several hundred billions of dollars’ worth of measures aimed at Black and Latino communities. “Measures . . .  to address historic inequities were cut as part of a bipartisan deal backed by the president — among them, a $20bn initiative to rectify the damage caused decades ago by highway construction in Black and Latino communities was reduced to just $1bn. The plan also scrapped a $400bn proposal to improve long-term care for older and disabled Americans. The program would have helped lift wages for care workers, who are predominantly women of color.”

On top of this, efforts to pass voting rights remain stalled. According to reports, the chance of legislation passing was so remote that even Majority Leader Chuck Schumer was reluctant to schedule the bill named for John Lewis for a vote, until being convinced by a massive online lobbying effort. The same fate applies to the all-important PRO-ACT and Family Act legislation, all of which hinge on changing or eliminating the Senate’s filibuster.

The Biden-Harris administration itself has faced sharp criticism on the voting rights issue. Several speakers at a rather poorly attended August 28th Voting Rights march in DC questioned the president’s willingness to put muscle behind the John Lewis bill and other initiatives.

Legal setbacks also complicate the picture. Courts ruled against efforts to forgive debt held by Black farmers, and the Supreme Court in August forbade efforts to extend eviction moratoriums after a sit-in on the Capitol steps led by Rep. Cori Bush of St. Louis. A path to citizenship was another casualty of the Congressional parliamentarian’s ruling to disallow immigration reform in the budget reconciliation process.

Addressing the racist wage differential would be a step toward real equality.

Important steps have been taken in other areas, most notably the child tax credit that aims to cut family poverty rates in half. With respect to economic measures, at this stage increasing the minimum wage to $15 would make the single biggest contribution to working-class black and brown families.  Addressing the racist wage differential which has grown steady since the turn of the century, of course, would  be a step toward real equality.

A growing factor is the administration’s civil rights missteps, particularly with regard to the border crisis with Haitian migrant workers in Texas, several hundred of whom were unceremoniously shipped back to Haiti without even a hearing, to say nothing of their brutal treatment at the hands of border patrol agents on horseback. Several thousand have now been returned as the Biden administration continues to enforce policies developed by Trump.

These actions recently prompted a response from Al Sharpton, who recalled to the Washington Post last week that, after winning the election, Biden declared, “Black America, you had my back, I’ll have yours.” Sharpton continued, “Well, we’re being stabbed in the back, Mr. President. We need you to stop the stabbing — from Haiti to Harlem.”

Public responses to the administration’s important mask mandates have also met with mixed reactions in various quarters. Confidence in Biden’s COVID messaging now stands at just under 50 percent for the first time. Here high opposition among GOP cohorts and drops in support among sections of independents are the main factors.

With the midterms just a little over a year away, erosion among other constituencies could prove problematic.  Support, for example, among African Americans for the president’s and vice-president’s job performance, while remaining very strong at 71 percent, has dropped by five points since the federal mask mandate for federal workers was implemented. African Americans are disproportionately represented among public workers generally.  On the other hand, vaccination rates among Blacks have increased significantly with some 70 percent now having receiving the shot.

While it’s hard at this stage to predict a direct correlation between these factors and possible voter turnout, the 2016 election demonstrated that small drops among people of color and women could prove decisive in determining who controls the House and Senate. Indeed even in 2020 despite the several million strong popular vote victory, Democrats won the Electoral College by only some 77,000 votes in several swing states.

The immigration crisis is in its very essence a crisis of imperialism.

The broader implications of Biden’s foreign policy, particularly the Cold War tones directed at China and other countries, are also of grave concern, given the spate of anti-Asian violence in 2020. Hate crimes are at their highest levels in years.  Yesterday it was China, today Haiti, tomorrow Bolivia, Venezuela, or Cuba and ever present are Somalia, the Middle East, and/or Russia.  And let’s not forget Mexico.  Here the immigration crisis is in its very essence a crisis of imperialism and its drive to lower the price of labor.

It’s often forgotten that as much as racial hatred is a willful subjective enterprise, it is also an objective process built into the very structure of the economy itself. Both work in tandem, spinning out ever more vicious and crude forms of hatred, violence, and militarism. Speaking of militarism, the House last week passed a bipartisan $768 billion defense bill, adding $25 billion to the president’s defense budget.

The military/industrial/financial complex is an immensely powerful force in and of itself, and it demands to be fed. The Democratic caucus split down the middle on the issue, with half joining the GOP. Taken as a whole, the increase will be the largest in 8 years, outpacing even Trump’s military budget.

In the face of all this, most worrisome at this stage is an apparent crisis of inaction with regard to the current bills before Congress. With scores of voter suppression legislation before state governments across the country, the mass democratic movement did not meet the political moment at the poorly attended but militant August 28th Voting Rights march. The question looms large: Why was the turnout so small in light of the challenge?

Was fear of COVID’s Delta variant the reason? Or is the country experiencing a return to post-2009 delusion, when Obama’s election along with Democratic majorities in the House and Senate lulled folks into a false sense of confidence? Or have the powers-that-be warned allies away from mass protests, for fear of alienating centrist forces?

The leverage sought by the people’s representatives in Congress lies in the streets, factories, and campuses.

It’s a truism that left-center unity hinges on the most advanced positions of the political center. But such positions are not frozen in time.  Needless to say, the issue is what will it take to move them?   Unity is not a static thing to be achieved in back rooms while negotiating on high. The progressive members of Congress who take admirable positions need to hear the shouts of masses cheering them on. In fact, everyone needs to hear it. The leverage sought by the people’s representatives in Congress lies in the streets, factories, and campuses — it must be organized.

Here, the upcoming women’s marches across the country on October 2nd will be an important test. Of course, there are ebbs and flows in any mass movement — and permanent states of mobilization are hardly realistic. On the other hand, the democratic and working-class movement has many streams with considerable resources, some of whom should be expected to step up. Civil rights and other oppressed communities require their allies in labor and other movements to initiate and enjoin the struggle as well — not to do so could invite disaster.

As Frederick Douglass said many years ago, “Power concedes nothing without demand. It never has and it never will.” It’s time to put on our marching shoes, yes. But more is needed. Much more. The time is way past due for a massive, militant, in-your-face, uncompromising fightback, including strikes, occupations, boycotts, etc. And this requires a larger, bolder, and more revolutionary Communist Party fighting tooth-and-nail working with allies and building united fronts on issues.