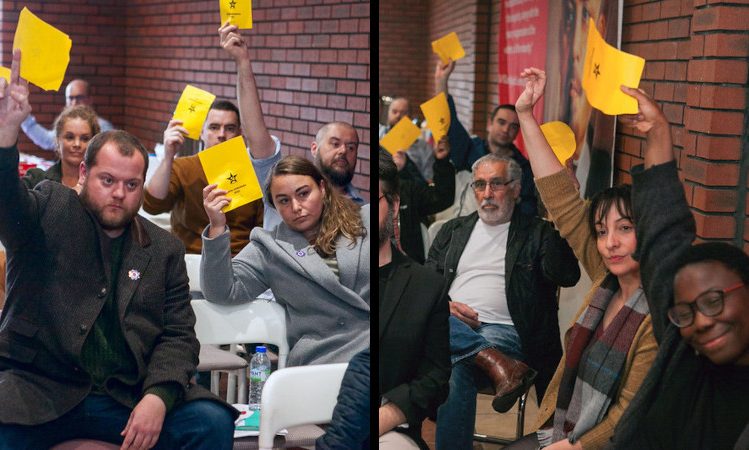 The following resolution was carried overwhelmingly at our party’s ninth congress in October.

This congress notes that in the constant expansion of our practical work, and with our growing ambitions as a small organisation, it can be easy for our comrades to become overwhelmed and bogged down in day-to-day tasks that all feel extremely urgent, although in the grand scheme of things, they may not actually be very important.

This feeling can be exacerbated by the conditions in which most of us work: spread out, relatively isolated, working on different timetables and fitting our party duties around paid work, caring responsibilities, etc.

This congress believes that the fundamental principle that should guide us in deciding what to focus our time and energy on should be our mission to connect Marxism with the masses. As Marx wrote in 1844: “theory becomes a material force as soon as it has gripped the masses”. It is only when the masses have gripped the science of socialism and learned to use it that revolutionary change in Britain will be possible.

This congress affirms that, as communists, it is our responsibility to make sure we have this mission at the centre of everything we do; that we can see how the work we are doing will help us to achieve this goal.

To this end, congress resolves that all communist cadres should make sure they are:

1. Prioritising personal and group study of Marxist classic texts, for we cannot presume to educate others if we are uneducated ourselves. The classics of Marxism are not something to be picked and chosen from but to be mastered as a whole by regular and frequent study.

Every member should work their way systematically through the party’s core education programme not once but many times, and supplement this core study with further reading of the works of Marx, Engels, Lenin and Stalin in particular, which are a treasure trove of scientific socialism and of revolutionary experience.

All our supplementary reading should be in addition to and not instead of this core study programme.

2. Making sure that our key messages to the working class are being promoted in all our practical work:

a. that there is a class war going on and workers need independent organisation and maximum unity to defend themselves and fight for their interests;
b. that the Labour party is a capitalist-imperialist party;
c. that Labour and Tory alike are the enemy of the working class and that bourgeois politicians of all stripes serve the ruling class;
d. that the drive to war is not in workers’ interests;
e. that capitalism is the root cause of crisis, inequality, poverty, degradation, monopoly and war;
f. that the capitalist state is a weapon in the hands of a hostile class; and that only planned production can solve the problems that face humanity.

Prioritising important work is the best way to see consistent and real results over time. Prioritising urgent busy-work will drain our comrades’ energy but is unlikely to move us any closer to socialism.

The Horgan government’s priority must be public health, not corporate profits

In these days of great tension, peace is a priority: The Ninth Newsletter (2022)

Sudan: march of millions meets the whip of reaction – the masses must fight back!

Ninth party congress: We must connect our movement with the masses