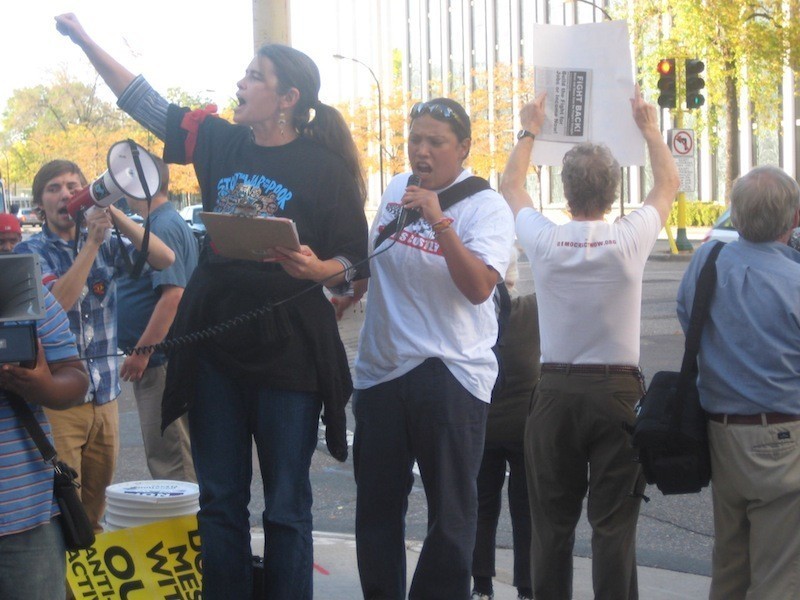 On September 24, 2010 the FBI raided seven homes of anti-war activists and the office of the Twin Cities Anti-War Committee. 23 activists were subpoenaed to a Chicago-based grand jury that claimed to be investigating “material support for terrorism.” None of those targeted ever stopped resisting this attempt to repress our movement and no one appeared before any grand jury. As time went on, the FBI continued their attack on anti-war and international solidarity activists by targeting important veterans of the movement who worked with the Anti-war 23, including Chicano activist Carlos Montes in Los Angeles and Palestinian organizer Rasmea Odeh in Chicago. Veterans of our movements showed solidarity with the other activists targeted by the FBI and helped push back against this attempt at repression.

Over 11 years later, the FBI and local law enforcement continue their attempts to repress the people’s movements. Anybody who watched or participated in the nationwide rebellion after the police murdered George Floyd in Minneapolis could attest to that. Rather than bowing to the police and the wealthy elite they protect, the masses burned the 3rd Precinct police station to the ground in Minneapolis. Protests and demonstrations continued around the country, despite the best efforts of the enemy to stop and slow them down. Millions of people participated in these actions, calling for justice and an end to police crimes.

The enemy is not going to stop trying to repress our movements. The broad masses of people in this country are not going to stop fighting for justice. It is important to realize that this contradiction is unavoidable and in fact demonstrates that the wealthy elite who rule this country are scared of the people’s movements. These movements represent a real challenge to the enemy’s system. There are several important lessons we can draw from the experiences of our struggles as we continue to build and advance forward in the face of repression.

One important lesson is the key role that solidarity among activists and their communities, both locally and nationally, played in keeping momentum going and not allowing the enemy to achieve its goals. Without the unbreakable showing of solidarity shown both among the Anti-war 23 and veteran activists and the solidarity shown towards them by activists all over the world, many of our movement leaders would have ended up behind bars. Instead, they continue to organize in the streets and participate in important events like the George Floyd rebellion. If there are key lessons to learn from this showing of solidarity among activists, those lessons are: Don’t talk to the FBI or any law enforcement. You are only required to give your name, but then tell them to contact your lawyer and say nothing.

Our movements must firmly oppose the different methods of oppression used against us, including grand juries and “material support for terrorism” laws. Grand juries are in no way fair and involve the prosecutor asking you questions without your lawyer present. It is important not to talk to grand juries at all and not attend them. Resistance is key to fighting back against this terrible one-sided system. Grand juries are also sometimes used to let killer cops off the hook, and should be abolished entirely.

Likewise, bogus “material support for terrorism” laws are used to strangle free speech and to lock people up. Over the past decade, these laws have specifically targeted many important social movements, especially Arab and Muslim organizations like the Holy Land Foundation, a charity whose only focus was helping the less fortunate. Often the enemy will plant agents and informants into our movements with the goal of framing people using “material support” laws. We’ve seen this many times within movements that fight for Black liberation. It also happened back in 2008 when the enemy planted a spy named “Karen Sullivan” into efforts to organize a demonstration against the 2008 Republican National Convention in Minnesota. This spy was directly involved in the FBI raids of the Anti-war 23 in 2010.

Freedom Road Socialist Organization commends everyone who resists repression and urges every member of our social movements to continue organizing for a better world. The billionaires who run this system and leave poverty and destruction in their wake have got to go. Their system must be replaced by a society run by the working class and their allies, including the Black, Chicano, and Hawai’ian nations currently being oppressed. Together we can build a better world.

Organize to win! Don’t speak to the FBI or police. Refuse to testify at any grand jury.