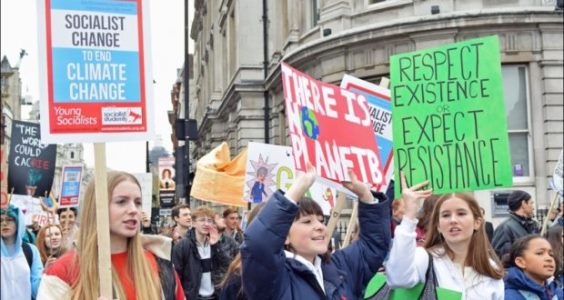 The COP 26 UN climate summit in Glasgow is now only a month away. Over 30,000 official participants, including US president Biden, UK prime minister Johnson, president Macron of France and a legion of elite politicians, lobbyists, big business, including fossil fuel industry, representatives, charities and NGO’s, as well as the capitalist media, will attend.

No expense is being spared including, ironically, an enormous amount of carbon emissions produced by private jets to fly in the elite.

Capitalist leaders are busy making speeches about their concern for the planet, Boris Johnson included. But they all defend the economic system of profit that is responsible for climate destruction in the first place.

Meanwhile, working class and young people in Glasgow, Scotland and internationally coming to protest at COP26 will face an exclusion zone around the conference venue by the Clyde where protestors will be kept away by state forces including armed police. This was agreed by not just the Tory UK government but the Scottish government, as well.

The right to protest must be defended at COP26 in Glasgow and at climate events internationally.

For the climate movement, the task should be to expose COP26 as an attempt at “greenwashing” capitalism. Talk of a “just transition” and a “green new deal” means little in practice if the same big business polluters are let off the hook.

An effective mass protest movement, including building for walkouts from schools and colleges, and strike action by workers during the course of the summit, is essential.

Putting forward a sustainable alternative to capitalist production methods – the root cause of global warming – means fighting for socialism.

How can this be done? What are the most effective methods and slogans to achieve a mass movement and force our demands onto the agenda?

It is not just Socialist Party Scotland, the Socialist Party (England & Wales) and the Committee for a Workers’ International (CWI) raising these questions. They will be in the minds of thousands of workers and youth looking to protest and force real change at the summit.

The recent international climate strike in September was called under the radical slogan “uproot the system”.

We completely agree that the capitalist system must be “uprooted”.  Yet most of the left in the strikes have limited themselves to the slogan of “system change”.

The concrete question is what system will replace the capitalist system? The capitalists short term utter reliance on profit is not capable of implementing any “just transition” to an economy that will end environmental destruction.

Socialist Party Scotland, the Socialist Party (England & Wales) and the CWI have raised the slogan “socialist change to end climate change” at the climate strikes and will do at COP26, as well.

A socialist transition would see the skills of workers in the fossil fuel industries utilised in the renewable energy sector, as part of a socialist plan based on meeting the needs of the majority in society.

We believe this programme has the potential to reach much wider layers of society, including the vital task of mobilising the most powerful force in society, the organised working class, which is capable of halting production and thereby the bosses profits.

Unfortunately, the recent climate strikes attracted far smaller numbers in Britain and Scotland than the tens of thousands of mainly school students who were mobilised in 2019.

Also, the COP 26 coalition, which has appointed itself the main organiser of the protests in November, has wrongly changed its approach to mobilising for Glasgow.

In early summer, it was calling for a full turnout internationally to Glasgow. But now, citing the continued pandemic and also the exclusionary nature of COP26 itself, it is wrongly calling for “decentralised mass mobilisations”.

Local protests are now being called by the coalition and other groups and the numbers coming to Glasgow are being effectively demobilised.

While the pandemic has had an understandable effect on the movement this is not the main reason.

The numbers at the recent climate strike in Glasgow, of around 300, contrasts quite dramatically with the scale of the BLM protests that drew thousands in Glasgow in the summer of 2020.

The BLM movement was despite lockdown and the attempts of politicians, including the SNP and the Greens, to actively discourage youth from protesting.

If the organisational resources of the workers’ movement, environmental groups and students unions were effectively mobilised it would be perfectly possible to build a mass turnout for protests in Glasgow for COP26 across the UK and internationally.

The recent examples of environmental destruction over the summer can feed into a fighting mood. But the retreat from maximising the turnout for Glasgow was done without any real democratic discussion and clearly had a disorientating effect on the strike on the 24th of September.

A Socialist Party Scotland representative attended the COP26 coalition online zoom meeting on the 13th of September which attracted hundreds of activists. Unfortunately, the meeting was organised in a top-down manner with selected speakers reporting on decisions that seemed to have already been made about climate protests being “decentralised” away from Glasgow. Attendees could only comment using the chat function.

One reason given for the decentralisation was that official summit participants and activists from the neo-colonial world were being excluded from being able to travel to Glasgow because of the low vaccination rates in their countries preventing them from obtaining visas.

It was even reported that a section of the coalition had argued for boycotting the summit completely without any protests. The UN has no intention of cancelling the summit and such a boycott would have severely weakened the climate movement and allowed the capitalist governments to “greenwash” unchallenged.

The correct strategy is to go for the biggest mobilisation possible for Glasgow while putting out an international call for simultaneous mass action of workers and youth who were not able to attend.

The political weakness of the COP 26 coalition, which includes pro-capitalist politicians and NGO’s, is evident in this retreat.

A central COP 26 coalition slogan for Glasgow is “rewire the system”. This is part of a trend towards reinforcing illusions that the existing capitalist system, based on private ownership of the means of production for profit, can be altered and reformed to save the planet.

With energy giants sponsoring and lobbying the summit, capitalist greenwashing is a concrete issue.

Fundamentally, the interests of workers, young people and the majority of the planet’s population are diametrically opposed to the interests of the corporations. To say their grip on the economy can be rewired is utterly utopian and can only weaken the climate movement.

Many of the leading politicians of the Green parties internationally defend capitalism and participate in governments that attack the working class and the poor.

The Scottish Greens have joined a coalition government with the Scottish National Party, a party tied historically to big oil. In the Republic of Ireland, the Greens are coalition partners in a vicious anti-working class government.

It looks most likely that in Germany the Greens will be part of the new ruling government that will seek to make the working class pay for the crisis of capitalism – as they have done in Germany in the past.

Scottish Green MSPs recently voted against an extremely limited proposal from Scottish Labour for a public energy company. Nowhere in the SNP-Green programme for government is there any mention of nationalisation of the energy sector or even any wealth tax on the big polluters.

The SNP and Greens, despite planning to place Scotland’s railways under state ownership, are cutting rail workers’ jobs and hundreds of rail services, bringing them into conflict with the trade unions.

There was no mention by the COP26 coalition of the need to support and link up with the struggle of workers who may be on strike during the summit, including Scotrail workers and council workers.

Demands for the nationalisation of the energy sector would have mass appeal with the ongoing crisis in the supply of fuel, and with millions of working class people worried about how they are going to pay rising bills.

In Glasgow, currently, the trade unions and local residents are in conflict with the SNP council (whose budgets are supported by the Greens) over a mounting waste crisis caused by decades of cuts to cleansing.

This shows the need not just to expose the greenwashing of Biden, Boris, Macron and the other international capitalist politicians but also that of the Green parties and the Scottish government.

Unfortunately, the actions of some environmental groups, such as XR, who have disrupted transport networks (which are also planned for Glasgow), can have had the opposite effect. There is a real danger that workers can become alienated from the climate movement unless it fights under a programme that puts working class interests centre stage.

Groups like XR and Insulate Britain substitute activity of small groups for what is actually needed; mass working class action, including mass demos, strikes, walkouts and occupations to confront capitalism.

A fighting democratic network of school, college and university committees, with an elected leadership mobilising the full potential power of the movement, can be a more effective tool than the top-down approach of many of the COP26 coalition.

This would have to be linked to bringing to bear the power of the trade unions to halt capitalist production. This should be linked to the building of new mass workers’ parties to help lead the struggle for socialist change.

A mass movement around COP 26 that delivered youth strikes and walkouts could not just expose the climate wreckers but could demand a massive publicly funded job creation programme to solve the threat of unemployment.

Demands for a sustainable council house building programme and a worker-controlled socialist transition that protected jobs and wages for workers in the energy sector would be capable of galvanising much wider support from the working class.

COP 26 is still likely to mobilise tens of thousands to Glasgow to protest.

As well as the mass demonstration on the 6th November in Glasgow, we are calling for walkouts against the climate wreckers from every school and college on Friday 5th November.

We have distributed thousands of leaflets with these demands around universities, colleges and schools.

Socialist Party Scotland and the Committee for a Workers’ International will ensure that the banner of Socialist Change to end Climate Change is to the fore in Glasgow in November.

We are also helping to organise the National Shop Stewards Network forum during the summit to put the issue of a workers’ transition based on public ownership and workers’ control on the agenda.

We will also be putting centre stage the need to build new mass workers’ parties to fight capitalist destruction with the trade unions playing a key role in their formation.

The Scottish Trade Unionist and Socialist Coalition are preparing to challenge pro cuts politicians in the Scottish council elections in 2022. Come to the Scottish TUSC meetings on October 20/21.

How Cuba’s working people made a socialist revolution