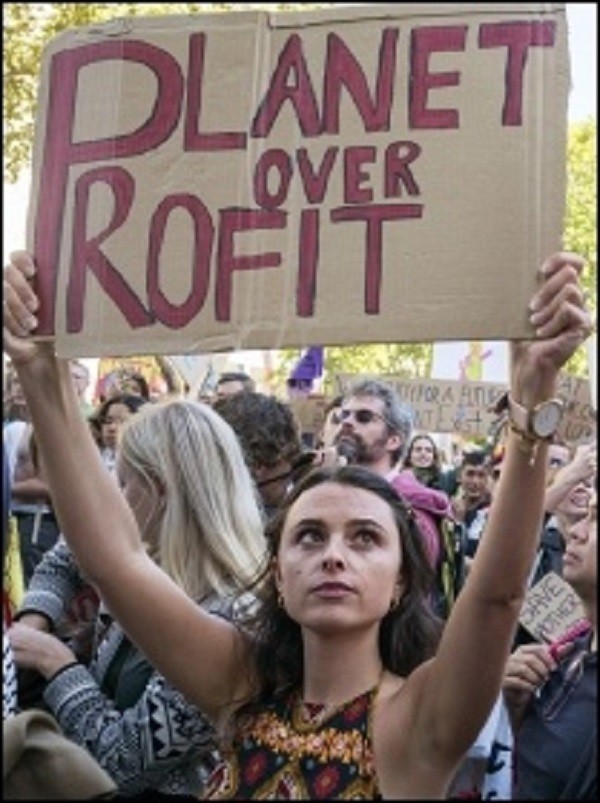 The world leaders, including Boris Johnson and Joe Biden, will arrive at the COP26 climate conference starting on 31 October in their polluting private jets, to talk about how we must do more to prevent climate change. Then they will return home, to continue to defend the mass-polluting, profiteering system that is capitalism.

Those most affected by the effects of the climate crisis, facing natural disasters, toxic air quality, rising sea levels and flooding, are among the world’s poorest. They will not be represented at COP26.

Those responsible for 71% of the world’s emissions – just 100 of the world’s biggest companies – have their representatives in form of the capitalist politicians. Other big-business big-polluters have chosen to sponsor the event. These include Microsoft, Unilever, NatWest and Hitachi.

A recent report by the International Energy Agency suggests that $4 trillion needs to be invested over the next decade to reach ‘net zero’. But unable to see a profitable return, capitalists have proven that they are unprepared to invest what is needed.

That’s why the Socialist Party will be protesting during COP26, raising the slogan “Socialist change to end climate change”. We put forward a socialist programme to change this society that uses the huge wealth that exists to put an end to, and help to reverse, the climate crisis while protecting jobs, pay and conditions, and transforming the lives of the working class.

In 2019, climate strikes erupted globally as young people took to the streets, with huge public support. The Socialist Party will be joining the protests against COP26, and mobilising support from the trade unions. We understand that the working class, when organised, is the most powerful force in society – by taking mass action in the form of strikes and occupations it can bring society to a standstill.

Capitalism cannot tackle the climate crisis because it puts profits before all else. It is only with a socialist programme that takes the world’s resources and production into public ownership, to be run under democratic workers’ control and management, that we can end climate change and save the planet.

The CWI relies on the donations from working class people around the world to fund our campaigns.Please donate towards building the CWI.