Cop26 set to end as failure 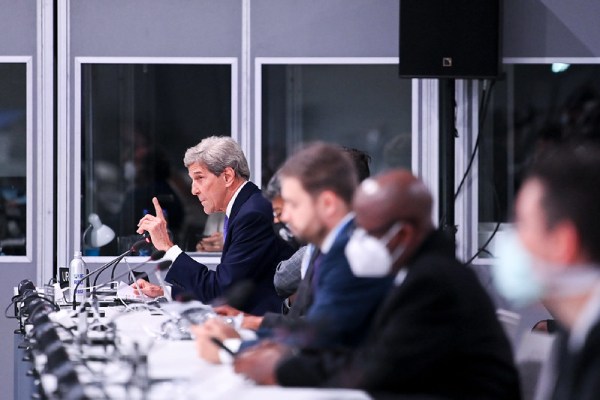 US climate envoy John Kerry at Cop26. The US and China made a ‘deal’ at the conference – but it promised very little (Pic: Cop26)

The Cop26 climate conference is expected to run into “extra time” as world leaders squabble over already inadequate climate promises.

According to research released by the tracking group Climate Action, temperatures will soar to devastating levels with the current pledges in place.

The group estimated that temperatures will rise by 2.4 degrees by 2100 if world leaders stick to their deadly plans. That’s way short of the target to limit heating to 1.5 degrees, as set out by the Paris Agreement in 2016.

The only way to reduce temperature rises is to stop burning fossil fuels. But only a tiny number of countries at Cop26 pledged to decrease their reliance on oil and gas.

Countries including France, Sweden, Greenland, Ireland, Costa Rica and Denmark all signed a pledge to reduce their reliance on oil and gas. Britain refused.

On Wednesday just 24 countries signed up to a supposedly ground breaking pledge to end the sale of new cars and vans that run on petrol and diesel by 2040.

“For us, it is not only about setting goals and reaching targets” said Hosung Song, president and CEO of Kia. “It is about setting a vision that will inspire others to join the movement to benefit humanity and protect the environment.”

And 18 countries signed up to the Clydebank agreement this week which aims to establish “green” shipping corridors.

Currently, the maritime shipping sector is accountable for between 2.5 and three percent of worldwide CO2 emissions.

Governments pledged to invest in technology to develop “green ships” and make ports more environmentally friendly. But the plans would only see 200 “green ships” in use by 2030.

A collection of 12 governments pledged over £300 million in new finance to some of the poorest countries to achieve net zero carbon emissions.

Yet this is nowhere near enough. A report by the United Nations last week said developing countries will need £224 billion a year by 2030—and as much as £373 billion by 2050.

Yet rich countries have between them failed to stump up even the £75 billion a year by 2020 that they at the Cop summit in Copenhagen 12 years ago.

They say they agree to cut down coal use and reduce deforestation and methane emissions—but haven’t yet said how. All they have actually agreed to do is to “meet regularly to address the climate crisis”—in other words, the deal promises more talks but no action.

Even those hailing the agreement had to admit it promised nothing concrete.

Cop26, negotiators are now busy deciding on the overarching statement from the conference or the “cover decision”.

Drafts of this decision have been delayed due to disagreements about what it should contain.

The main disagreement is whether the phasing of fossil fuels should be part of the cover decision.

Oil and gas corporations are desperate to keep any mention of fossil fuels out of the decision.

After heralding Cop26 as the conference that could save the planet, the meeting has ended up being a complete failure.

The failure of Marcuse, Adorno, and Horkheimer

Statement on the COP26 protest