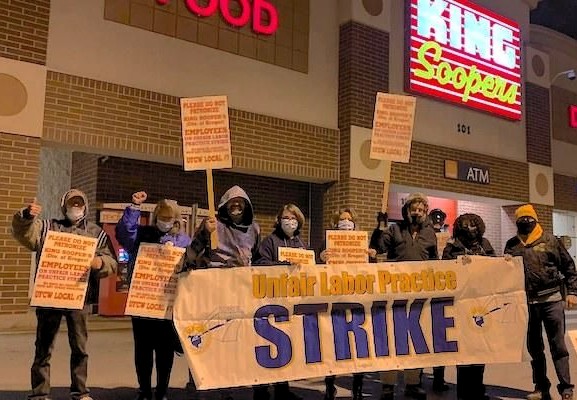 A temporary restraining order issued Jan. 19 by Denver District Court will restrict King Soopers strikers’ picketing and curtail their freedom of speech. The restrictions include no more than 10 strikers around the entire property of the King Soopers stores and no blocking of the entrances. King Soopers is a supermarket brand of the retail giant Kroger.

The company falsely complained that strikers were threatening, cursing and blocking scabs and shoppers.

Kim Cordova, president of the United Food and Commercial Workers Local 7, said the claims were unfounded. This writer saw strikers politely asking people not to cross the picket line, but they did not stop anyone who needed a prescription, according to Mary, an older person who supported the strike and needed her medicine.

During the past week many people from the community have brought food and money to the strikers and have joined the picket line in support. Striking workers say the company wants to stop community support. Over 8,000 workers in Colorado and Wyoming stores are on strike after overwhelmingly voting down the company’s last offer, which was only 13 cents more than the minimum starting wage of $15.87 an hour.

Other objections are over Unfair Labor Practices, including use of nonunion workers for union work yet maintaining irregular part-time hours for union workers. Over 60% of workers are part-time employees, and it takes years to apply for full-time positions, according to one worker.

A recent study of 10,000 Kroger employees in California, Colorado and Washington state by a nonprofit research group showed 14% have been houseless in the last year and 30% have been “food insecure.” (In These Times, Jan. 11)

The dire situation of grocery workers, who have risked their lives and health to serve their community during this pandemic, and the company’s bullying tactics and refusal to bargain are patently unfair, according to Cordova.

The majority of King Soopers store parking lots are very empty. Shelves are emptying as deliveries stop. The UFCW plans to appeal the court order.