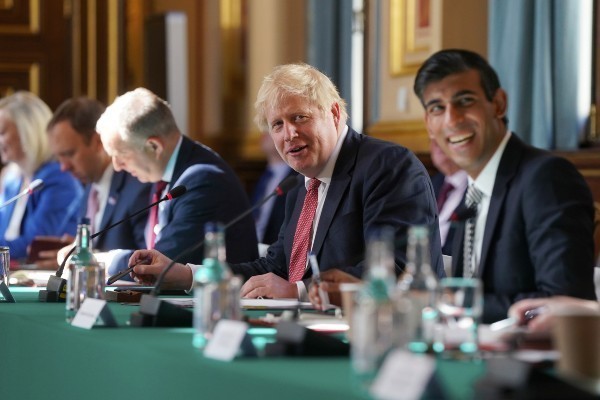 The Tories have gambled with our lives (Pic: Number 10 (Flickr))

Boris Johnson took a massive gamble in the run up to New Year—and he used our lives as his stake.

Under pressure from the Tory right to refuse any additional Omicron safety measures, the embattled prime minister decided the rebels were more of a threat than the NHS being overrun by Covid.

As evidence grew of Omicron’s terrible ability to infect even the vaccinated, the government announced only the mildest of restrictions in England.

And it even cut the time people with Covid have to self-isolate from ten to seven days—increasing the risk of people spreading the infection.

Now the price of Johnson’s wager is clear. Infection figures are through the roof, and millions are unable to work as a result. The government this week told public sector bosses to prepare for having up to a quarter of staff off work with Covid.

Health and social care bosses already report there are so many absences that conditions are routinely unsafe.

According to the Sunday Times newspaper some 40,325 health workers were off work sick on 31 December—an increase of 62 ­percent in five days.

The report also noted that some patients were waiting up to 40 hours to be seen in A&E units and that vital operations are being delayed.

Hospitals across Lincolnshire this week declared a “critical incident” over “extreme and unprecedented” staff shortages.

The United Lincolnshire Hospital Trust said it is “unable to maintain safe staffing levels” leading to “compromised care” across its sites.

West Midlands Ambulance service bosses said that so many staff were off work that even the highest ­category of 999 calls were left ­waiting, and that there was “a major risk to patient safety”.

And it’s not just healthcare that is being affected. Fire services have been hit with almost a third of London’s fire engines out of action at points in the week before Christmas.

With a new term starting, schools will be next onto the frontline.

The Tories’ failure to develop a Covid education plan means they could easily become epicentres for a further spike in infection.

The department for Education made a series of last minute moves this week, announcing that masks should be worn at all times in ­secondary schools. This brought England into line with Scotland and Wales.

The department also announced a limited number of classroom air purifiers could be purchased.

Education secretary Nadhim Zahawi insisted that lack of staff could be dealt with by merging classes so that perhaps 60 or even 90 pupils are grouped together. It is not possible to keep schools safe from Covid under these circumstances— and neither is it possible for pupils to learn. Unions should act.

Zahawi’s instruction reveals the Tories thinking on schools. For all the talk about “lost education” the real focus is on keeping schools open under all circumstances so the Tories can proclaim its “business as usual”.

Much of this shambles could have been avoided with resources, good preventative measures and forward planning. But Johnson was never interested in the fate of ordinary people. His high stakes game was only to ensure his own political survival.

The Tories’ fear of damaging profits is driving their resistance to more effective Covid measures.

Writing in the Daily Mail newspaper, he proclaimed that England had “welcomed in 2022 with some of the least restrictive measures in Europe.”

“Curbs on our freedom must be an absolute last resort, and the British people rightly expect us to do everything in our power to avert them,” he wrote. “Since I came into this role six months ago, I’ve also been acutely conscious of the enormous health, social and economic costs of lockdowns. So I’ve been determined that we must give ourselves the best chance of living alongside the virus and avoiding strict measures in the future.”

As his column hit the printing presses, one of Britain’s leading statisticians predicted that the actual number of daily Covid cases could be closer to half a million, more than double than the figures currently being recorded.

Cuts have led to disaster

One of the most senior NHS bosses has attacked “a decade” of health cuts saying they are responsible for the service being unable to cope with the Omicron spike.

Chris Hopson, the head of the NHS Providers group, said that instead of investing in more care capacity, successive Tory governments had simply piled more pressure on to health workers.

The NHS has “not been able to grow capacity to meet growing demand,” he tweeted on 1 January.

Instead the health service “had to try to close the gap by asking staff to work harder, giving them an impossible workload, meaning they can’t provide the care they feel patients need.

“Staff flat out, especially given the level of staff absences.

“We will need to ask them to perform flexible heroics again if hospital Covid numbers continue to rise. We can’t keep doing this. Long term NHS capacity issues must be addressed.”

And Hopson had a warning for the future if a further spike in cases was detected from this weekend onwards.

“Next few days crucial,” he wrote. “Gvt must be ready to introduce new restrictions at pace if they’re needed.”

Workers at DWP offices including jobcentres reported that managers were attempting to reduce safety requirements, such as by scaling back cleaning.

But bosses backtracked after more than 1,200 PCS union members in the DWP joined an online meeting to debate their response.

More than 90 percent of people at the meeting said they were prepared to use Section 44 of the Employment Rights Act to walk out on safety grounds.

Just one day later, DWP bosses said jobcentre workers could give claimants the option of attending appointments and interviews by phone.