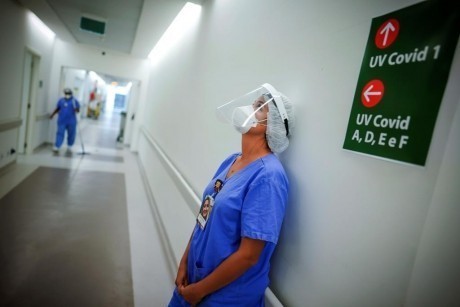 The COVID-19 virus is constantly adapting. The speed at which multi-celulars organisms evolve and mutate is slow. But viruses move fast, change fast, seeking a new advantage in their quest to exist and spread. The Delta variant of the coronavirus is proof.

First identified in India, the Delta variant has rapidly spread around the world. It has been identified in 77 countries and territories as of the end of June.

“It is the most hypertransmissible, contagious version of the virus we’ve seen to date, for sure—it’s a superspreader strain if there ever was one,” says Eric Topol, a professor of molecular medicine at US-based Scripps Research Institution.

Delta not only spreads fast, it hits hard. A new report in the English medical Journal, the Lancet, finds that the “hospitalization rate of patients with that variant was about 85 percent higher than that of people with the Alpha variant.”

Full vaccination provides some protection from the variants. But a single dose of Astra-Zeneca, widely used in Britain and Canada, provides about 70% protection from hospitalization from Delta. Even with full immunization, some deaths have been recorded.

Immunologists warn of a new surge in hospitalization and death centred in areas where rates of vaccination are low, in jurisdictions that adhered to a plan to get one dose to a wide number of people, and to demographics not yet vaccinated – especially young people.

And now immunologists are talking about the need for a 3rd dose, a booster to deal with variants, as COVID adapts to circumvent our defences. Expect to need boosters, probably annually, for the foreseeable future.

And that is just the situation in the handful of rich nations where vaccines are produced and consumed. But COVID is a global pandemic, and many nations have received next to no supplies of personal protective equipment or vaccines. Billions of human beings have not had 1 dose, let alone 3.

As long as western governments put the patent protection and profits of multi-national drug corporations ahead of world-wide public health, the virus will continue to spread and evolve. We can expect to see more, and potentially more dangerous variants.

Open for business = illness and death

Even as jurisdictions across Turtle Island drop restrictions and safety precautions, other countries are reeling from another surge of COVID hospitalization.

South Korea was once touted as a model of how to deal with the pandemic. Now Seoul is facing a new lockdown as the Delta variant spreads.

Australia thought it had everything under control, and as a result the percentage of its population fully immunized is relatively low. COVID Delta is taking full advantage. Sydney has toughened its restrictions to include a complete shutdown of retail except for essentials, and banning travel outside a 10 K bubble around the city.

England is going in the opposite direction. It has been relaxing restrictions for over a month and is about to drop them altogether. Scotland, Wales and Northern Ireland will make their own decisions. About 65% of its population is double dosed, mostly with domestically produced Astra-Zenica. AZ is the vaccine least effective against Delta.

In England, COVID case numbers are doubling every 10 days, and hospitalizations rose 50% just in the first week of July. Yet Boris Johnson and his Tory government seem determined to press ahead with their plan to drop all limitations to business and public events by July 19. Tory MPs shouted “Hallelujah” following the announcement.

“I wholly welcome this. It goes down the route of personal responsibility. It’s spot on,” said Tory MP Peter Bone.

This is insane. There is no solution to a global pandemic through “personal responsibility.” But it does set up the idea that, if you contract COVID Delta, or any other variant, it is your own fault.

Scientists have other ideas. In a letter published in the Lancet, Swiss professor of virology Isabella Eckerle wrote: “The decision can only serve as a warning negative example for other European countries… It is a dangerous and irresponsible situation to fully open now, and accept high infection rates in young age groups and especially children.”

In Ontario, “stage 3” reopening is ahead of schedule. Going to the mall, haircuts, eating out, baseball games, and summer vacations are the government priority, and a large portion of the population, stressed and inconvernienced by a year of on-again-off-again restrictions is yearning for a return to “normal”.

Ontario’s Education Minister regularly tweets that they are committed to full, in-person schooling in September. They assure us it will be safe, but when pressed for details they repeat that a plan for the looming school year is in the works. Then they announce an end to free rapid COVID testing for students and teachers.

Dr. Peter Juni, Professor of Epidemiology and Medicine and Chair of the Ontario Science Advisory Round Table, warns that the rush to reopen is premature. “Delta doesn’t care. If we are just patient and stick with the plan, we can safely reopen.” He calls for waiting until about 80% of the population is fully vaccinated.

But Doug Ford has surrounded himself with medical toadies who follow orders. This allows him to claim that he is “listening to the science” when in fact he is only hearing what he wants to hear: the cash register.

No politician wants to be the one to say there is no future without COVID, there is no going back. Every politician is subject to the demands of corporate donors and big business. As it has throughout the half-hearted responses to COVID on display in the rich countries, profit takes precedence over public health.