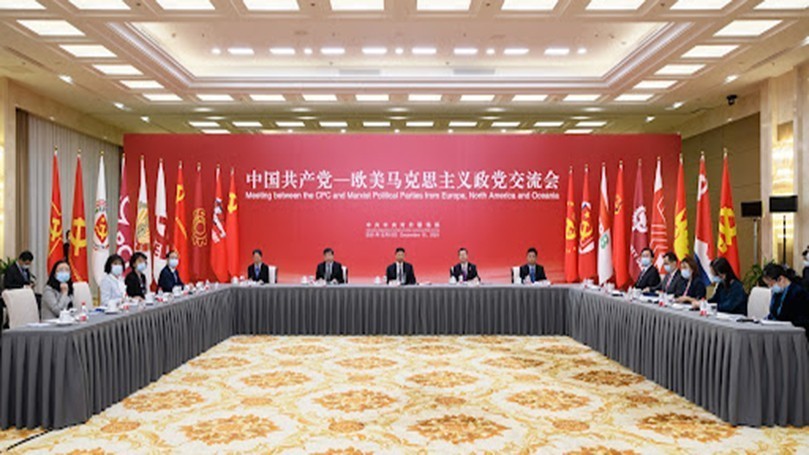 Democracy is a shared value of humanity. It does not belong to the United States, or to the capitalist world, alone. This was the theme of the Meeting of the Chinese Communist Party and Marxist Political Parties from Europe, North American, and Oceania held on December 15, 2021. The CPC hosted the event live in Beijing while Communist Parties attended from around the world through a video conference. The timing of this event and the subject matter were a direct response to Biden’s so-called Democracy Summit on December 9–10.

China has its own democratic system, being a socialist country, and a 5,000 year-old civilization. The term is called “whole-process people’s democracy” and although it does not have multiple parties competing for power (the CPC is not the only political party legal in China; there are eight others), grassroots decision making, public opinion, and mass participation are the bedrock of Chinese democracy. Not only in the political sphere are the people involved in decision making, but at the workplace too. Through the staff and worker congress systems and the involvement of labor unions, Chinese workers are able to participate in the management and running of state-owned companies. And even in 70% of private and foreign-owned companies, there are Communist Party groups. In fact, only in China is Walmart fully unionized. The idea of a single delegate from a Chinese province holding out on a popular high-speed rail system is unthinkable, while in the United States, a sole senator’s tanking an infrastructure bill that would benefit millions of Americans is business as usual.

The event started with the “Internationale” playing, with all attendees, both in person and over Zoom, rising for the duration of the Communist anthem. Comrade Song Tao, head of the International Department for the CPC, gave the keynote speech, addressing the crowd as comrades and friends.Song explained that democracy for the China and the Communist party means people being the masters of their own country and having a responsible government is receptive to their needs and well-being. He further stressed the need to revitalize the world socialist movement, saying that “the CPC will continue to work with Marxist political parties to jointly promote Marxism and world socialism in the 21st century.” Song stressed that the CPC would stand shoulder to shoulder with Marxist parties around the world.

The Communist Party of Australia spoke of the declining standards of living for indigenous people and of the recent AUKUS treaty that would see Australia purchase nuclear-power submarines for $100 billion dollars, and allow new military bases, effectively surrendering Australian sovereignty to become a military base for the U.S. The Australian comrades proposed an international Marxist school to help train and support the communist parties of the world. This proposal is worth exploring, as the CPUSA has recently hosted a national youth school, so why not international schools?

Gyula Thürmer, chairman of the Hungarian Workers Party (successor to the former ruling party of the Hungarian People’s Republic) pointed out the hypocrisy of the Biden summit, noting that Hungary had not been invited to it, not because it wasn’t “democratic” enough but because it was not a loyal supporter of European Union and U.S. policy. The comrade also warned of the danger of war between Russia and NATO with the tension along the Ukrainian border, brought about by NATO eastward expansion. 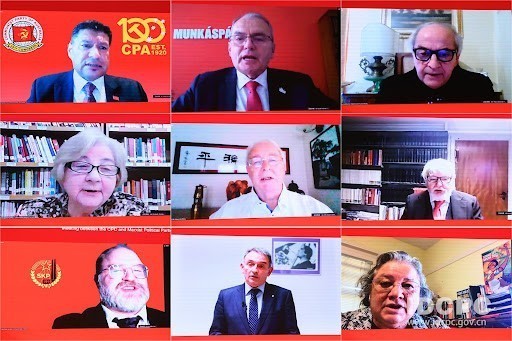 Mauro Alboresi, national secretary of the the Communist Party of Italy, told the participants that the theme of the meeting, democracy, was not just symbolic but a goal of Marxist parties around the world. He added that the COVID-19 pandemic has exacerbated the economic crisis, and in the midst of this, Marxism provides an alternative way forward.

Elizabeth Rowley, leader of the Communist Party of Canada, did not mince words, stating that “U.S. imperialism in particular faces increasing challenges to its global hegemony, and is striking out violently.” Again, the hypocrisy of the U.S. attempt to divide the world between “democracies and authoritarianism” is clear. Rowley noted that the Brazilian fascist president, Jair Bolsonaro was present at the summit for “democracy,” proving that, rather than a gathering of embattled democracies, Biden’s summit represented a gathering of the pawns and benefactors of U.S. imperialism. And why else would a man elected by no one to represent Venezuela, Juan Guaidó, be present? Rowley finished with “Capitalism is the disease, and socialism is the cure.”

Robert Griffiths of the Communist Party of Britain gave a stark report on the situation in Great Britain. He noted that, although “Brexit” represented a possibility to free the country from neoliberalism, the conversative government has ruined the economy, left young people at the mercy of vulture landlords, and attempted to weaken the powers of Scottish and Welsh parliament. A symptom of the income inequality in Britain is the growth of “second homes” for the ultra-rich in rural areas. “An alternative is not only possible, but essential,” concluded Comrade Griffiths.

Chairman of the CP of Denmark, Henrik Stamer Hedin, stated that the goal of the Democracy Summit was to return imperialism to the offensive after setbacks, including the failure of the Hong Kong riots (supported by the U.S.) and the rapid fall of the Kabul government in Afghanistan after the U.S. withdrawal. On the hypocrisy of the Biden summit, the CP leader said, “To them, democracy is just a word. The judgment on whether something is democratic hinges on whether or not the people are the masters.”

JP Väisänen, chairman of the Communist Party of Finland, was warm and amiable, inviting all the participants to Finland for an environmental and peace movement roundtable. Speaking of democracy, Väisänen said, “For us it is clear you can’t buy democracy. You can’t buy participation, you cannot buy culture, in Biden’s democracy, all of this is for sale.”

The CP of Spain, currently in government, joined calls from the CPC to create a new international order and a stronger world communist movement.

Finally, audiences viewed the pre-recorded speech by the co-chair of the CPUSA, Rossana Cambron. The U.S. ruling class claims that American democracy is the best in the world, but Rossana told the audience what U.S. democracy was really like: “All democracies have a class component, and in capitalist countries they are heavily tilted in favor of the bourgeois class. In our country it is structural, it is legislative, and it is ideological. It is expressed in our constitution through the electoral college system with its ‘winner take all’’ provision, through its chaotic rules about filibusters, gerrymandering congressional districts, and grossly uneven state representation at the Senate level.” While Biden seeks a crusade for democracy abroad, the reality is that American democracy is incomplete and is not in a state to be paraded in front of the world, especially after the attempted fascist coup on January 6 and the threat among the armed forces.  Rossana added,

The democratic, civil, and human rights of all working-class people are constantly under attack. They range from undercounting communities of color in the census, diluting the vote of people of color through gerrymandered political boundaries, voter suppression through voter ID laws, and disenfranchisement through mass incarceration. These attacks make it difficult for candidates of the working class to run for office because of the domination of corporate campaign financing and the high cost of advertising.

The international Communist movement and the fight for democracy are alive and well. Meetings like this one set the record straight: Communists are among the fiercest fighters for democracy.

How the “Polarized” Political Parties Work together against the Public Interest

Serve the people! On the 100th anniversary of the CPC